Back to the list
News
“It’s been a while since anyone came back from being down 2-0. It’s time to fix it!”. Tolpar is ready to salvage the series against Dynamo
“They want to make pretty plays, that’s where mistakes stem from”. Dynamo and Tolpar went to the shootout
“There’s too much attention on these two players!”. Amirov and Bashkirov can’t help Tolpar
“The boys thought they had it secured when they were up 2-0”. Irbis almost salvaged Game 2 in Yaroslavl
Dynamo vs. Tolpar, Loko vs. Irbis. Kharlamov Cup Semifinals schedule
“No one gets far in the playoffs without luck”. Dynamo Moscow proceeds to Kharlamov Cup Semifinals
“Amirov and Bashkirov gave confidence to the others”. Tolpar didn’t break after falling 8-2 and made it to semifinal round
“There will be another chance to compete for the Kharlamov Cup. U18 World Championship is a once in a lifetime opportunity”. Team Russia impacts JHL playoffs
KRYLIA SOVETOV KEEP THEIR PLAYOFF HOPES ALIVE, BELYE MEDVEDI RISE TO 2ND PLACE IN THE EAST. MARCH 2ND ROUND-UP
Share 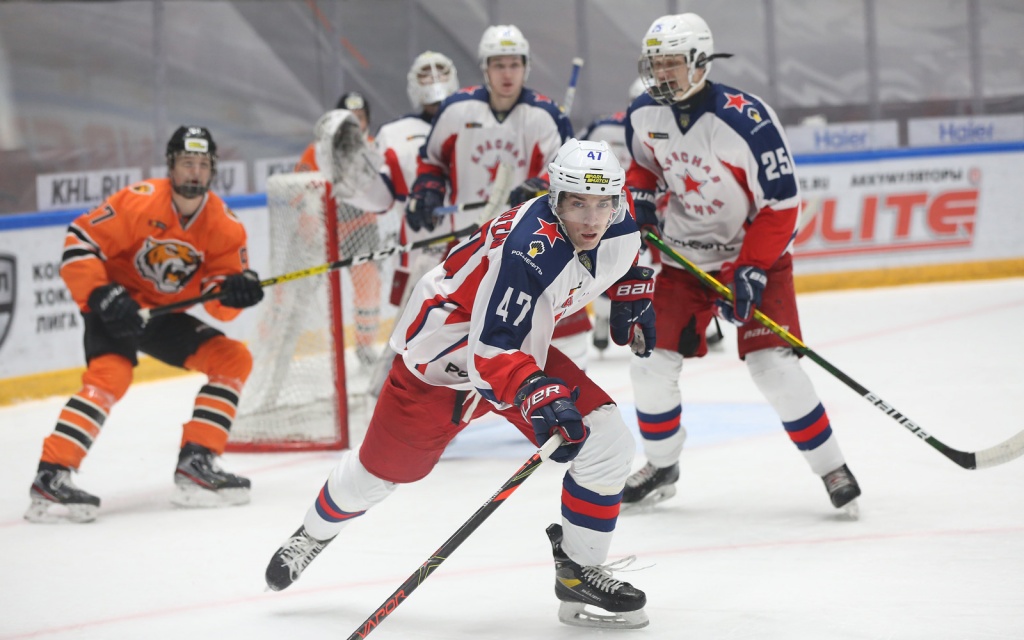 The game in Khabarovsk began with several offensive rushes by Moscow. Visiting Krasnaya Armiya, who continue to battle for a spot among the Top-4 teams of the Western Conference, opened shop in Mikhail Nikishin’s territory early on. However, it would be false to say the red-and-blue dominated. Amurskie Tigry were responding with menacing counter-attacks, providing Moscow goaltender Kirill Samsonov with plenty of work. It seemed that Krasnaya Armiya finally got the momentum fully on their side midway through the frame but they made a mistake, which led to a penalty and consequently boosted spirits of the ‘Tigers’. Late in the period the hosts scored two goals in a row – in a span of just 20 seconds Valentin Kovalenko and Vadim Sivchuk got a tally each past Samsonov and took their team to a 2-0 lead after 20 minutes of play.

Krasnaya Armiya tried to turn things around after the intermission but it didn’t quite work out. The visitors took another penalty and this time Amurskie Tigry capitalized on the ensuing power play – Ignat Korotkikh found the back of the net. Having established a 3-goal lead, Khabarovsk slowed the pace of the game down and focused on defense. ‘Army men’ pounced on the opportunity. The hosts took the next penalty and Prokhor Poltapov put the red-and-blue on the board. Just over a minute later Danila Khulapov pulled Krasnaya Armiya back to within one, truly inspiring his teammates for a comeback feat. Moscow spent almost the entire remainder of the period in the offensive zone and with 54 seconds on the clock Matvei Averochkin threw one past Nikishin to make it a 3-3 hockey game after 40.

Late goal paved road for Krasnaya Armiya to dominate in the third stanza. Amurskie Tigry defense had a tough time keeping the opposition at bay. Nevertheless, Moscow was able to get what they were looking for again. In a span of 90 seconds Averochkin and Khulapov got a tally each again. It seemed that Krasnaya Armiya won’t let it slip away from them but Khabarovsk were in no mood to surrender. A minute after allowed the fifth goal Amurskie Tigry got a power play opportunity and converted on it as Sergei Shmelyov found the back of the net. Glev Nikitin scored another one shortly after to tie it up again. Khabarovsk goal-fest took a pause after that as the teams opted to play out the remainder of the period at a much calmer pace without taking any risks. As a result, the game spilled into overtime. Danil Fyodorov capitalized on a power play and won the extra point for Amurskie Tigry as they enjoyed a 6-5 victory on home ice. 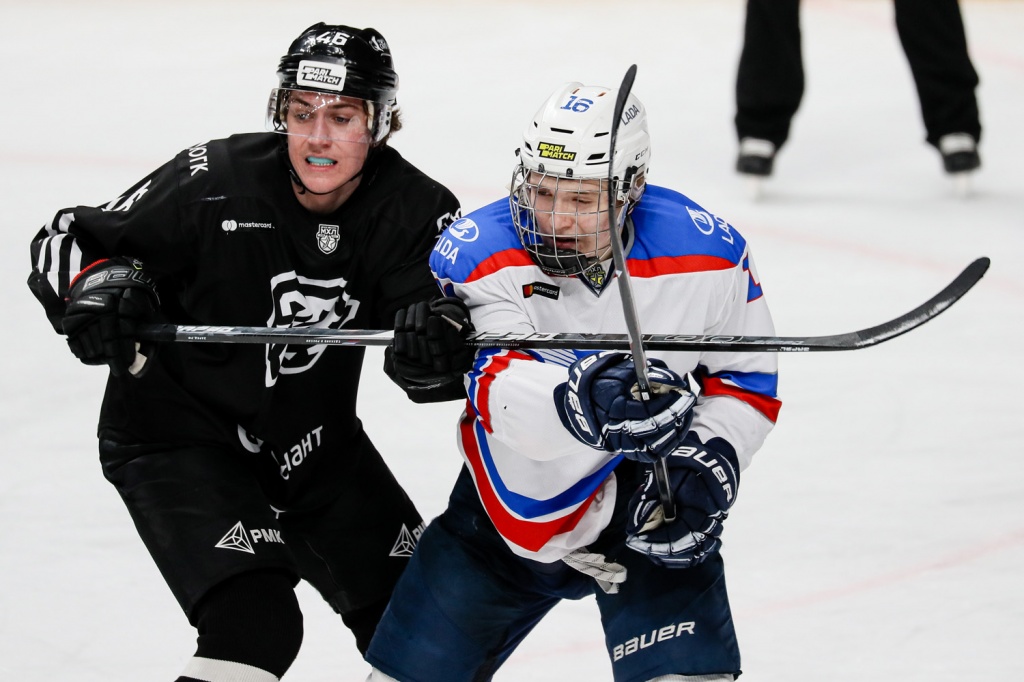 Belye Medvedi Chelyabinsk faced Ladiya Togliatti on home ice for the second part of the back-to-back series. The day before ‘Polar Bears’ won a hard-fought game 4-3 but this time around their victory was way more solid. The hosts got on the board just two minutes in – Leonid Kulishov sniped one on the far-side past Arseny Kokovashin. Chelyabinsk slowed the pace of the game down a little after that, while the visitors, on the contrary, picked it up and made goaltender Viktor Golovlev make several saves. Belye Medvedi rewarded their netminder for his excellent work with a goal in the second period – Dmitry Sheshin capitalized on a power play opportunity. Shortly before the intermission a brawl broke out on the ice leading to Sergei Makarov and Denis Ugryumov getting game-misconducts.

When third stanza was just 24 seconds young Danil Zinovyev scored another goal from the slot against Togliatti. Ladiya managed to solve Golovlev only seven minutes into the period as Oleg Nazarov found his target with a shot from the blue line. Chelyabinsk did better late in regulation as they went on to score two more goals. Sheshin got his second of the contest, while Vadim Shaveko put a cherry on top within the final five minutes. Belye Medvedi win 5-1 and conclude their regular season by rising to second place in the Eastern Conference standings. 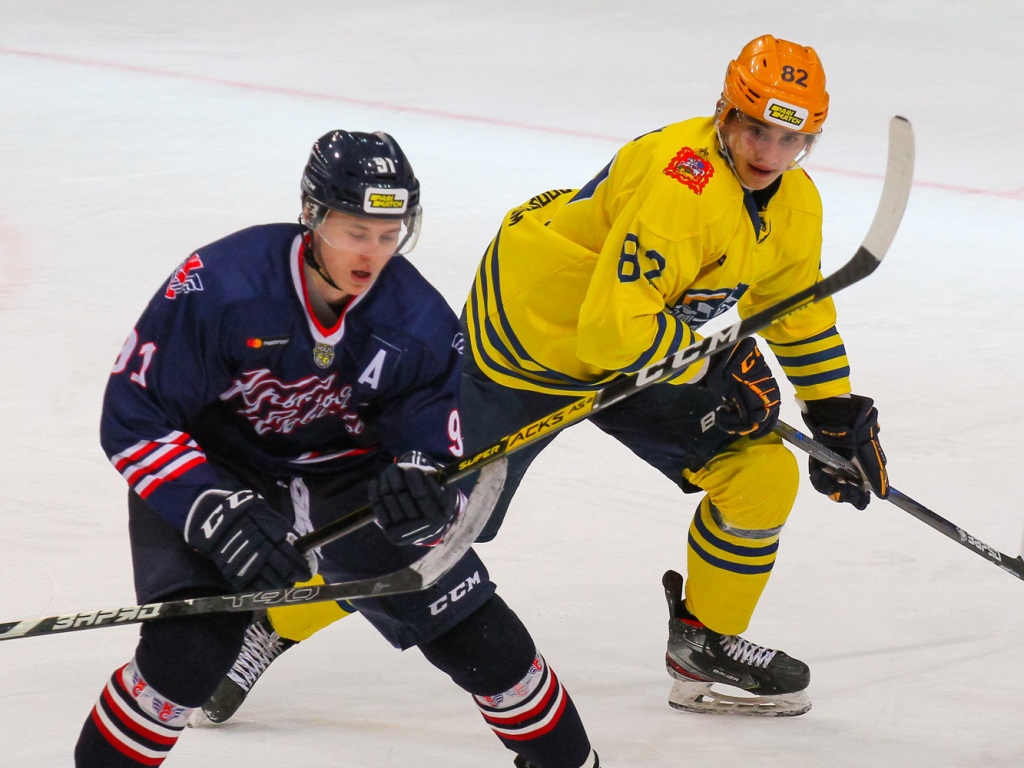 Krylia Sovetov Moscow had the biggest game of their season in Setun as they ran out of room for mistakes going into battle with JHC Altant Moscow Region. Mytischi left Khabarovsk with four points in a bag and increased the gap between them and ‘Soviet Wings’ to seven. Krylia Sovetov had to win every game from then on and hope for either Atlant or JHC Dynamo St. Petersburg to make mistake in their last matchups. The visitors managed to capitalize on their initial power play opportunity of the contest. Just 20 seconds after Daniil Ivanov took his place in the penalty box, Matvei Nosov sent one past Maxim Kloberdanets. The game was absolutely even as both teams kept creating scoring chances. The hosts pounced on one of theirs in the second period. Eight minutes in Artyom Didkovsky restored the parity on the scoreboard. The forward received the puck from Ivanov and left no chance for Matvei Botov with a shot from point-blank range.

Key moments of the game took place around the midway point of the third stanza. Moscow Region’s Roman Daryin got a double-minor and was shortly joined in the penalty box by Kirill Yaruta. Krylia Sovetov put pressure on Atlant defense and Ivan Guskov threw another one past Botov. The former got a little lucky on the play as the puck went into the net off an Atlant defenseman. A minute later ‘Soviet Wings’ improved their lead to 3-1. Ivan Klimkin capitalized on the second power play as well. Moscow had a nail-biter of a finish as they took a late penalty and Kloberdanes had to bail out his team on several occasions. Mikhail Kalashnikov did pull Atlant back to within one but the visitors failed to force overtime as they couldn’t find the equalizer in the remaining 45 seconds of regulation. With this 3-2 decision Krylia Sovetov keep their playoff hopes alive but they do need to win again tomorrow.