Back to the list
News
“In Junior Hockey League you can the game around in one shift”. How Dynamo watched Loko clinch a berth in the finals
“Tolpar was outplaying us”. Dynamo proceeds to the finals but the final score of the series doesn’t give it justice as players of both teams note
“Wounded beast is twice as dangerous. Tolpar have nothing to lose”. Dynamo is up 2-0 in the series, stays focused
“Imposing our brand of hockey and our game is the foundation of our success”. Irbis captain comments on the semifinal series against Loko
“It’s been a while since anyone came back from being down 2-0. It’s time to fix it!”. Tolpar is ready to salvage the series against Dynamo
“They want to make pretty plays, that’s where mistakes stem from”. Dynamo and Tolpar went to the shootout
“There’s too much attention on these two players!”. Amirov and Bashkirov can’t help Tolpar
“The boys thought they had it secured when they were up 2-0”. Irbis almost salvaged Game 2 in Yaroslavl
ALMAZ BEAT THE TOP TEAM, SKA-1946 SOAR PAST SPARTAK, OMSKIE YASTREBY LOSE THEIR LAST HOPE OF MAKING THE PLAYOFFS. FEBRUARY 28TH ROUND-UP
Share 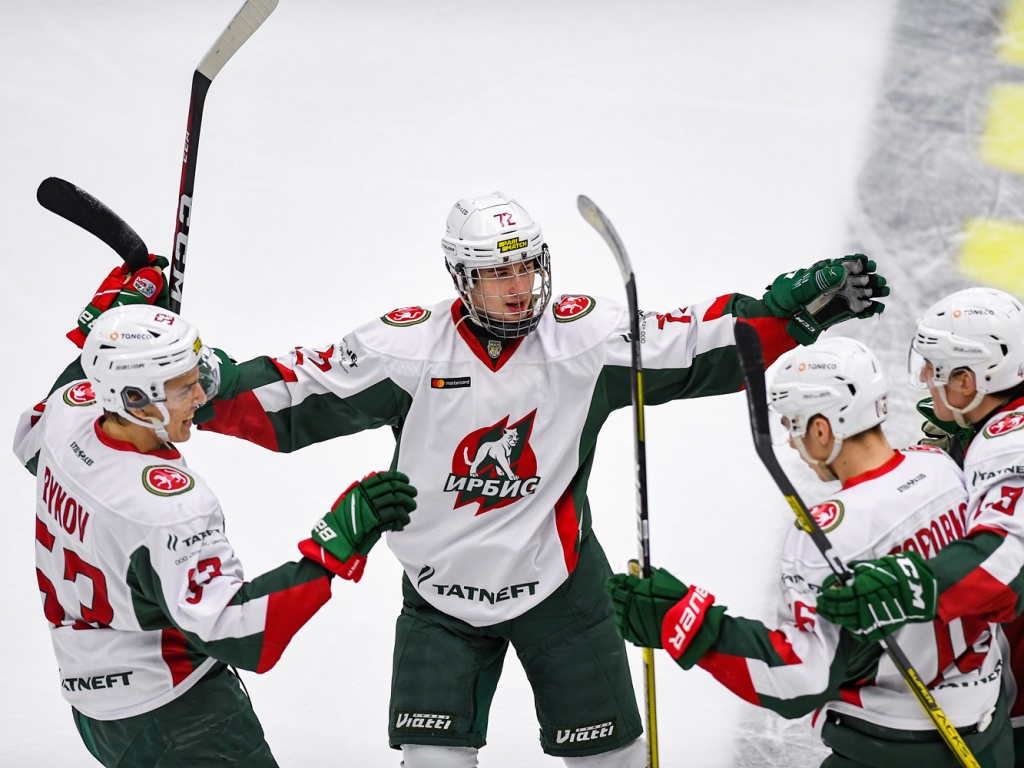 Omskie Yastreby, who faced fatal consequences in case of loss to Irbis Kazan in regulation, took the reins of the game into the hands right out of the gate and began creating scoring chances in the offensive zone. The visitors sometimes cracked under Omsk pressure but at even-strength as well as on a penalty kill goaltender Vladimir Mosin and his defensemen were able to keep the opposition at bay. Gradually the game evened out by the midway point of the period and it was the visitors who managed to break the ice. Ruslan Galimzyanov beat Andrei Mishurov in a 4-on-4 situation. Kazan grabbed the momentum after that and didn’t let Omskie Yastreby create anything before the intermission. However, that didn’t change anything on the scoreboard. Just as the hosts couldn’t convert on their opportunities early in the frame, Irbis couldn’t score either and led just 1-0 after 20 minutes of play.

Kazan continued to dominate on the ice after the intermission and create a lot of scoring chances. Mishurov had to bail out his team time and again, while Omskie Yastreby relied on dangerous counter-attacks. The visitors got another power play attempt midway through the frame. Despite the fact they couldn’t capitalize on the chance they did slip one in right after the ‘Hawks’ went back to playing full-strength – Vladislav Toporkov got the tally. Omskie Yastreby found themselves in a tight spot but they managed to convert on a man-advantage. The hosts pulled back to within one as Ivan Miroshnichenko capitalized on a power play but Kazan still had a 1-goal lead heading into the third stanza.

Irbis got really close to scoring their third goal of the game early in the period. However, Omskie Yastreby defenseman was able to stop the puck right at the goal-line. Irbis continued to pressure but gave up the momentum having committed three consecutive mistakes, which led to penalties. The ‘Hawks’ threw everything they had on Mosin but Kazan survived the 4-on-5 and 3-on-5 consequently. As a result, Irbis killed off all penalties but Omskie Yastreby continued to harass them at even strength as well looking to salvage the game. Nevertheless, the hosts made several mistakes late in regulation. Omskie Yastreby had two men in the penalty box for the last two minutes of play and even though they did survive it, they had no time left to look for the equalizer. With this narrow 2-1 loss Omskie Yastreby lose their last hope of making the playoffs this year.

SKA-1946 blow past Spartak, bounce back after losing the day before 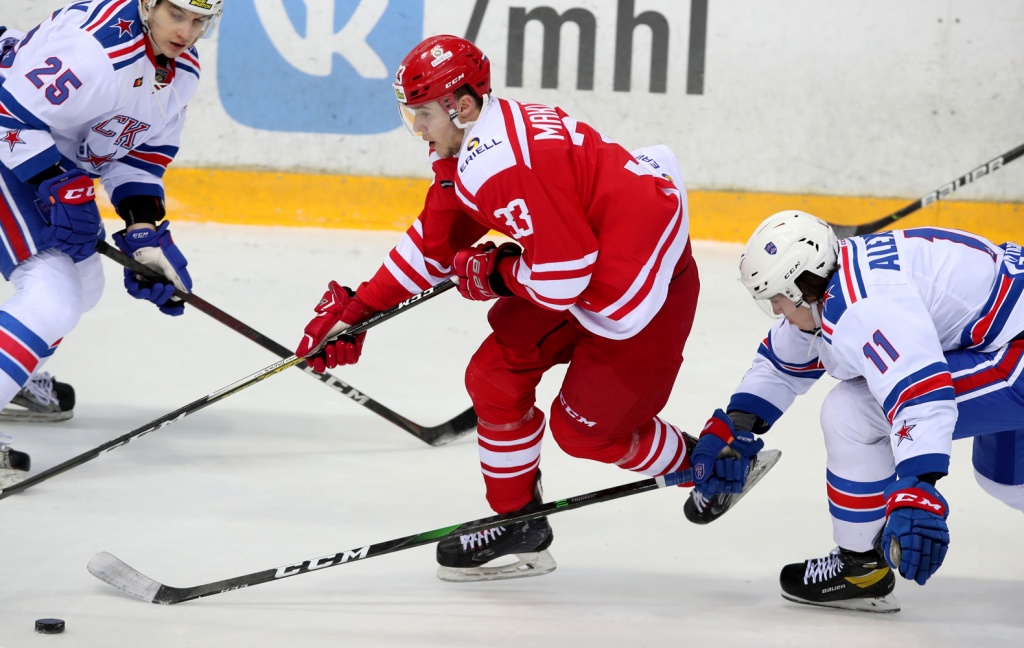 JHC Spartak faced off against their rivals SKA-1946 St. Petersburg in Moscow for the second game of the back-to-back series. The day before the red-and-white had scored a ton on ‘army men’ but the 46’s looked a very different team in this one. Artyom Zhuk threw one past Platon Zadorozhny in the opening minute of the bout and soon after that the visitors capitalized on their initial power play opportunity of the game – Nikita Shudin found the back of the net. St. Petersburg increased their lead to 4-0 in the second frame of action as they did the very same thing that Spartak had done the day before – Daniil Lazutin and Nikita Dishkovsky got a tally each.

Moscow managed to get a goal back only late in the period – Dmitry Silantyev converted on Maxim Krovyakov’s minor. Matvei Michkov shattered the kindled hope as he scored a goal early in the third stanza. He also hit the twince on a power play, which stemmed from Spartak getting a minor late in the second for delay of game. The visitors smartly worked the clock and got the win. Dishkovsky scored his second of the game late in regulation. SKA-1946 St. Petersburg roll to a 6-1 win in Moscow.

Almaz beat Loko, get their revenge and clinch playoffs 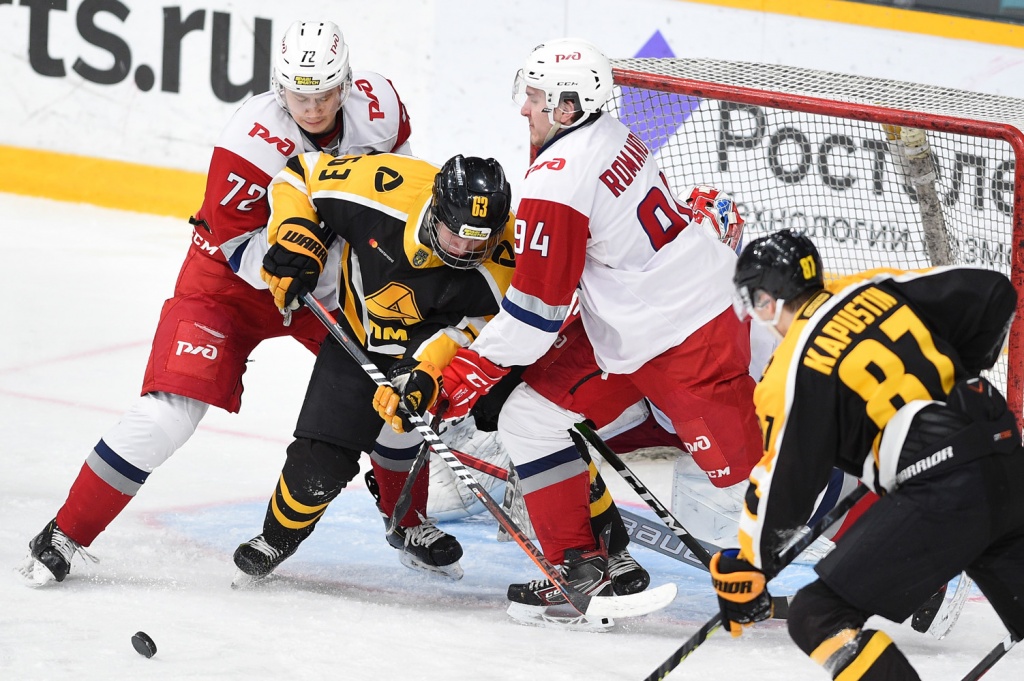 Almaz Cherepovets faced Loko Yaroslav for the second consecutive time on home ice. First period of play turned out to be the exact copy of the one the day before score-wise, albeit events unwrapped a little differently. Just 20 seconds past puckdrop Cherepovets top-scorer Daniil Belyalov solved Loko netminder Yegor Guskov. Yaroslavl responded with two lightning-quick rushes. Less than a minute after Maxim Denezhkin found the back of the net, the visitors capitalized on a power play attempt – Matvei Bannikov hit the target. Three minutes later the parity was restored. Maxim Nevolin slipped it in and the teams headed to the dressing-rooms tied 2-2 after 20 minutes of play.

Cherepovets re-captured the lead midway through the second period – Nevolin hit the twine for his second goal of the contest. The hosts managed to score a quick goal in the third frame as well – this time Vladislav Kuznetsov improved his team’s lead to two goals. Late in regulation Yaroslavl goaltender got a minor for interference but Cherepovets’ Yegor Chizhikov got the gate with two minutes on the clock. Final push led to nothing. Almaz Cherepovets enjoy a 4-3 win on home ice and become the sixth Western Conference team to clinch the playoffs.