Back to the list
News
“In Junior Hockey League you can the game around in one shift”. How Dynamo watched Loko clinch a berth in the finals
“Tolpar was outplaying us”. Dynamo proceeds to the finals but the final score of the series doesn’t give it justice as players of both teams note
“Wounded beast is twice as dangerous. Tolpar have nothing to lose”. Dynamo is up 2-0 in the series, stays focused
“Imposing our brand of hockey and our game is the foundation of our success”. Irbis captain comments on the semifinal series against Loko
“It’s been a while since anyone came back from being down 2-0. It’s time to fix it!”. Tolpar is ready to salvage the series against Dynamo
“They want to make pretty plays, that’s where mistakes stem from”. Dynamo and Tolpar went to the shootout
“There’s too much attention on these two players!”. Amirov and Bashkirov can’t help Tolpar
“The boys thought they had it secured when they were up 2-0”. Irbis almost salvaged Game 2 in Yaroslavl
OMSKIE YASTREBY’S AMAZING COMEBACK, WESTERN LEADERS WIN AND ANOTHER TEAM CLINCHES PLAYOFFS. FEBRUARY 27TH ROUND-UP
Share

Ten regular season games took place in Parimatch Junior Hockey League on February 27th. Two playoff berths are still up for grabs in the Eastern Conference, while Western teams continue to dispute the eighth place in the conference. We take a closer look at key Saturday games in this daily review on JHL official website.

Amazing comeback by Omsk, Yastreby remain in the race for the playoffs 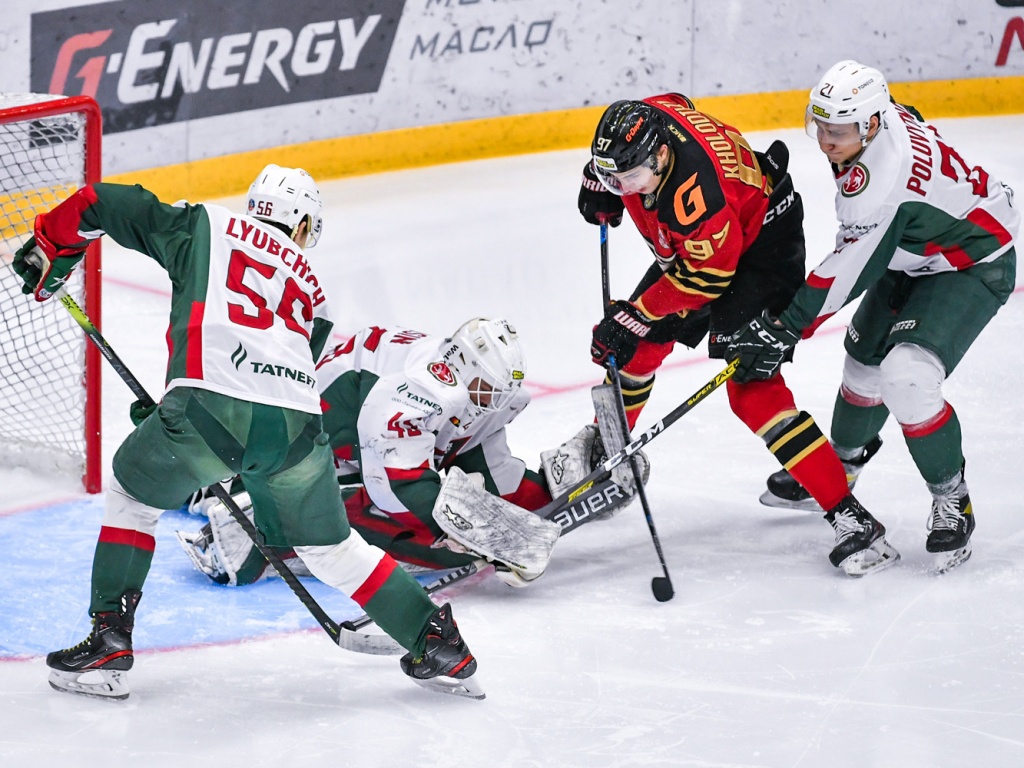 The game against one of the top Eastern Conference teams – Irbis Kazan – was key for Omskie Yastreby, who came into the tilt as the ninth team in the standings, 4 points away from the playoff zone. The ‘Hawks’ had to gain points to keep their post-season hopes alive.

The teams kept exchanging scoring chances in the opening period of action. Omskie Yastreby took three times as many shots (15 agianst 5), hit Vladimir Mosin’s post and yet couldn’t get on the board. However, five shots were enough for Kazan to throw one past Andrei Mishurov. With five minutes remaining on the clock to play in the period Vladislav Toporkov took a shot from a face-off circle and it went top-shelf on the short-side. Mishurov couldn’t see the puck for the players in front of him and didn’t react.

Second frame began with Irbis getting a penalty. Omskie Yastreby passed the biscuit around for some time and finally Gleb Trikozov tied it up. Kazan had to kill off two more penalties but they pulled through on both occasions.

With 11 minutes remaining to play in regulation the visitors regained the lead – Ruslan Galimzyanov got the marker. Omskie Yastreby, who had to win, rushed down the ice looking for the equalizer. Home team had two power play opportunities late in the period with 90 on the clock managed to make Kazan pay for taking another penalty, sending the game to overtime. The visitors dominated in the extra period. Irbis kept creating scoring chances but Andrei Mishurov bailed out his team time and again. The fate of the bout had to be decided in the shootout and the hosts prevailed. Mishurov stopped all four Kazan attempts, while Semyon Astashevsky scored the winner.

Omskie Yastreby enjoy a 3-2 shootout decision along with the comeback and keep their playoff hopes afloat. Irbis lose their fifth game out of the past seven. They are now already five points behind Chayka Nizhny Novgorod, who currently top the Eastern Conference. 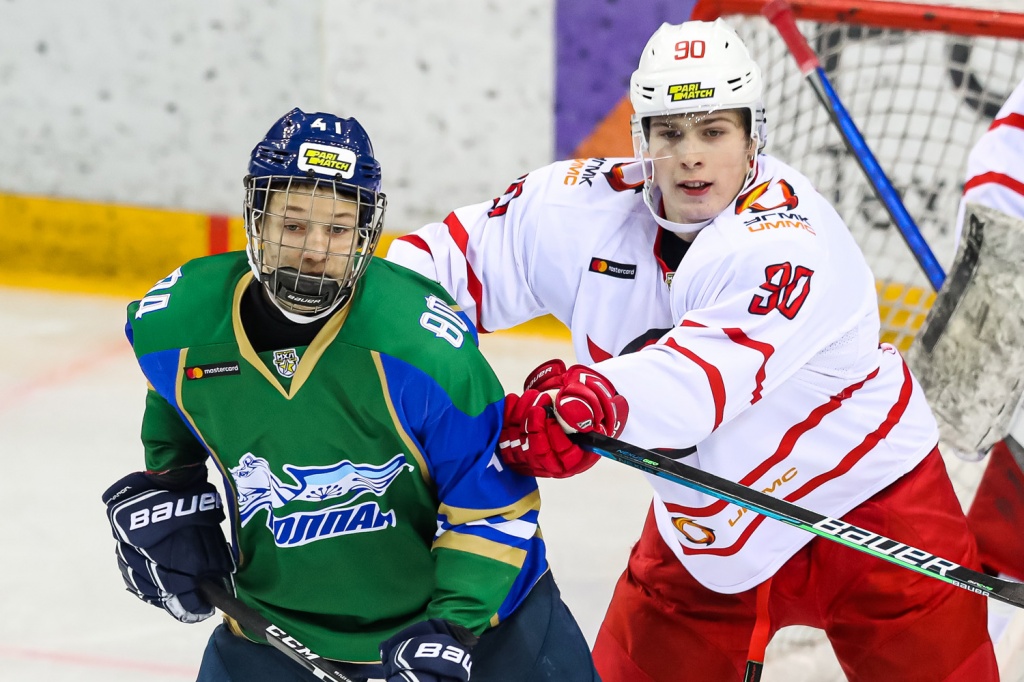 First period of the tilt reminded of the one the previous day – both teams were spending a lot of time in the offensive zone and Avto Yekaterinburg failed two convert on two power play opportunities. However, the flow of the game changed in the second frame of action. Boring donuts left the board as the teams combined for six goals over the stretch!

Tolpar Ufa and Avto came out all tied up for the second stanza but both of the teams managed to score three goals before the next intermission. Ilya Zakharov broke the ice right after the play resumed. Tolpar went on to score two consecutive goals past Semyon Vyazovoy – Pavel Dergunov and Alexander Pashin hit the twine. Yekaterinburg quickly recovered – Viktor Neuchev capitalized on yet another power play attempt. Midway through the period Yuri Salov put the visitors in the lead but Tolpar got the equalizer right away as Asylayev hit the target.

The hosts scored a quick goal to kick off the third period. Dergunov got his second tally of the tilt. However, with ten minutes remaining on the clock to play in regulation Neuchev restored the parity on the scoreboard, celebrating his second goal of the contest as well. 53rd minute of the game proved to be key. Tolpar managed to net two tallies in a row past Mikhail Isayev, who had replaced Pavel Grishin, after the latter had allowed his second goal. First Alylayev scored his second of the game and then Denis Goryukhin found the back of the net. Avto did their best to force overtime, pulling their netminder for the extra attacker but that led only to Tolpar scoring their seventh goal of the game.

Tolpar beat Avto for the second consecutive time as they take it 7-4 on home ice. 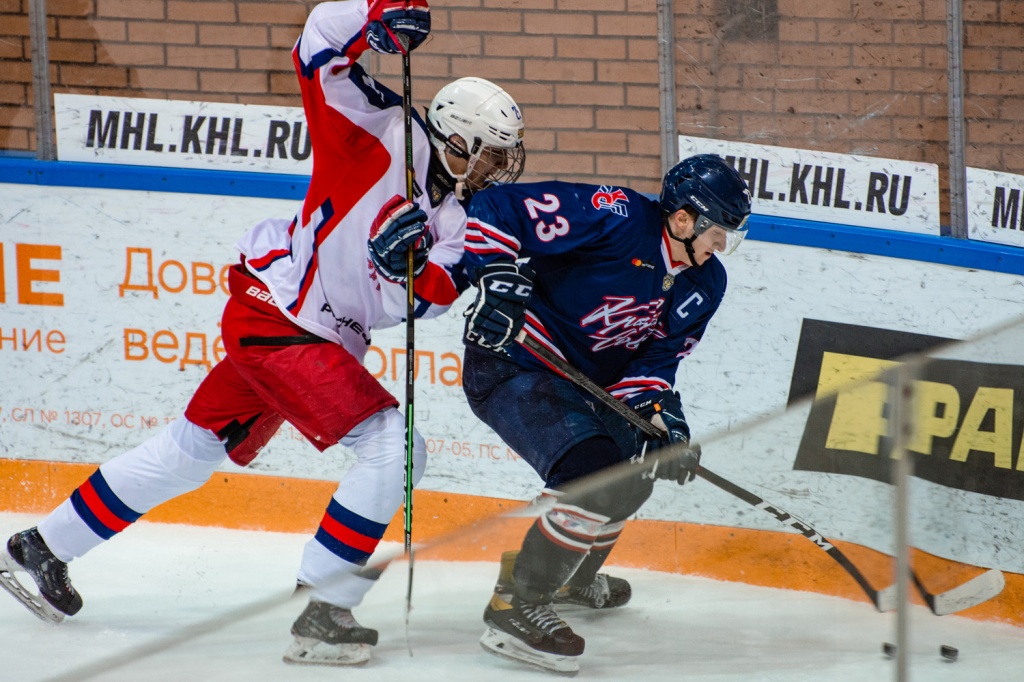 Krylia Sovetov, who see their playoff hopes melt away with every passing day, faced their Moscow rivals Krasnaya Armiya in Setun again. The day before ‘army men’ had managed to win a hard-fought game 3-2. First period of action featured two evenly matched teams but it was the visitors who found the back of the net – Evgeny Gorfinyak scored his second goal of the season. Notably, Krasnaya Armiya had to kill off two penalties prior to that. ‘Soviet Wings’ began the second period with just three skaters as Maxim Makarov and Andrei Yekimov took two consecutive minors late in the first frame. Home team killed off both of the penalties and brought the game back to even midway through the frame – Roman Shefer beat Kirill Samsonov in a 4-on-4 situation.

‘Army men’ did better late in the period as they went on to score two goals. Dmitry Zugan put Krasnaya Armiya back in the lead, while Malik Alishlalov capitalized on a power play opportunity with just 30 seconds before the buzzer. 13 minutes into the third stanza Valentin Shepelev gave Krylia Sovetov some home but, as had been the case in the previous game, their final push yielded no results. Zugan scored his second of the game in the last minute of regulation as hit the empty net. Krasnaya Armiya enjoy their second consecutive win in Setun.

Spartak beat SKA-1946, catch up to ‘army men’ in standings 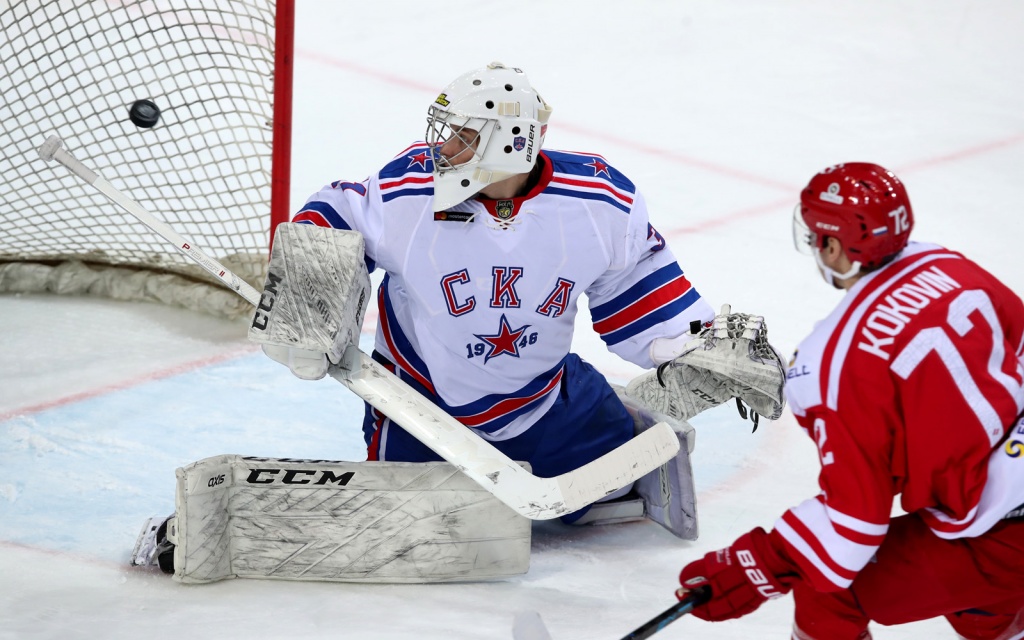 JHC Spartak faced off against their rivals SKA-1946 St. Petersburg in Moscow. The 46’s came into the game as the third best team of the Western Conference but the red-and-white eyed to catch up to them with a victory. Moscow stepped onto the ice determined to get the two points. The visitors were down 3-0 just ten minutes into the game as Lev Rogushin, Kirill Tagirov and Dmitry Silantyev scored on a power play. Pavel Romashkin was replaced by Valery Brinkman after that in goal for St. Petersburg but it took Spartak just 30 seconds to throw one past him as well – Matvei Kokovin improved the lead to 4-0. ‘Army men’ took over four times as many shots as Spartak in the second period of action but it changed nothing on the scoreboard. Moscow goaltender Dmitry Kulikov made several spectacular saves.

St. Petersburg had the upper hand in the third stanza as well, the only difference being that they finally found a way to get one past Kulikov. Matvei Michkov’s marker seemed promising as the youngster hit the twine just 32 seconds into the frame. Alexei Tsyplakov got another goal back to boost SKA-1946’s spirits but that was all Kulikov was willing to get past him in the game. In the last minute of regulation Kirill Tagirov and Artyom Zhuk dropped the gloves. The bout was the final event of the game. JHC Spartak Moscow enjoy a solid 4-2 win on home ice.

Almaz lose to Loko in Cherepovets 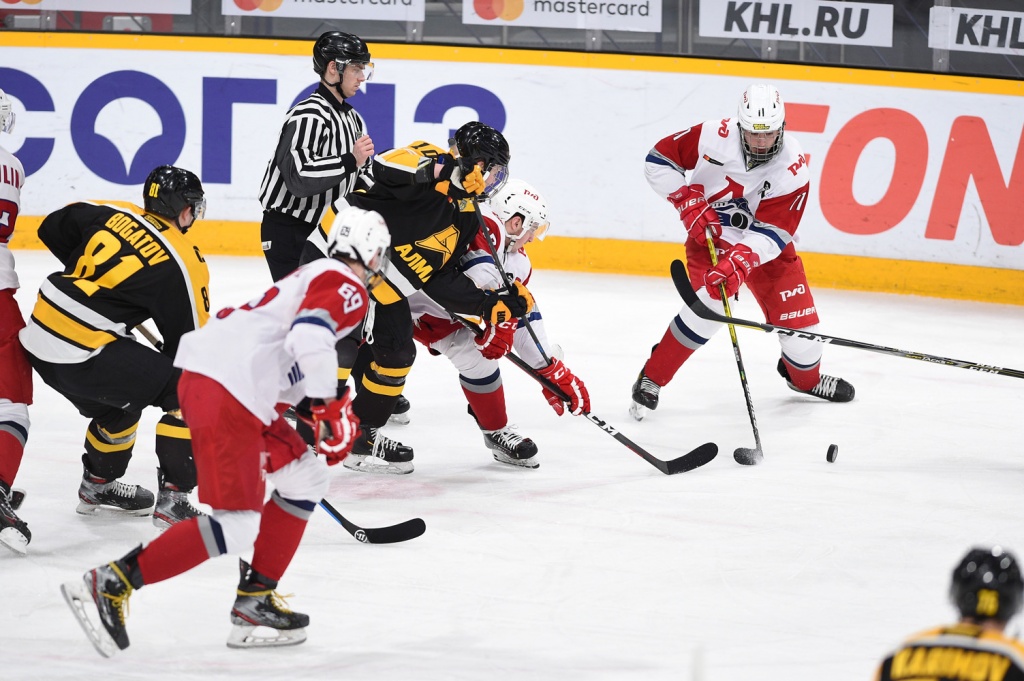 In one of the most fierce Western Conference rivalries Almaz Cherepovets played hosts to Loko Yaroslavl. First period of action was truly hard-fought. Cherepovets scored two quick goals as Vladislav Kuznetsov and Artur Yegor found the back of the net. However, in the very next shift defenseman Vladislav Lukashevich got a goal back. With three minutes remaining to play in the period Vladimir Korablyov made it a 2-2 hockey game. Loko had the momentum on their side in the second stanza, although the visitors had a great chance to get back in the lead as the opposition took two consecutive penalties – Yaroslavl were able to survive the 3-on-5. Almaz, on the contrary, couldn’t kill off a minor of their own – Nikita Kiryanov put the ‘railway men’ in the lead. Yaroslavl carried a 3-2 advantage into the third period.

First half of the final period featured a lot of penalties, one of which Loko turned into another goal – this time Daniil Tesanov found his target. With six minutes remaining to play in regulation Cherepovets had a penalty shot called against them and Nikita Kiryanov went on to convert on it for his second tally of the contest. As a result, the ‘railway men’ enjoy a 5-2 win on the road and increase the gap to JHC Dynamo Moscow for six points. However, the blue-and-white have a game against Mikhailov Academy Tula in hand.