Back to the list
News
“In Junior Hockey League you can the game around in one shift”. How Dynamo watched Loko clinch a berth in the finals
“Tolpar was outplaying us”. Dynamo proceeds to the finals but the final score of the series doesn’t give it justice as players of both teams note
“Wounded beast is twice as dangerous. Tolpar have nothing to lose”. Dynamo is up 2-0 in the series, stays focused
“Imposing our brand of hockey and our game is the foundation of our success”. Irbis captain comments on the semifinal series against Loko
“It’s been a while since anyone came back from being down 2-0. It’s time to fix it!”. Tolpar is ready to salvage the series against Dynamo
“They want to make pretty plays, that’s where mistakes stem from”. Dynamo and Tolpar went to the shootout
“There’s too much attention on these two players!”. Amirov and Bashkirov can’t help Tolpar
“The boys thought they had it secured when they were up 2-0”. Irbis almost salvaged Game 2 in Yaroslavl
EASTERN FAVORITES ENJOY WINS, MAMONTY YUGRY AND KRASNAYA ARMIYA CLINCH PLAYOFFS. FEBRUARY 26TH ROUND-UP
Share 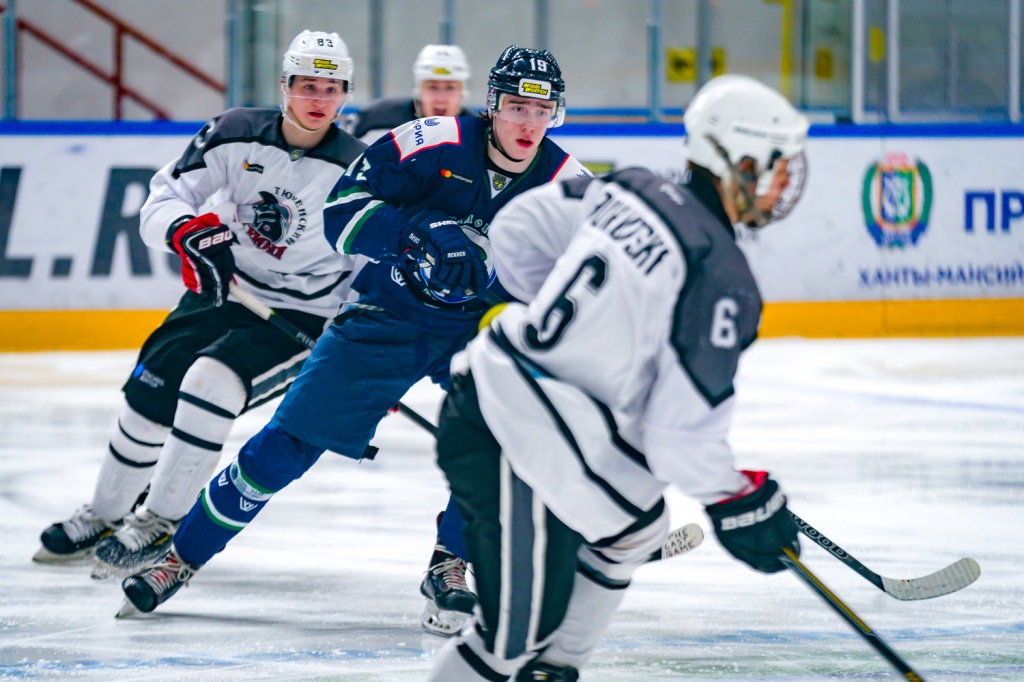 Mamonty Yugry, who came into the game as favorites, got off to a decent and aggressive start. Tyumensky Legion took their first penalty just two minutes in and five minutes later Bogdan Senotov whistled one past Nikita Tkachuk to open up the scoring. Having established a lead, Khanty-Mansiysk didn’t even think about letting up – they continued to buzz around the offensive zone and create scoring chances, peppering Tyumensky Legion with shots from all over the ice. Midway through the period the ‘Mammoths’ doubled their lead. Ivan Vorobyov beat Tkachuk off a great feed by Alexander Dobrovolsky. However, the visitors brought the differential back to within one soon after that – Alexander Luzhin sieved one past Ilya Stupin just two minutes later. That helped Tyumen to come back to their senses and set shop in the offensive zone for a while. Nevertheless, Mamonty Yugry defensemen were able to keep the opposition at bay. As a result, despite the fact that the game evened out towards the end of the period, Khanty-Mansiysk were still in the lead after 20 minutes of play.

Early minutes of the second period proved to be quite eventful. The teams combined for three penalties in the first five minutes, two of which were taken by the visitors. Second penalty turned out to be fatal for them – Vasily Atanasov finished off a passing play with an accurate shot. That set the ton for the entire stretch. The hosts were more aggressive and bold than Tyumensky Legion, spending more time in the offensive zone and creating a ton of scoring chances. However, Legion’s defensemen were able to cope with it time and again. The visitors rarely crossed the offensive blue line themselves. The only exception being the late two minutes of the stretch when the hosts were down a man after the very same Atanasov took a penalty. But – just as Mamonty Yugry – Tyumensky Legion failed to capitalize on their opportunities and Khanty-Mansiysk went into the third stanza carrying a 3-1 lead.

The game followed a similar scenario in the third stanza. Mamonty Yugry continued to control the puck for long stretches of time and spend time in the offensive zone but they had trouble cracking Tyumensky Legion’s defense. Gradually the tempo of the game went down and the number of scoring chances diminished. However, Yegor Chernyakov woke everyone up midway through the frame as he sent another one past Tkachuk with a well-placed shot. The teams picked up the pace after that once again. The latter was especially true for the visitors, who created an excellent chance to get another goal back and restore the intrigue in the game. They couldn’t capitalize on yet another power play opportunity and as a result Alexander Dobrovolsky set the final score with two minutes remaining to play in regulation. Mamonty Yugry Khanty-Mansiysk enjoy a solid 5-1 win over Tyumensky Legion on home ice. 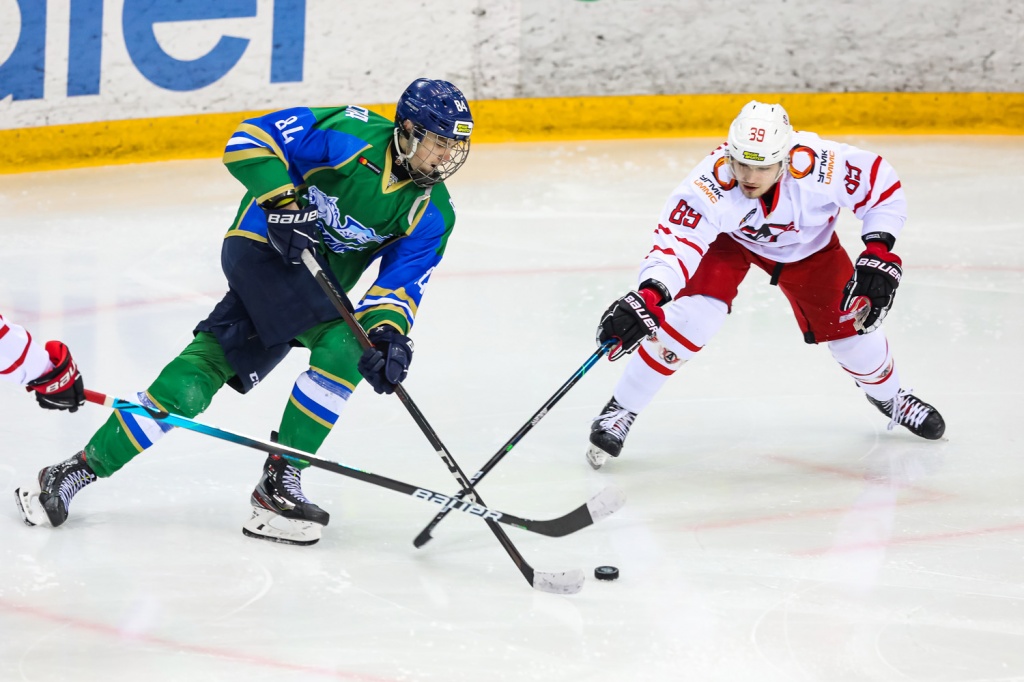 Tolpar Ufa played hosts to Avto Yekaterinburg. Both teams are at the top of Eastern Conference. Yekaterinburg eyed to catch up to Chayka Nizhny Novgorod in the standings with a win. As for Ufa, they had a chance to crack the Top-3 with a success on home ice. The hosts definitely had the momentum on their side in the opening period of play, which they were able to convert into a goal. Timur Valeyev threw one past Mikhail Isayev 14 minutes in. The visitors turned things around in the second frame and brought it back to even midway through it – Semyon Bondar sniped one home, while Daniil Zaitsev and Avto top-scorer Ilya Zakharov drew the helpers.

Yekaterinburg continued to dominate in the third stanza. The visitors had two power play opportunities and even scored a goal but it was cancelled as the puck went across the line after the play had been whistled dead. Regulation and overtime solved nothing. The fate of the game had to be decided in the shootout and Alexander Pashin won it for Tolpar.

Stalnye Lisy beat Ladiya, get past Sputnik and Omskie Yastreby in the standings 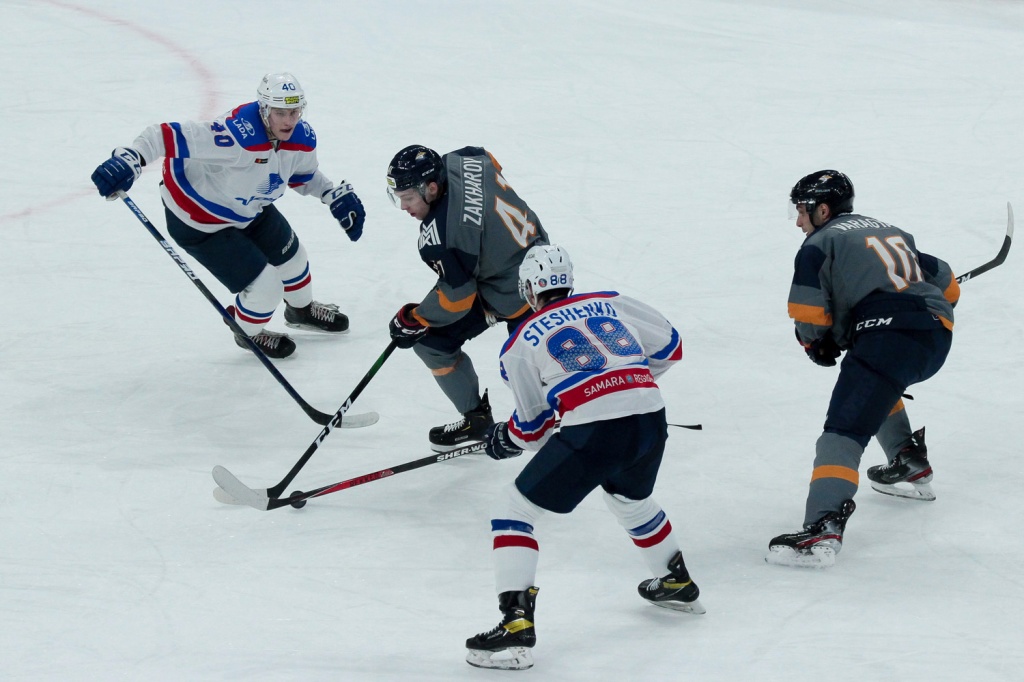 Stalnye Lisy Magnitogorsk, who continue to battle for a spot among Top-8 teams of the Eastern Conference, came out hard for the second game of the back-to-back series against Ladiya Togliatti. Goaltender Arseny Kokovashin was up against a flurry of shots ever since the puckdrop. The visitors couldn’t cope with the pressure. They take a penalty four minutes in and Valentin Zhugin opened up the scoring on the ensuing power play. However, Stalnye Lisy almost allowed a shorthanded goal but Ladiya couldn’t finish the job. The game evened out towards the midway point of the period. The teams took turns in creating scoring chances and taking shots on net, while both goaltenders were making saves. As the first intermission approached, the visitors increased their pressure. Fyodor Svechkov was in the spotlight and yet Togliatti couldn’t tie it up before the buzzer. Stalnye Lisy carried a narrow lead into the second frame.

The following stanza truly was a see-saw. The teams kept the pace of the game high throughout the stretch, exchanging scoring chances and giving a chance to both goaltenders to shine. There were just two exceptions – early in the period Magnigorsk found themselves down a man, which allowed Ladiya to throw everything they had in the following two minutes at Ilya Nabokov. Nevertheless, Stalnye Lisy were able to pull through. The second exception came late in the period. As the buzzer approached the hosts were getting the momentum on their side. They set up shop in Kokovashin’s territory and unlike Togliatti capitalized on their chances – with four and a half minutes till the second intermission Roman Kantserov one-timed it home. 90 seconds later Ilya Kvochko chipped in another one as he tapped it home off Ruslan Gospodynko’s fee. Thus Stalnye Lisy had a 3-0 lead following 40 minutes of play.

Magnitogorsk looked to secure the win early in the third period but their early push was fruitless. Soon after that Togliatti got a goal back – five minutes into the period Stepan Steshenko received the puck in front of the net and got it past Nabokov. Sensing the game might be salvaged, the visitors threw everything they had on offense, locking Stalnye Lisy in their defensive zone. However, Magnitogorsk were able to keep the opposition at bay and the game evened out once again. Togliatti decided to roll the dice with the extra attacker late in regulation but that only helped Stalnye Lisy to put the game away. Danila Yurov and Zakhar Zakharov scored an empty-netter each in the last minute of regulation and sealed the win for the hosts. Stalnye Lisy win 5-1 in Magnitogorsk. 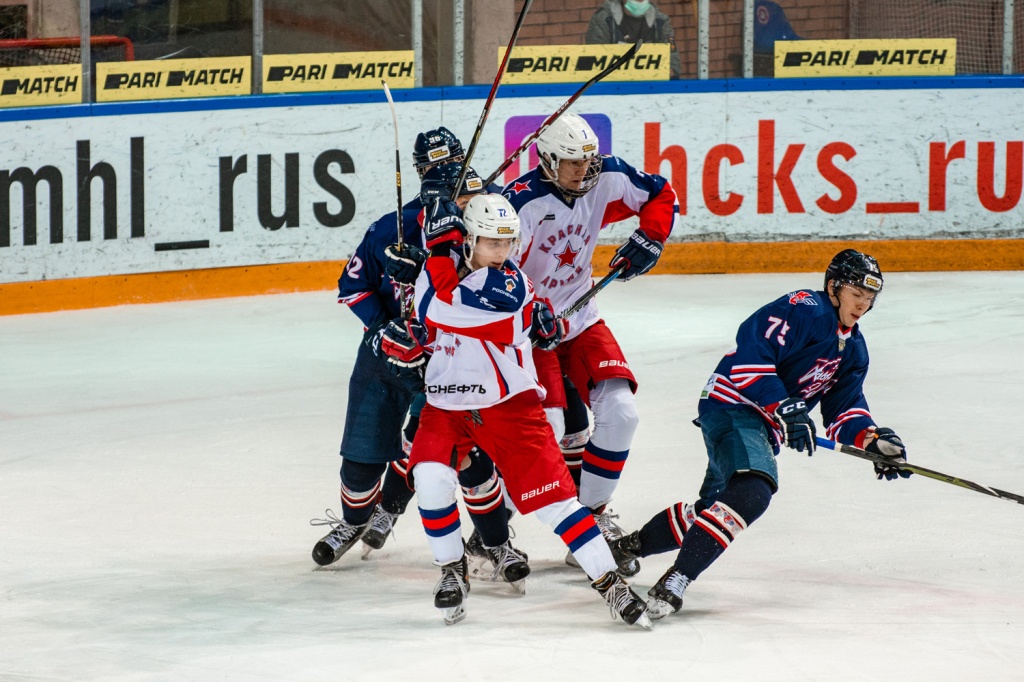 Krylia Sovetov had to win another game in Setun. After a successful series against JHC Dynamo St. Petersburg, Moscow had to get everything they could from a back-to-back against a mighty foe and their rivals – Krasnaya Armiya. ‘Army men’ eyed to lock up a playoff berth with a win. ‘Soviet Wings’ had to get two points to keep their playoff hopes alive. The hosts took just two shots on Kirill Samsonov in the opening period of play, while the visitors capitalized on their first power play opportunity of the game – Danila Khulapov broke the ice. Krasnaya Armiya improved their lead to 3-0 with two quick goals in the second frame. Artyom Duda found the back of the net just over a buck into the stanza and soon after that Danila Khulapov scored his second of the contest. The hosts had to score at least a goal before the intermission and they were able to pull it off – Artyom Zakharov threw one past Samsonov late in the frame.

Seven minutes into the third stanza Krylia Sovetov scored another one. Ildar Kashafetdinov took a shot on Samsonov from mid-range and Vitaly Lebyodkin found himself in the right place at the right time to bury the rebound. The hosts threw everything they had at Samsonov late in regulation but the latter bailed out his team, including a terrific save in the dying seconds. With this 3-2 win Krasnaya Armiya Moscow clinch the playoffs.