FROM FULL-FACE MASK TO VISOR IN ONE DAY. NIKITA CHIBRIKOV COMMENTS ON OVECHKIN’S RECORD, EUROHOCKEYTOUR AND KHL FROM FULL-FACE MASK TO VISOR IN ONE DAY. NIKITA CHIBRIKOV COMMENTS ON OVECHKIN’S RECORD, EUROHOCKEYTOUR AND KHL

SKA-1946 St. Petersburg forward Nikita Chibrikov turned quite a few heads at the latest Eurohockeytour. The 17-year-old became one of the Top-3 youngest players ever to make a debut for national Team Russia and then almost broke Alexander Ovechkin’s record as he scored a goal in a game against Team Czech Republic. After returning from the tournament Chibrikov compared making debut for Team Russia and in KHL, shared his thoughts on tying age-related records and confirmed he was ready to compete in Kharlamov Cup Playoffs.

- Team Russia invited as many as two 5-man units eligible to play in Junior Hockey League to compete at the recent Swedish Games.
- Junior lines did their best to keep up with men’s status of the tournament. I knew a lot of guys on the team. It really helped me to adjust to a new team for me. Competing at such a level boosted my confidence. I will always remember winning the Swedish Games!

- You made a name for yourself at the third Eurohockeytour of the season. Do you have any regrets that you hadn’t been called up to play for Team Russia at Karjala Cup, where U20 Team Russia prepared for the 2021 World Juniors?
- I was a member of extended roster for Karjala Cup. However, I didn’t make the final cut. That means there were players that were better than me. I don’t have a regrets and I’m not disappointed.

- Two Junior Hockey League players got injured at the tournament – Marat Khusnutdinov and Shakir Mukhamadullin. Perhaps, not everyone came in with the right physical conditions to compete at men’s level?
- The age is of no difference here. Young players were ready to play against grown men. It’s obvious from KHL games and recent Eurohockeytours. As for the injuries, it was just an unfortunate turn of events. Unfortunately, the guys fell awkwardly. It could have happened to anyone.

- You scored a goal and two assists for three points in as many games at the Swedish Games. You netted your first tally with just a few minutes remaining to play in the tournament. Were you worried you might not have enough time to get a goal?
- The game was winding down to an end but I wasn’t worried that I might not have enough time to score. Every player wanted to score in that game. Our team was doing so well. I just did my best to get everything out of every possible situation. I wasn’t set on scoring a goal at all costs. I was rather thinking what I could do better to be more useful to my team.

- You became one of the youngest players to score a goal for national Team Russia at the age of 17 years and 364 days. Are you frustrated you couldn’t beat the age record set by Alexander Ovechkin?
- Ovechkin and I had just a few days of a difference. I wasn’t frustrated I didn’t break his record. I’m just happy I found myself in the same conversation with such a great player as Alexander. Ovechkin didn’t react to it in any way. He didn’t text me. After all, I didn’t beat his record! 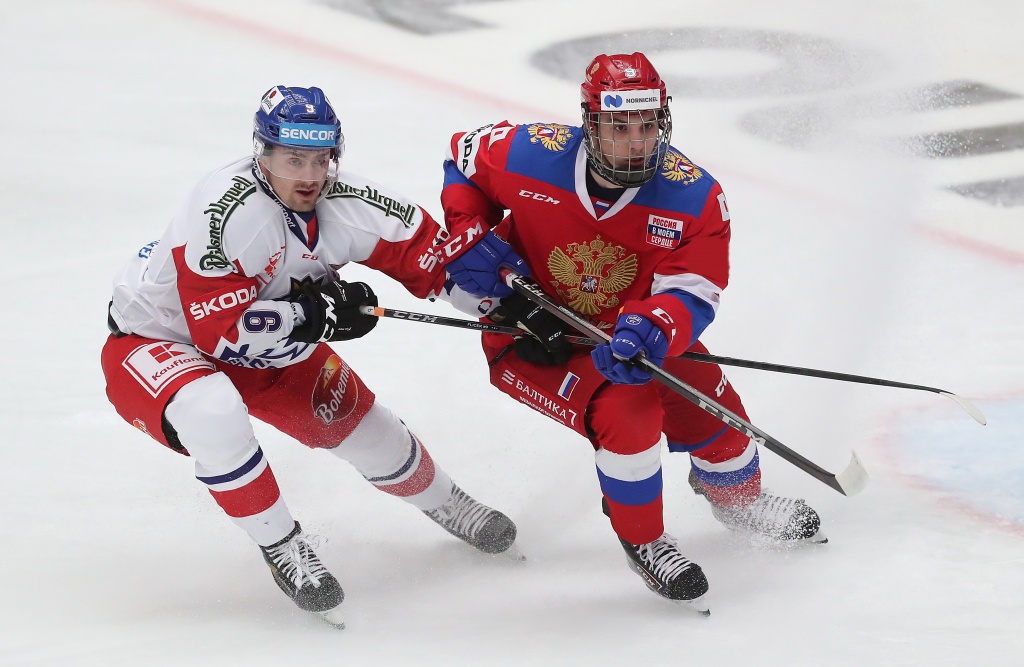 
- After returning from Team Russia you played two games in two days.
- I landed with the team at around four o’clock in the morning. I was home at about five. And at nine in the evening I already played for SKA-Neva in VHL! I played at full strength and worked really hard. However, I didn’t capitalize on a penalty shot attempt. I didn’t take into consideration the goaltender’s specifics and that the ice was not of great condition towards the end of the game. After the game I found out that I was going to play in KHL the next day. Marat Khusnutdinov got banged up playing for Team Russia so I was called up to fill in for him. I forgot all about fatigue. It was great to play in KHL on my birthday!

- You wore a full-face mask playing for SKA-Neva and the next day you donned a visor with SKA!
- At the pre-game practice the team congratulated me with my birthday and presented me with a visor. I screw it on right away. It’s a new sensation for me but I got used to it pretty quickly. I got comfortable with it already at the warm-up.

- Early in the season you were one of the youngest rookies to play in KHL and now you’re one of the youngest players to compete for Team Russia. Were there any similarities between making debut for Team Russia and in KHL?
- Making KHL debut was a exciting moment. It was my first game at men’s level. I was more calm when I got called up to Team Russia. I already have had enough KHL and VHL games under my belt so I was more experienced and had a cooler head.

- What did SKA St. Petersburg head-coach Valery Bragin told you after you returned from Team Russia?
- Valery Nikolayevich praised me and gave me advice. He said I did well at the tournament and that I had to keep moving forward. Most importantly, he trusted me with a roster spot and let me play against Spartak Moscow.