“I COULD HAVE SCORED FOR TEAM RUSSIA BUT I COULDN’T CAPITALIZE ON MY CHANCES”. NIKITA LUKHOVSKOY OPENS UP ABOUT HIS DEBUT FOR OLYMPIC TEAM RUSSIA “I COULD HAVE SCORED FOR TEAM RUSSIA BUT I COULDN’T CAPITALIZE ON MY CHANCES”. NIKITA LUKHOVSKOY OPENS UP ABOUT HIS DEBUT FOR OLYMPIC TEAM RUSSIA

Forward Nikita Lukhovskoy is in his sophomore Junior Hockey League season. He made his league debut with Almaz Cherepovets and led the team in scoring in his rookie year with 27 goals, 23 assists and 50 points in 59 games. In the summer of 2020 the forward was a part of a trade between Dynamo Moscow and Severstal Cherepovets, joining the blue-and-white. On Dynamo Lukhovskoy plays on one of the most productive lines in the league this season. The forward is currently second and third on Dynamo in points and goals respectively with 23 goals and 29 assists for 52 points in 48 games. He’s also among Top-5 scorers of Junior Hockey League. This February Lukhovskoy was called up to Olympic Team Russia to compete at Kazakhstan Hockey Open.

“I learned about the call-up from my agent. He sent me the roster once he came across it. It came absolutely out of the blue. I wasn’t even thinking about getting invited by Team Russia, seeing that I have never played for U18 or U20 Team Russia. And then all of a sudden I get invited to play for men’s team!”, says Lukhovskoy.

- It was one of the first times you played against grown men n your career. You have been called up to a VHL team before and even made the league debut.
- This team boasted men – in terms of size and experience. So there were a lot of physical battles. The brand of hockey was tougher and fast than in Junior Hockey League. Experienced players always supported us, gave advice and told us how to do things right. The fact that I knew a lot of guys on the team helped me to adjust. For instance, my Dynamo teammate Alexander Kisakov was also on the team, and Evgeny Stavrovsky, under whose command I had played for Almaz last year, is on Oleg Bratash’s coaching staff. Our team had just one practice before the tournament. It wasn’t enough for the rookies because Team Russia uses different tactics and everything else is just different. I had to learn quickly and adjust as soon as possible. 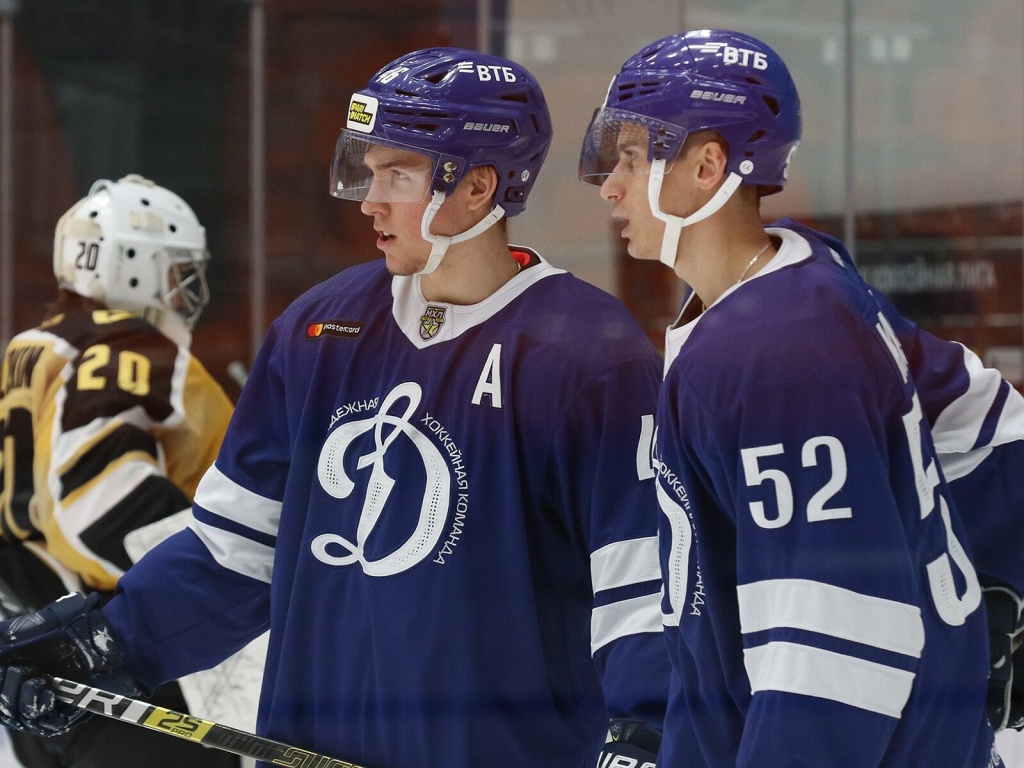 - You made your debut in the last game of the tournament against Kazakhstan’s second best team.
- It was great to finally hit the ice donning Team Russia jersey. The game against Kazakhstan was an exhibition but I still felt the importance of the moment so I was a little jittery in the first period. Nevertheless, I played the way I should in the second. It was a great experience, which is going to help me a lot moving forward.

- In the game you played on a line with your Dynamo teammate Alexander Kisakov. Your line is one of the most productive in Junior Hockey League. What did you lack on Team Russia to get a goal?
- Perhaps, we were missing the third member of our line – Maxim Makhrin (laughs). Sochi’s Vasily Glotov centered our line. He managed the whole line, told us where to skate and calmed us down. So it was comfortable playing with him. As for the goals, I did have our moments but just like in Junior Hockey League, I couldn’t capitalize on them. I have a decent number of points in the regular season but I could have had way more. So I work on improving my conversion rate. First of all, mentally.

- Team Russia has another Eurohockeytour coming up as well as IIHF World Championship. Do you think now about getting invited to at least one of the tournaments, especially in the light of several national team players getting injured?
- I will be ready for the call-up but I’m not going to get too far ahead of myself. I had received an invitation to the national team back in the fall. I was among invitees to Karjala Cup. I came to Novogorsk, got my equipment and went straight back to my team because I didn’t make the final cut. I was worried about it at first but then I calmed down and focused on Dynamo games. Right now my thoughts are focused on Dynamo as well. We’ll see how things will pan out with Team Russia, though!

- Do you feel more confident in Junior Hockey League games now that you’ve played for Team Russia?
- This is my second season in Junior Hockey League so I’m calm and confident. Team Russia gave me an emotional out. I was able to forget a little about the fierce race for the top place in league standings and get positive emotions from playing for Team Russia. So after this reboot I’m ready to battle for Dynamo with renewed energy. We have a tough end of the regular season ahead of the playoffs.

- How did your teammates greet you after returning from Team Russia?
- They joked about a little bit. They called me and Kisakov ‘national team men’ (smiles). But everyone was happy to see us. After all, as per tradition, we brought our teammates presents from Team Russia!