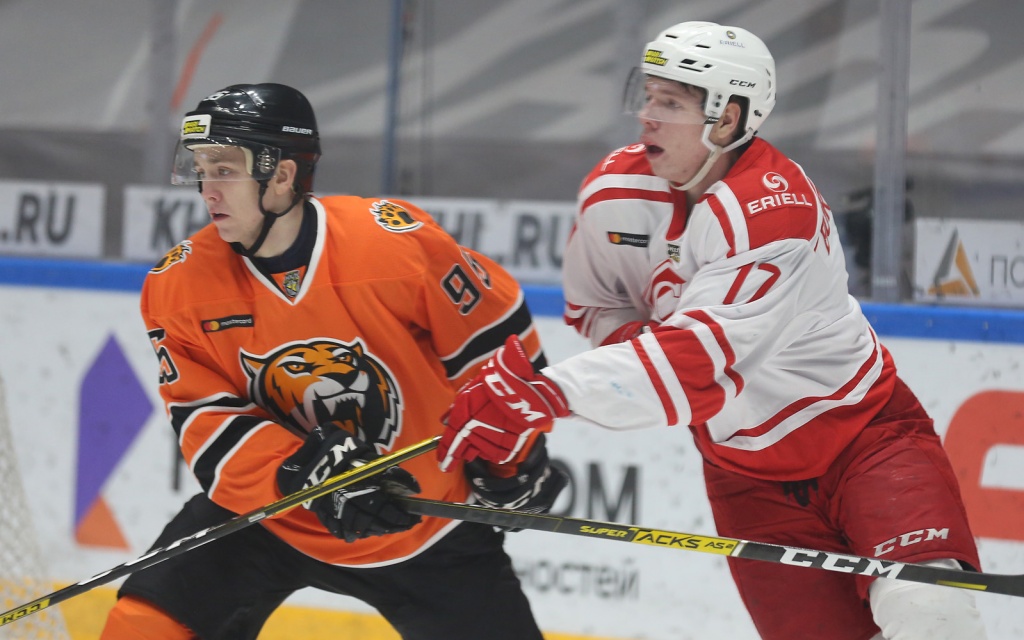 Amurskie Tigry, who currently occupy the last place in Western Conference standings, played hosts to JHC Spartak Moscow in Khabarovsk. The visitors came into the game tied for fourth place in the conference with Krasnaya Armiya Moscow. The ‘Tigers’ faced the red-and-white for the third consecutive time. They had won their second game in Moscow and got off to a good start at home as well – Amurskie Tigry capitalized on their initial power play opportunity of the game as Andrei Zheludkov found the back of the net. Spartak brought it back to even early in the second period of action as Vladislav Churkin hit the twine. However, the hosts went on to convert on yet another man-advantage and Zheludkov celebrated his second goal of the contest, putting ‘Tigers’ back in the lead. Nevertheless, not only Spartak managed to tie it up again before the intermission, they also got grabbed the advantage on the scoreboard – Matvei Kokovin and Ruslan Novruzov got the tallies.

The visitors felt confident in the third stanza, taking twice as many shots as the opposition and scoring three more goals. Dmitry Silantyev converted on a power play, Kirill Tagirov made it a 5-2 hockey game and late in regulation Silantyev scored his second of the game to seal the deal. Spartak enjoy a 6-2 win in a hard-fought game. 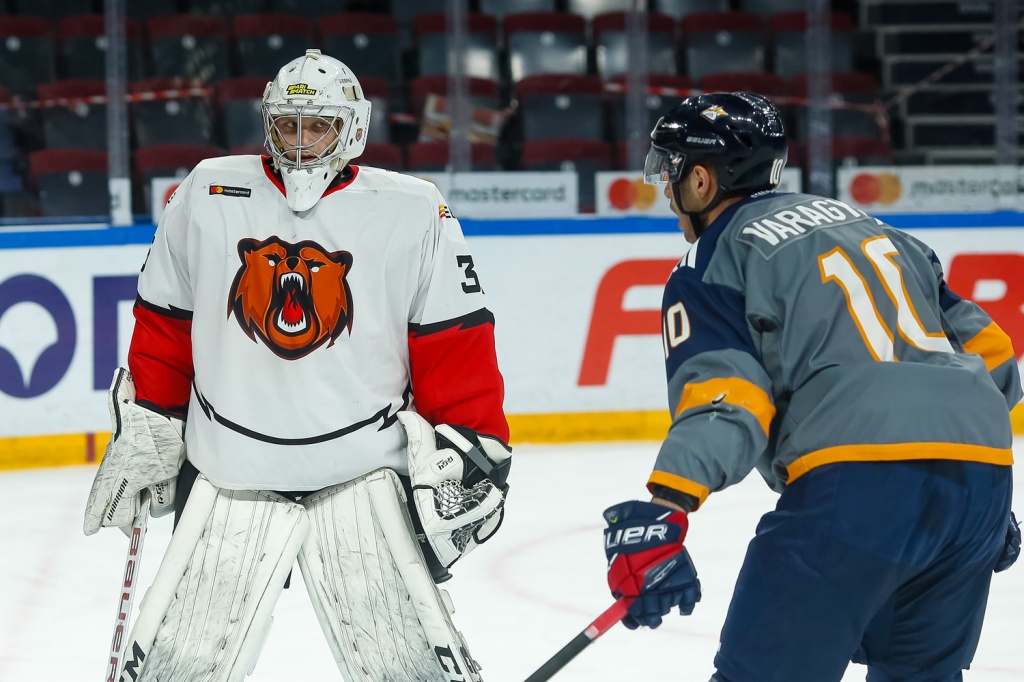 The only Eastern Conference game of the day was held in Magnitogorsk where Stalnye Lisy faced off against visiting Kuznetskie Medvedi. ‘Steel Foxes’ had risen back to the playoff zone the day before and looked to get some distance between them and Omskie Yastreby. Both goaltenders put on a show in the opening period, which is especially true for Novokuznetsk’s Kirill Kuznetsov, who stopped all 12 shots he had to face over the stretch. The ‘Bears’ clearly learned their lesson after having lost the first game of the back-to-back series but the only defensive mistake they made in the second period led to a goal. Novokuznetsk got with two many players in the offensive zone and left Valentin Zhugin unmarked. He received the puck from Roman Kantserov, skated in on a breakaway and beat him. Ruslan Gospodynko had a chance to improve the lead but Kuznetsov stopped him on a shorthanded counter-attack.

The hosts did score their second goal early in the third stanza. Zhugin got another tally as he squeezed to the slot and slipped the puck between Kuznetsov’s wickets. The visitors took two consecutive penalties after that but Magnitogorsk scored their third goal only in the last minute of regulation – Maxim Kuznetsov got one past his namesake. Stalnye Lisy win 3-0 on home ice and blank Novokuznetsk once again. Ilya Nabokov earned a shutout with 12 saves. 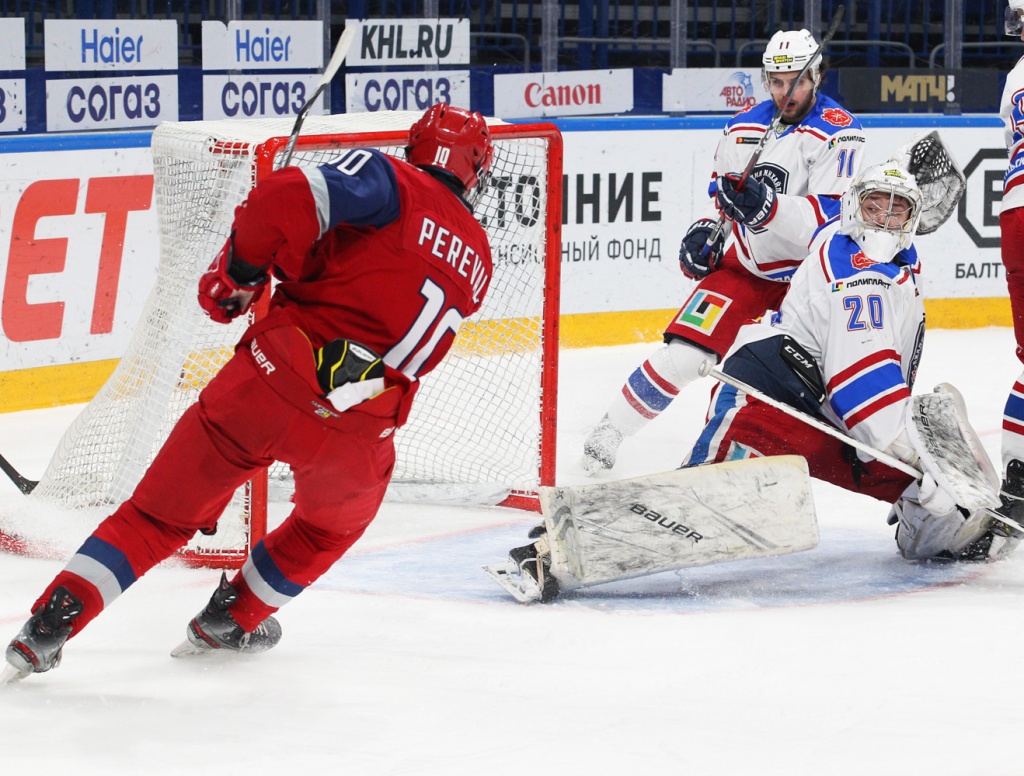 In the last game of the day Mikhailov Academy Tula continued to challenge Loko Yaroslavl after a blowout 9-1 loss the day before. Yaroslavl currently top the Western Conference and eye to keep a distance between them and JHC Dynamo Moscow, who had enjoyed two important wins over Krasnaya Armiya Moscow. First goal of the game came six minutes in – Ilya Mironov took a rifling shot from the blue line and hit the target. Alexander Daryin added a marker of his own to the lead – notably, it came shorthanded. The hosts turned Stepan Nikulin’s minor penalty in their favor. The forward got into a shooting position and sent it past Denis Popov. Ilya Chefanov tapped it home in the opening minute of the second frame and two minutes later Ilya Nikolayev converted on a delayed penalty call.

‘Railway men’ further improved their lead before the intermission. Alexander Perevalov buried the rebound on Ilya Nazarov’s shot and late in the frame Ruslan Abrosimov redirected Nikulin’s dish into the net from the slot. Yaroslavl continued to dominate in the final stanza. Daniil Tesanov one-timed it home to take Loko to a 7-0 lead, while Ruslan Abrosimov and Yegor Manin chipped in two more markers late in regulation to put a cherry on top. Sergei Murashov stopped 21 shots he had to face en route to a shutout win. Loko Yaroslavl defeat Mikhailov Academy Tula in two games by a combined score of 18-1.