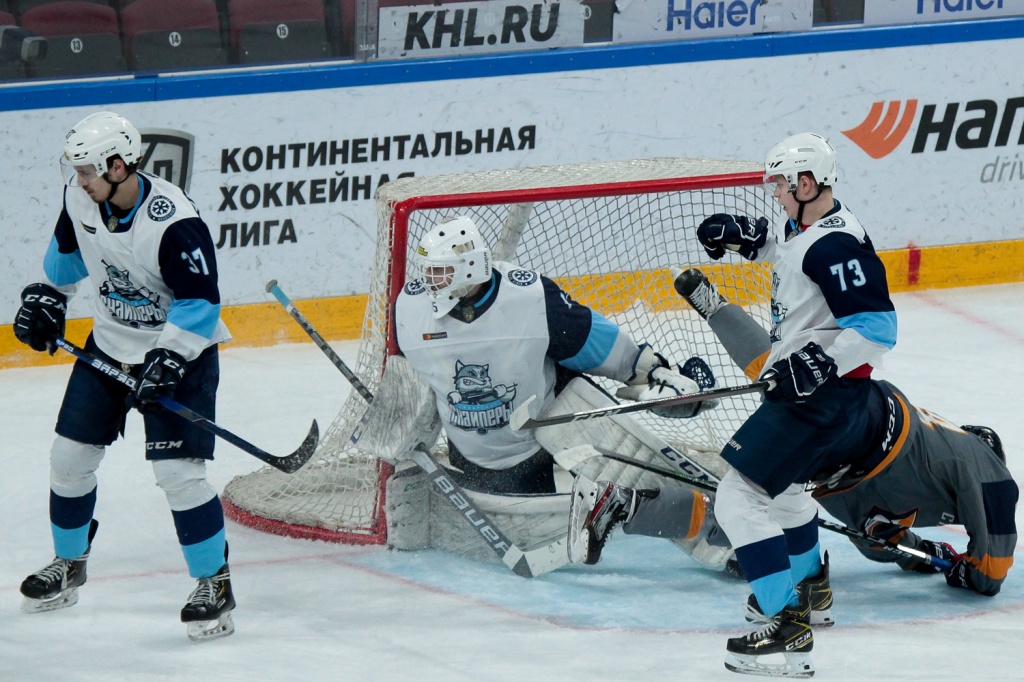 An important game took place in Magnitogorsk as Stalnye Lisy, who had occupied the eighth place in the Eastern Conference, faced off against Sibirskie Snaipery. The visitors had to get a win as they came into the game out of the playoff zone four points behind the ‘Steel Foxes’. Magnitogorsk took twice as many shots as the opposition in the opening period of play but it was the ‘Snipers’ who broke the ice. The goal came in the second frame – Sergei Dubakin finished off his individual effort with a snipe. Zakhar Zakharov brought the game back to even in no time as he capitalized on Nikita Tulinov’s defensive mistake. However, just over a minute later Ivan Klimovich was quick enough to bury the rebound on Makar Nikishanin, which took Sibirskie Snaipery to a 2-1 lead.

Eight minutes into the third stanza Novosibirsk improved their lead to two goals – Dmitry Gundyrev finished off Yegor Verkhorubov’s seemingly failed pass. Stlanye Lisy goaltender Ilya Nabokov couldn’t stop the one-timer. Magnitogorsk rushed down the ice looking for the equalizer and Valentin Zhukov found himself in the right place at the right time in a 4-on-4 situation to roof the puck and bring ‘Steel Foxes’ back to within one. Inspired by their success, the hosts picked up the pace and late in regulation Ilya Nikolayev sent the game to overtime with a long shot. Sibirskie Snaipery went on to win the extra point as Dubakin capitalized on his chances and notched his second tally of the contest. He beat two opponents and sent it upstairs on Nabokov. Sibirskie Snaipery win 4-3 on the road.

Omskie Yastreby win in Chelyabinsk, catch up to Stalnye Lisy 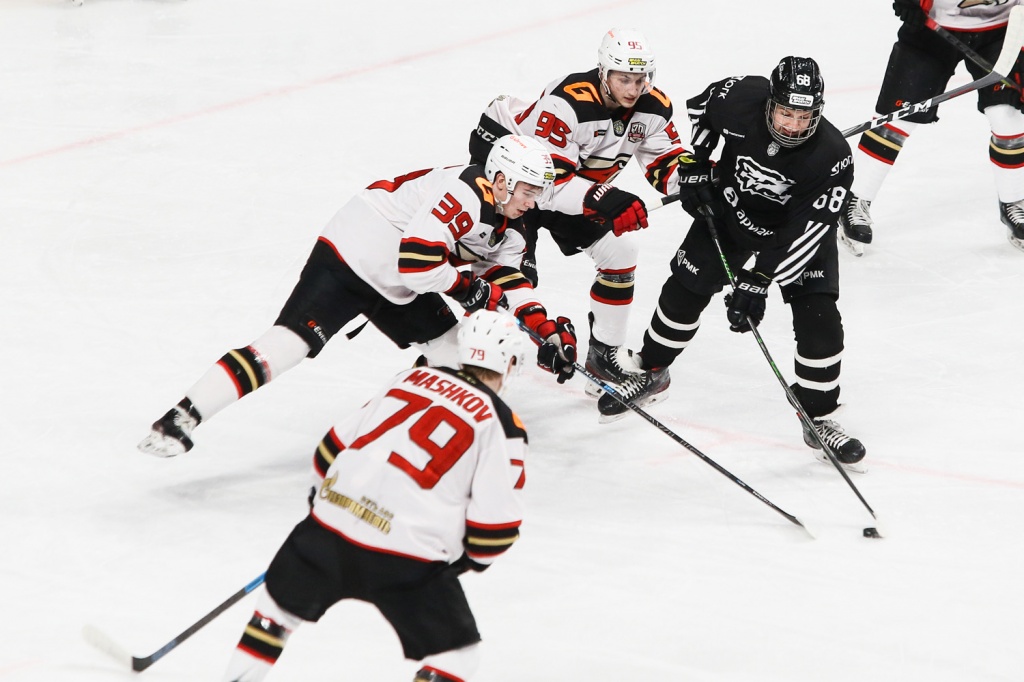 A very important game for Omskie Yastreby was held in Chelyabinsk. The ‘Hawks’ visited Belye Medvedi and eyed to tie Stalnye Lisy Magnitogrosk for eighth place in the Eastern Conference with a win. The visitors enjoyed a good first period of play, even though it was Chelyabinsk who opened up the scoring – Dmitry Sheshin scored on a quick transition play shorthanded. Eight minutes in Nikita Kholodilin brought the game back to even and late in the frame Omskie Yastreby improved their lead to three goals – Vladimir Mashkov and Ilya Reingardt got a tally each. Game officials had to take another look at Omsk’s third goal but it was confirmed after video review.

The teams exchanged goals in the second period of action. Early in the period Semyon Astashevsky beat Boris Solomatin, who couldn’t slide across in time. Solomatin had replaced Ilya Gorbunov in net as the latter didn’t look strong in the first frame. Kholodilin had a chance to get his second goal of the contest but the puck hit the post on his shot. Belye Medvedi got the next tally – Vadim Shaveko skillfully got his lumber on Sergei Drugal’s shot. The hosts didn’t get off to a good start in the third stanza – Gleb Trikozov made it a 5-2 hockey game. The visitors didn’t back down and brought the game back to a 1-goal differential – Sheshin got his second of the night, while Alexei Dolishnya scored ‘Polar Bears’ fourth goal. However, the fans didn’t get to see the game spill into overtime. Vladimir Mashkov sealed the deal with an empty-netter. Omskie Yastreby enjoy a huge 6-4 win on the road and catch up to Stalnye Lisy Magnitogorsk in Eastern Conference standings.

Gromovik posts shutout, Chayka climbs on top of the East 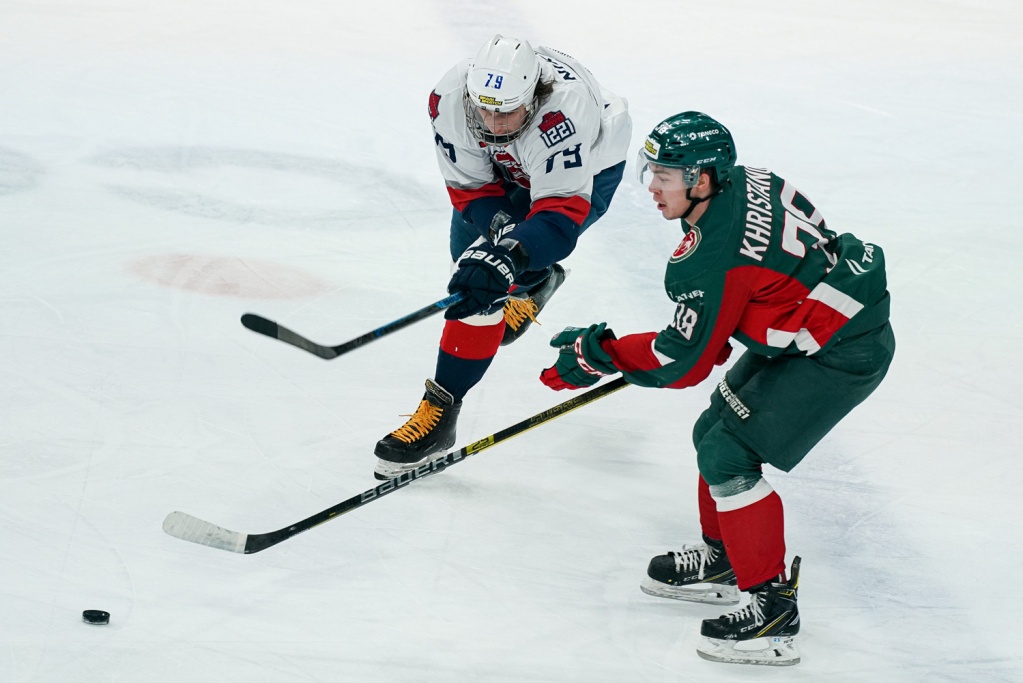 Just as the day before, second game of the back-to-back series between Eastern Conference top teams proved to be rather intense. The visitors scored first as they had done in the previous game. Ten minutes after puckdrop Andrei Nikonov solved Irbis Kazan goaltender Artur Akhtyamov, who had competed for Team Russia at the 2021 World Juniors in Edmonton, Alberta.

The goal remained the only one on the board for a long time. After conceding it, Irbis got the momentum on their side, took twice as many shots as the opposition in the second period of action and yet couldn’t get anything past Chayka Nizhny Novgorod goaltender Yegor Gromovik. The tension grew with every passing minute – brawls and fights were popping up all over the place over the stint and the teams combined for 14 penalty minutes by the time the horn went off for the second intermission.

Nizhny Novgorod did well early in the third stanza. Two minutes after the play resumed Denis Pochivalov doubled the lead for Chayka. The visitors managed to protect the lead. Despite the final push by Kazan, Yegor Gromovik was able to carry the donut to the finish line, stopping all 34 shots he had to face en route to his ninth shutout of the season, which is good enough for second best in Junior Hockey League. With this 2-0 win on the road Chayka Nizhny Novgorod edge Irbis Kazan for the first spot in the Eastern Conference standings. Moreover, Nizhny Novgorod have all but guaranteed to secure the post-season. To clinch a berth in the Kharlamov Cup Playoffs Chayka have to gain just a single point (or wait for Omskie Yastreby to lose a game). 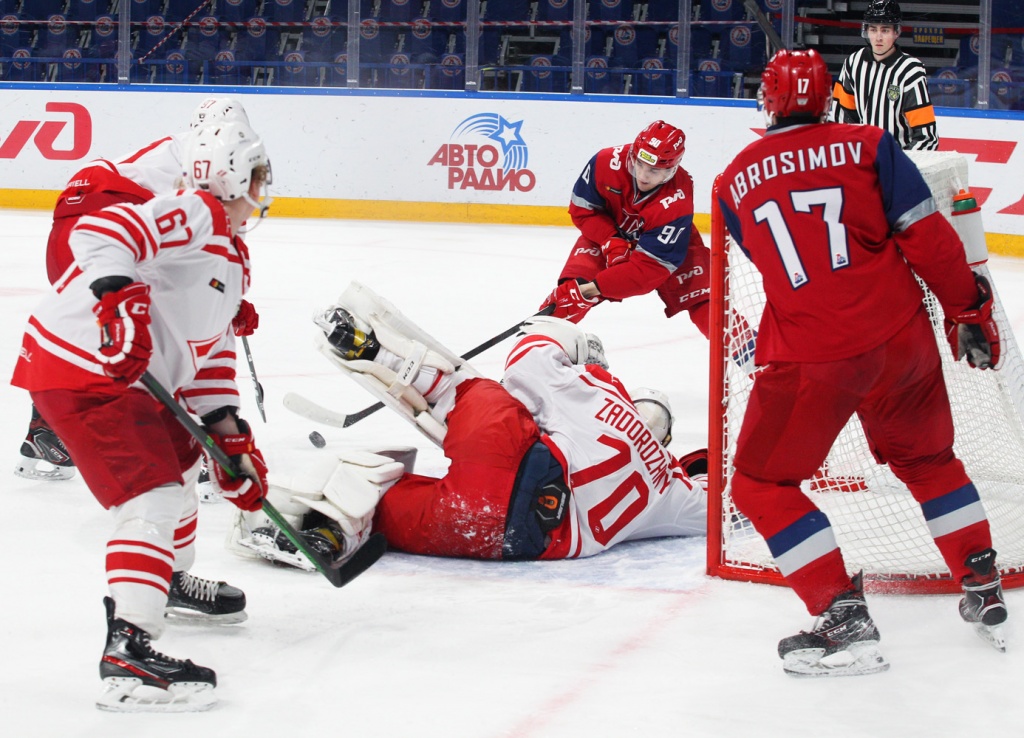 After returning from a road trip to Russia’s Far East, Loko Yaroslavl began a long homestand. JHC Spartak Moscow, who currently find themselves in the middle of the Top-8 pack of the Western Conference, were the first team to face the ‘railway men’ at Arena-2000.

A number of core players have returned to Loko. Maxim Beryozkin, Alexander Daryin, Yegor Manin and Maxim Denzhkin were sent down to the team after gaining KHL and VHL experience. Despite the heavy reinforcements, it was a rookie who got on the board first – 16-year-old Kirill Kudryavtsev slipped the puck between the wickets of Platon Zadorozhny for his second career Junior Hockey League goal. Spartak went on to capitalize on a power play opportunity with just a minute remaining to play in the opening period of action. However, with 36 seconds on the clock Ilya Chefanov put the hosts back in the lead.

The visitors were demoralized by letting in the late goal. Vladimir Tyurikov’s men didn’t look great early in the second frame either. Alexander Daryin gave Yaroslavl a 3-1 lead just over a minute into the period. A few moments later Kirill Tagirov brought the visitors back to within one but the ‘railway men’ went on to score two more goals before the second intermission. First Pavel Tyutnev converted on a 2-on-0 rush and then Daniil Tesanov scored with a wrist-shot.

Early in the third stanza Tagirov scored his second goal of the contest and set his new career Junior Hockey League high in regular season tallies as it was the 14th marker of the year for the forward. The goal restored the intrigue in the game but it was short-lived. Midway through the period Ilya Chefanov scored his second of the night as well beating Zadorozhny from a negative angle and thus setting the final score. Loko Yaroslavl enjoy a solid 6-3 victory on home ice. With this success the ‘railway men’ extended their winning streak and solidified their position on top of the Western Conference table.

SKA-1946 beat Krylia Sovetov to get their revenge, send JHC Dynamo Moscow to the playoffs 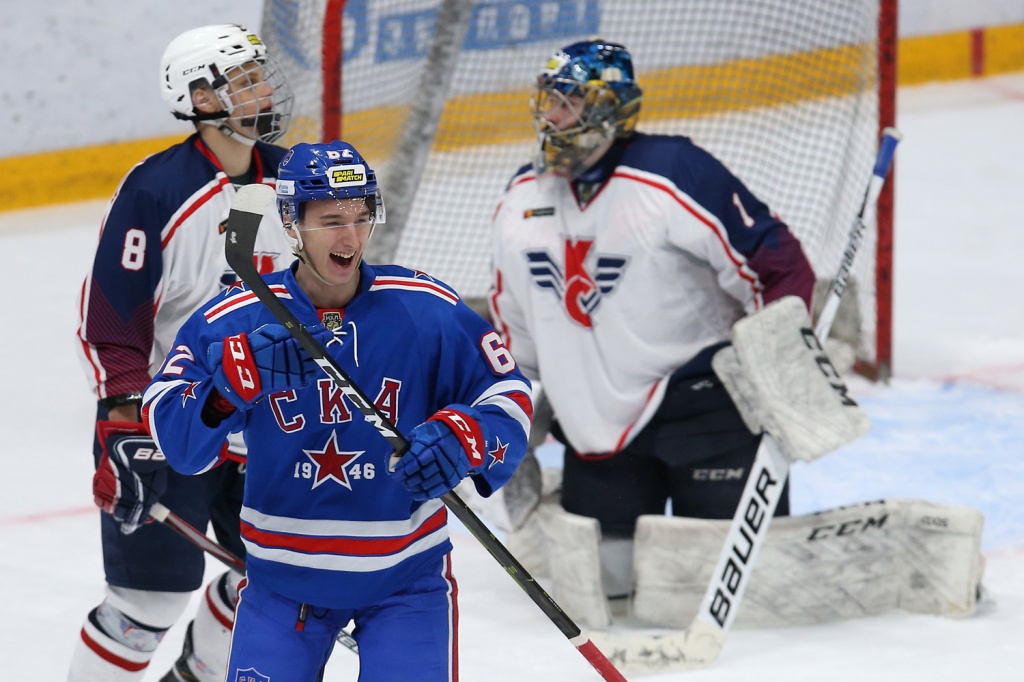 SKA-1946 St. Petersburg faced off against Krylia Sovetov Moscow in the second game of the back-to-back series at SC Hockeytown. Setun team still has a chance to make the post-season this year as they had enjoyed a win in the shootout the day before. This time around ‘army men’ came out of the gate much more aggressively and opened up the scoring just over a minute into the bout – Nikita Dishkovsky finished off Matvei Michkov’s pass with a shot from the slot. Video review confirmed that the puck crossed the line. Nikita Shuidin, who had missed a month of action due to an injury, doubled the lead seven minutes later with a screen-shot – it was his first goal since coming back. Second period of play proved to be much more high-scoring. After Ilya Ivantsov made it a 3-0 hockey game, Krylia Sovetov finally solved goaltender Valery Brinkman – Ivan Klimkin found the back of the net.

Midway through the frame Alexander Mirgorod got a 2-minute minor for boarding and Alexander Gordin was able to jam home the rebound on the ensuing power play opportunity. A few minutes later a brawl between Yegor Bugayev and Andrei Proskurnin led to a game-misconduct for the latter as he head-butted his opponent. SKA-1946 got a long man-advantage out of it and Valentin Shepelev went on to chip in another goal. Moscow brought the game back to even before the second intermission – Ildar Kashafetdinov scored on the rebound, while Matvei Petrov got a point for the original shot. ‘Soviet Wings’ opened shop in Brinkman’s territory but Nikita Dishkovsky scored his second of the game on a counter-attack to make it 5-3. Notably, the goal came shorthanded. To the visitors’ credit, they didn’t give up. Vladimir Koryagin converted on yet another power play attempt but Moscow were unable to get anything out of their final push. As a result, SKA-1946 St. Petersburg win 5-4 on home ice, incidentally securing a playoff spot for JHC Dynamo Moscow.

Russkie Vityazi concede a goal in the final minute of regulation, yet beat JHC Dynamo St. Petersburg in the shootout 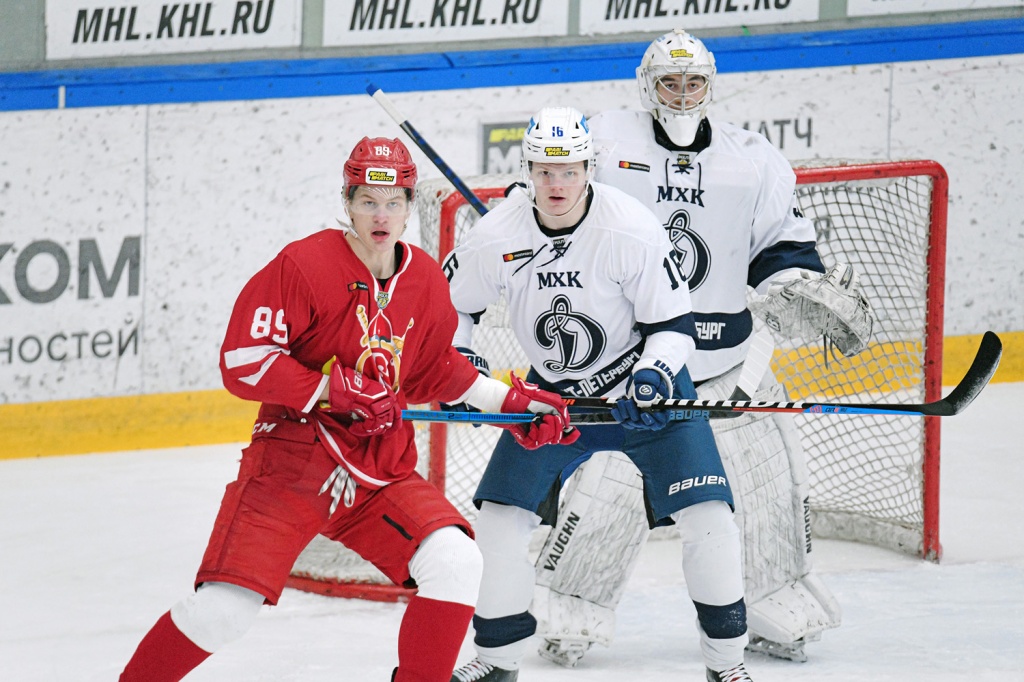 Russkie Vityazi looked to see their losing streak end in the second game of the back-to-back series against JHC Dynamo St. Petersburg, which took place in Chekhov, Moscow Region. After the loss the day before, Moscow Region team found itself six points away from the playoff zone and having no room for mistake. The hosts got off to a decent start – six minutes into the opening period of play Dmitry Zaitsev whistled one past Dynamo goaltender Ivan Sapozhnikov but Dynamo went on to capitalize on the game’s initial power play opportunity – Maxim Petrov found the back of the net. Russkie Vityazi had the momentum on their side in the second period of action but managed to get in front only late in the third stanza. Filat Zotov converted on Artyom Levinsky’s minor penalty.

St. Petersburg rushed down the ice looking for the equalizer, peppered Russkie Vityazi netminder Daniil Chechelev with shots from all over the place and finally got one past him in the final minute of regulation – Vitaly Budnitsky sent the game to overtime. Two minutes into the extra period of play Nikolai Smirnov had a chance to win it for the hosts but he fanned on a shot in front of the gaping net. The bout went all the way to the shootout and Russkie Vityazi forward Kirill Kondyrev was the only one on both teams who managed to convert on his attempt, sealing the win for the hosts. Russkie Vityazi enjoy a victory on home ice and now find themselves just four points away from the playoff zone.