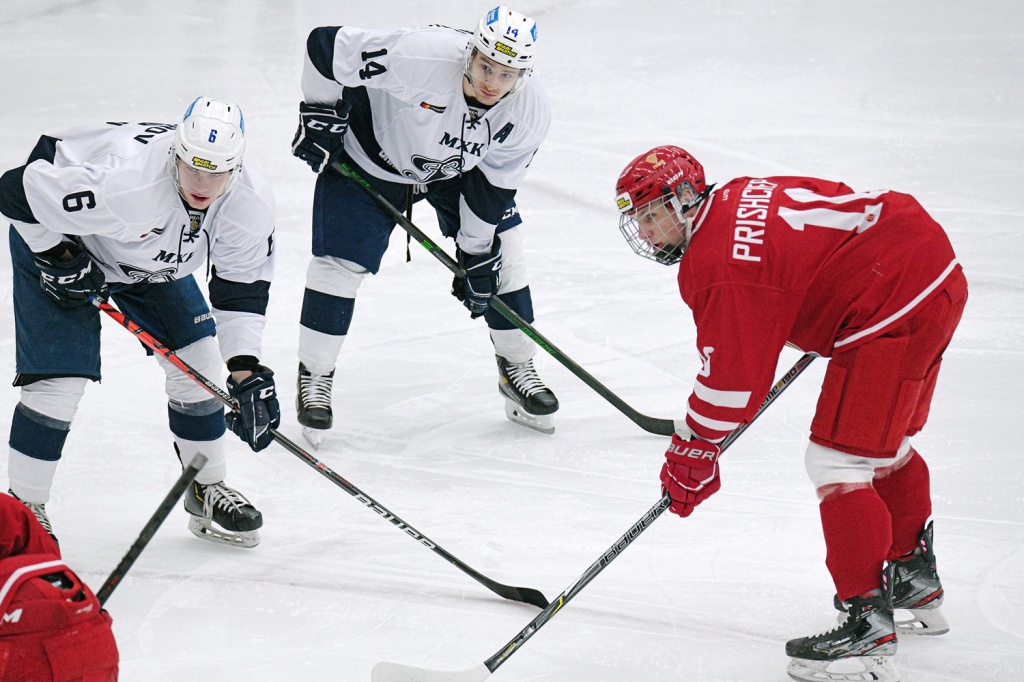 First game of the day was held in Chekhov, Moscow Region as Russkie Vityazi looked to snap their losing streak facing off against JHC Dynamo St. Petersburg. Several unnecessary losses slung Moscow Region out of the Top-8 in the Western Conference and gaining points became of an essence. Dynamo, on the other hand, were looking to solidify their position in the playoff zone and thus eyed to avoid losing. Chekhov opened up the scoring two minutes into the opening period of play – Georgy Savin found the back of the net. The visitors grabbed the momentum in the second frame and solved goaltender Savely Sherstnyov midway through it – Pyotr Yakovlev, who leads St. Petersburg in points, hit the twine.

Dynamo got off to a strong start in the third stanza and Nikita Buruyanov went on to capitalize on a power play opportunity, which had spilled over from the previous period. St. Petersburg killed off a penalty after that and Ignat Kokhanin improved the lead to two goals. Only after Sergei Bolshakov scored Dynamo’s fourth goal of the night did Moscow Region convert on a power play – Nikolai Smirnov was credited with the tally. However, Russkie Vityazi couldn’t find the equalizer in the remaining five minutes of regulation. Dynamo had the last word in this one as well as Yuri Ushakov scored his team’s fifth goal. St. Petersburg enjoy a huge 5-2 win on the road. If SKA-1946 St. Petersburg were to beat Krylia Sovetov Moscow, Dynamo would also benefit from it.

Chayka top Irbis, Kazan remains on top of the conference

In the biggest matchup of the day two Eastern Conference top teams went up against each other. Chayka Nizhny Novgorod have recently got really close to Irbis Kazan in the standings – just two points separated the teams before the game and Nizhny Novgorod looked to tie Kazan for first place in the East with a win in regulation. The hosts came out hot for the opening period of action in Kazan but literally the first shot on net they conceded turned into a goal. Gleb Petrov deftly battled for the puck in the offensive zone, stole it, skated to open ice and fired it past goaltender Artur Akhtyamov. The visitors had a chance to improve their lead right after that but they let Kazan kill off two consecutive penalties. Irbis outshot the opposition in the second period of play but Nizhny Novgorod netminder Yegor Gromovik was on top of his game. Akhtyamov wasn’t fazed by the goal he allowed either and made no mistake in the second period.

Kazan managed to even it up only midway through the third stanza. The goal was rather similar to the one they had conceded, although this time around it was Ruslan Galimzyanov who won the battle for the puck against the boards and Maxim Bykov finished the job. The visitors capitalized on a power play opportunity late in regulation as Denis Pochivalov found the back of the net but Kazan got the equalizer on their final push – Kirill Mukhin brought it all back to even with just 24 seconds remaining on the clock. Kazan’s Savely Kuvardin got the gate in overtime and Nizhny Novgorod didn’t let the chance go to waste. Gleb Petrov scored the game-winning goal. Chayka Nizhny Novgorod win on the road but Irbis Kazan still reign the Eastern Conference as they got a point in regulation.

Michkov ties the game in the last minute, SKA-1946 still lose to Krylia Sovetov in the shootout 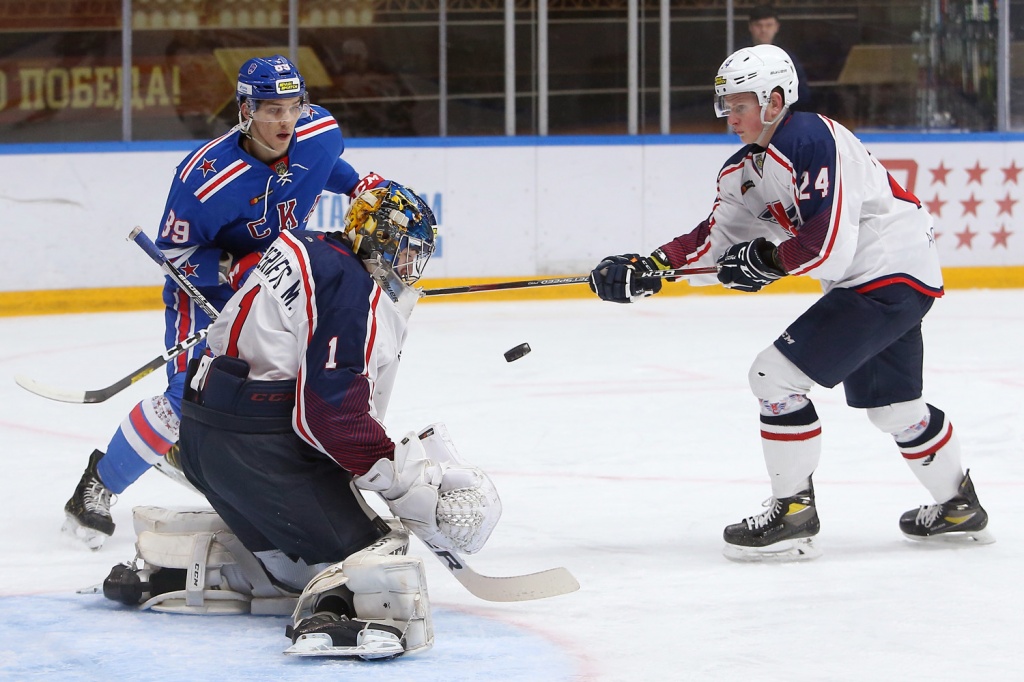 SKA-1946 St. Petersburg played hosts to Krylia Sovetov Moscow at SC Hockeytown. Setun team went into the game nine points away from the cut-off line for the playoffs. Every game is a must-win for them from now on but it’s easier said than done when facing such a mighty foe as SKA-1946. As expected, the hosts grabbed the momentum right away and were spending a lot of time in Maxim Kloberdanets’ territory. However, St. Petersburg netminder Pavel Romashkin wasn’t idle either and had to come up big right before the first intermission – Roman Shefer took a shot, the puck ricocheted off Yuri Gornushechkin but SKA-1946 goaltender was up for the task. Krylia Sovetov evened it up on the shot-clock in the second period of action and when Yegor Gurzanov got a minor penalty Romashkin had to bail out his team once again. SKA-1946 responded with several consecutive long possession plays but it was Vitaly Lebyodkin’s chance that stood out the most – he was tried to bury his own rebound off a redirect but couldn’t tap it into the open side of the net.

The teams continued to battle hard in the third stanza and trade scoring chances. Key moments of the game transpired late in regulation. Ivan Klimkin took a shot from the left wing off a solo dash, Romashkin had a piece of it but the puck still trickled across the line. St. Petersburg set shop in the offensive zone, buzzed around Kloberdanets’ net and with 30 seconds remaining to play in regulation Matvei Michkov brought it back to even – the puck hit the post on his shot and deflected into the back of the net of Kloberdanets’ back. The youngster set a new Junior Hockey League record with the marker as he edged Nikita Kucherov for most goals among players under 17. As for the fate of the game, after several huge save by both netminders in the extra period, it went to the shootout and Krylia Sovetov won the extra points, converting on two of their attempts.