Tolpar bounce back and beat Sputnik 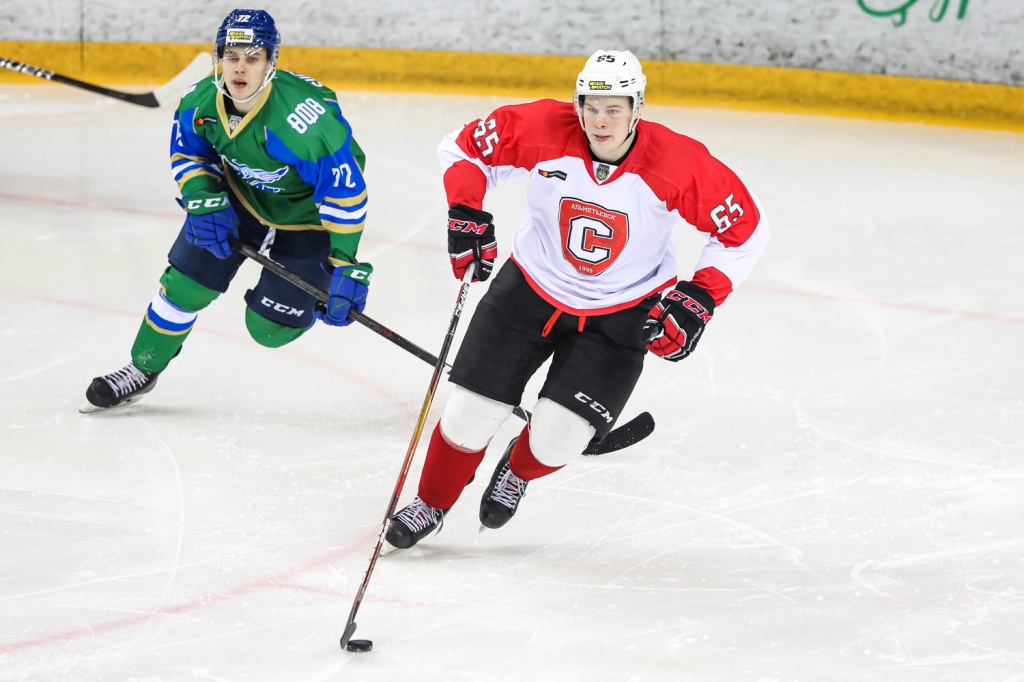 Sputnik Almetyevsk faced Tolpar Ufa on the road in the second game of the back-to-back series. The day before Almetyevsk won in the shootout, which allowed them to climb to the fourth spot in the East and extend the gap between them and Tolpar to four points. However, Eduard Dmitriev’s men were unable to build on the success. The hosts were spending more time in the offensive zone in the early moments of the game and managed to break the ice just eight minutes in as Mark Andreyev found the back of the net. Sputnik responded with a goal in a 4-on-4 situation. Andrei Sholgin and Sergei Safin-Tregubov got a minor each in short span of time and Timofey Okruzhkov scored the equalizer shortly before the intermission. Midway through the game Tolpar had to kill off another penalty and they went on to get their second lead of the game – Danil Aimurzin found the back of the net. Notably, he was the one who was got the gate two minutes earlier for tripping.

The hosts did well early in the third period as well – Sergei Shapovalenko increased the lead to two goals. After that Tolpar focused on protecting their advantage on the scoreboard and Almetyevsk managed to eke out just one marker in the last second of regulation on their last salvo. The goal was subsequently disallowed due to goaltender interference on the play. However, had it been otherwise, the visitors would have had just one second to try to force overtime. Tolpar Ufa bounce back with a 3-1 win on home ice and catch up to Mamonty Yugry Khanty-Mansiysk in points. The two teams are now tied for sixth place in the Eastern Conference standings. 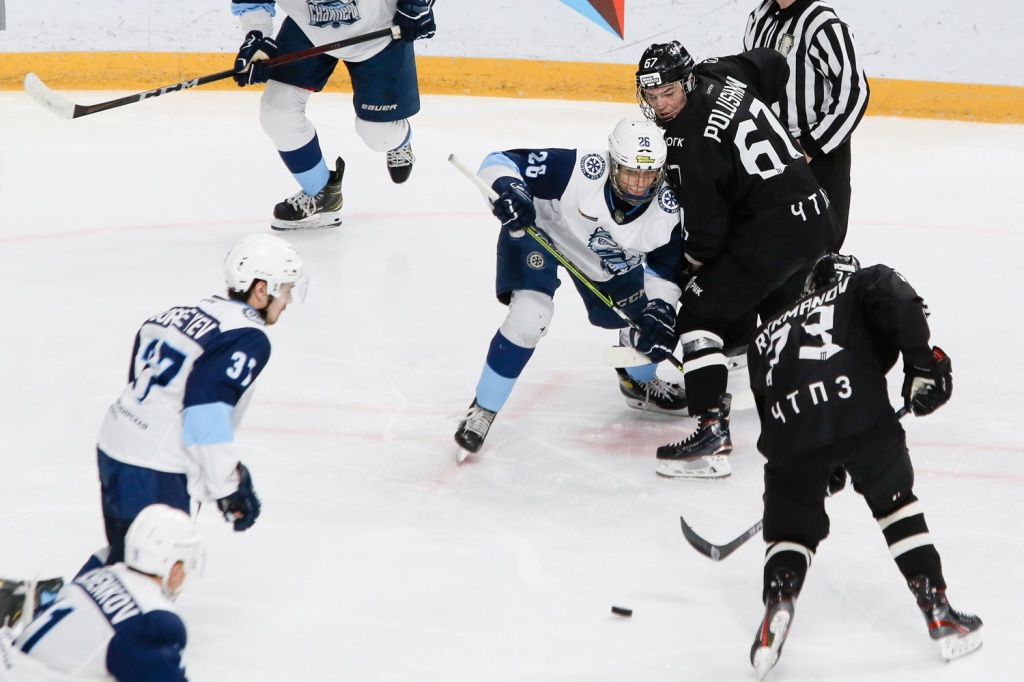 Belye Medvedi Chelyabinsk, who currently occupy the third place in the Eastern Conference, played hosts to Sibirskie Snaipery – a team that is gasping for points. The ‘Snipers’ battle for the post-season and came into the game six points below the cut-off line. As for Chelyabinsk, they are just a few wins away from climbing on top of the conference. The visitors managed to get on the board in the opening minute of the play. Moreover, they converted on their initial rush – Sergei Dubakin sniped a nice wrister from a sharp angle – the puck went in just under the bar. Chelyabinsk rushed down the ice looking for the equalizer. They had their fair share of good scoring chances and also a long power play on Alexei Varennik’s major penalty. Belye Medvedi began the second period by taking several penalties but Novosibirsk couldn’t stay out of the box either – Sergei Odinokov got another major.

Late in the period the visitors improved their lead with a power play goal – Yegor Vekhorubov threw one past Ilya Gorbunov. The forward skillfully tipped a shot in front of the net. The period ended with another string of penalties. Belye Medvedi set up shop in the offensive zone early in the third stanza and forced the opposition to take another penalty but goaltender Nikita Tulinov was in no mood to let anything past him. He bailed out his team a number of times over the course of the game en route to getting a 28-save shutout win. Sibirskie Snaipery enjoy a huge victory on the road. They will now head out to a vital back-to-back series against Stalnye Lisy in Magnitogorsk. 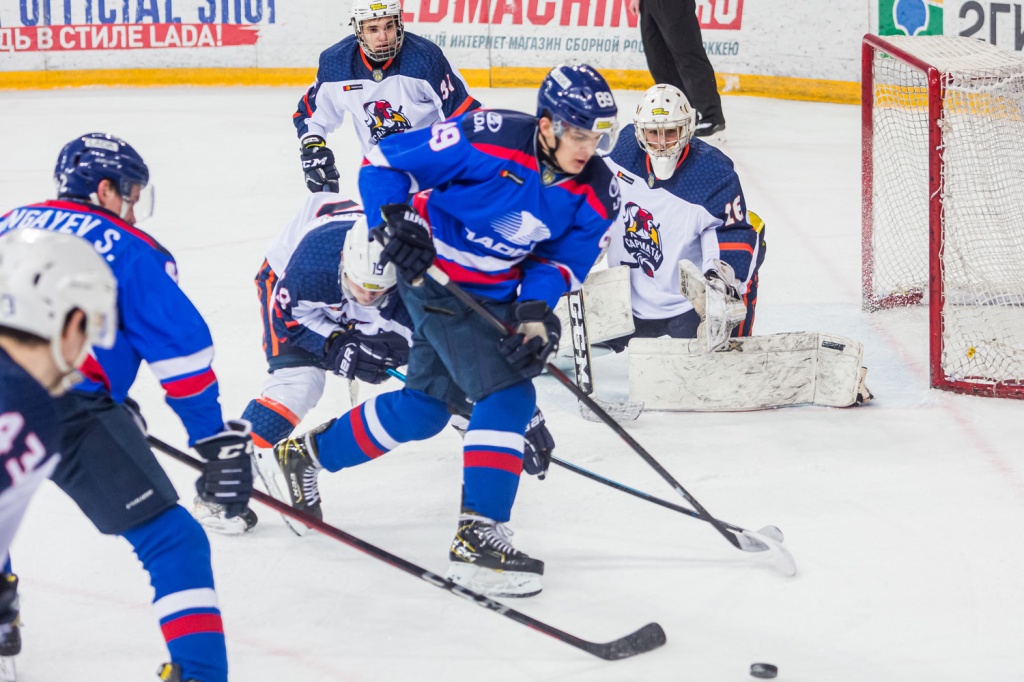 Ladiya Togliatti faced off against Sarmaty Orenburg on home ice in the second game of the back-to-back series. The hosts had to gain points in the bout to keep their fading playoff hopes alive. Togliatti came into the game eight points below the cut-off line for the post-season. Ladiya got on the board just seven minutes in – Artyom Yakutov received the puck off a won face-off and took a quick snap-shot, catching goaltender Denis Vyalushkin off guard. Six minutes into the second period of action Sarmaty’s Kirill Bayev got the gate and Togliatti managed to double their lead on the ensuing power play opportunity. Yakutov scored his second of the game off defenseman Yegor Savikov’s assists. The latter leads Togliatti in points.

The hosts dominated early in the third stanza and they doubled their advantage on the scoreboard. Andrei Malinov was able to bury the rebound, while Igor Khlopotkin sniped an excellent shot just under the bar. The only downside for Togliatti was the fact that Daniil Zakharov couldn’t carry the donut to the finish line. Sarmaty managed to get a consolation goal past him as Orenburg top player Nikolai Gnezdilov hit the twine. Ladiya enjoy a 4-1 win on home ice and they continue to battle for the playoffs along with Sibirskie Snaipery.