Omskie Yastreby beat Stalnye Lisy and get their revenge 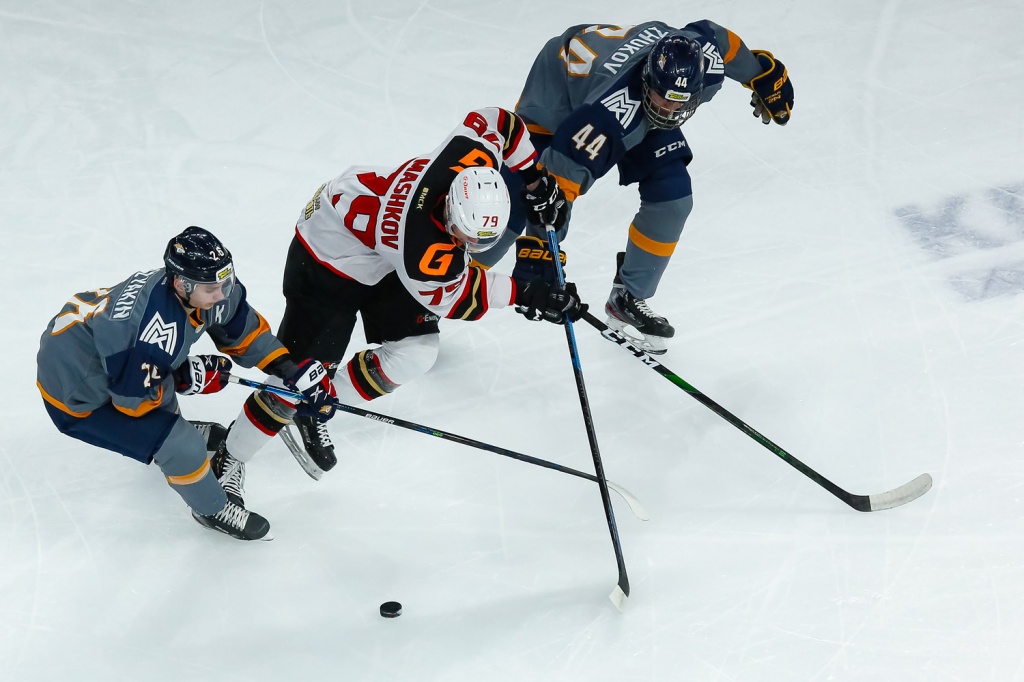 Stalnye Lisy Magnitogorsk played hosts to Omskie Yastreby in the second game of the back-to-back series. After a loss the day before, the visitors were three points behind the hosts. The ‘Hawks’ couldn’t afford widening the gap between them and their direct competition, while the ‘Steel Foxes’ were looking to increase the distance from Sibirskie Snaipery and Laidya Togliatti. Magnitogorsk began the game with several offensive rushes and six minutes in Yegor Martynov got a minor penalty for interference. It took Omskie Yastreby just 12 seconds to release him from the box – defenseman Timofey Davydov opened up the scoring. The visitors took a few more shots on goaltender Ilya Nabokov and continued to have the momentum on their side in the second period of action.

Late in the frame Omskie Yastreby took a penalty and Azat Kutayakov failed to capitalize on a great scoring opportunity. He took a powerful clapper from the face-off circle and the puck rattled off the post. Yegor Moshkin had another great chance as he got in on a breakaway beating his defenseman – he tried to bury his own rebound but the puck skipped wide off the net. Soon after that Omskie Yastreby took two consecutive penalties but netminder Andrei Mishurov and his defenseman were able to keep the opposition at bay. Final push yielded no results and Davydov’s goal proved to be the sole in the bout. Mishurov stopped 23 shots en route to a shutout win and with these two points Omskie Yastreby are just a stone’s throw away from Magnitogorsk in Eastern Conference standings. 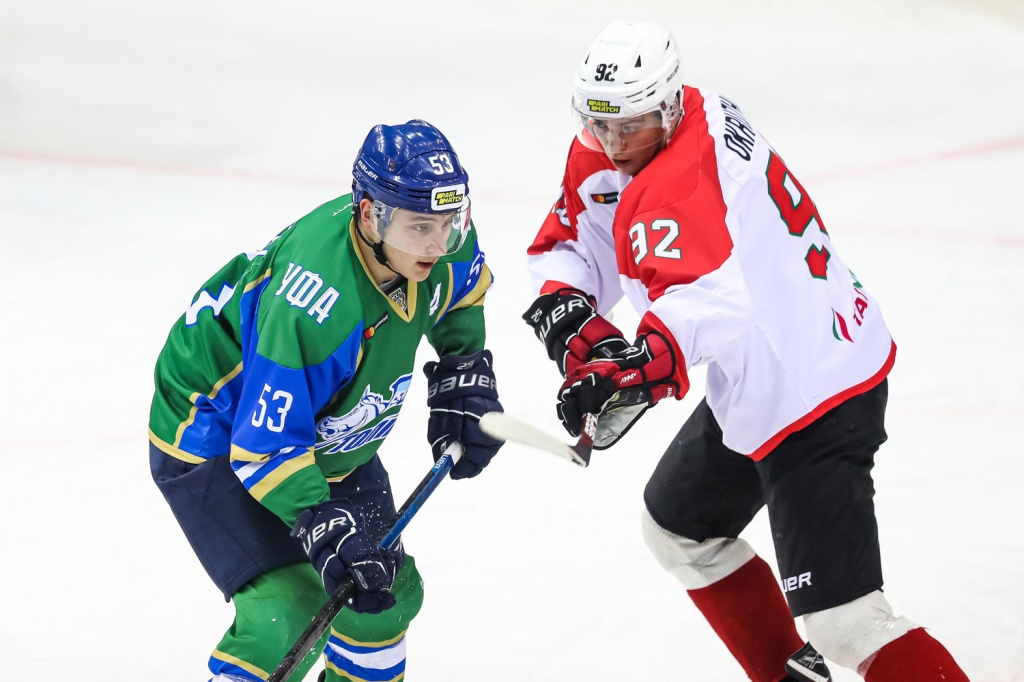 An important game was taking place in Ufa as the fifth and seventh teams of the Eastern Conference went up against each other – Sputnik Almetyevsk and Tolpar Ufa respectively. Just three points separated the two teams before the bout. Notably, Almetyevsk are just a couple of wins away from cracking the Top-3. The hosts converted on Sputnik’s initial penalty of the game – Danil Alalykin solved Makar Kositskikh off a set-up by Andrei Kuznetsov. The visitors responded in the opening minute of the second period of action – Rail Kabirov found the back of the net. The teams traded goals right before the second intermission. Danil Aimurzin put Tolpar back in the lead with a tally on a power play but Islam Garaishin restored the parity on the scoreboard just two minutes later.

Tolpar got their third lead of the game five minutes into the third stanza as one of their top players, Alexander Pashin, hit the target. However, the score remained 3-2 just for over a minute. Vyacheslav Kolesnikov brought it back for the visitors. The game spilled into overtime but it solved nothing. Almetyevsk went on to win in the shootout as Timur Zakirov was the only one on both teams who converted on his attempt.

Atlant enjoy a win over Krasnaya Armiya in Moscow 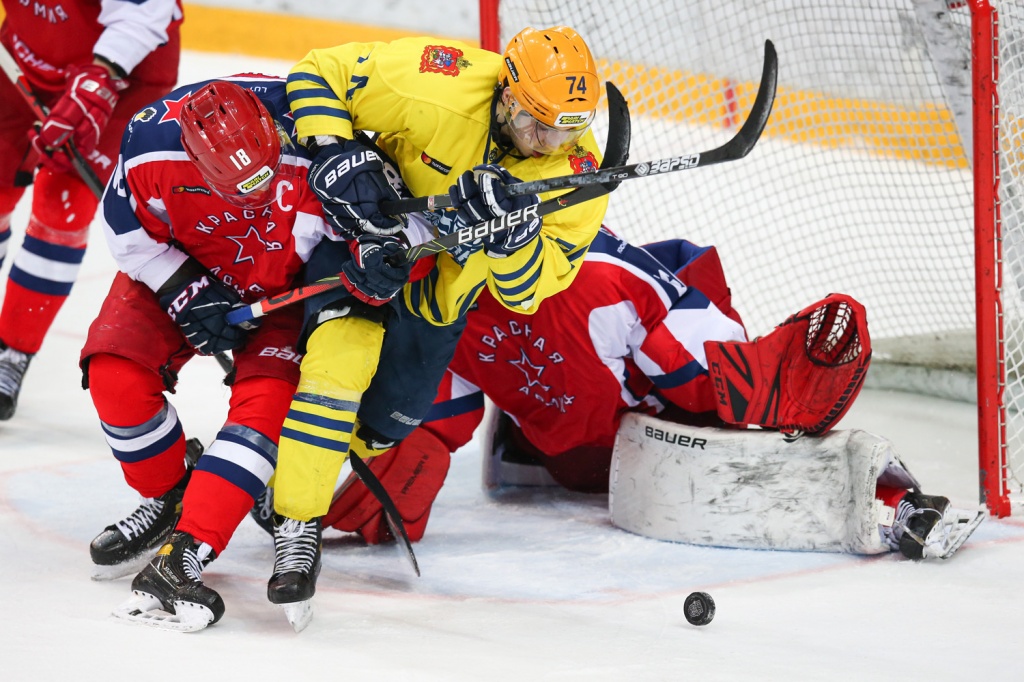 The only game taking place in the Western Conference was a bout between Krasnaya Armiya Moscow and JHC Atlant Moscow Region. ‘Army men’ sat fourth in the table coming into the game and eyed to continue their pursuit of SKA-1946 St. Petersburg. As for Moscow Region, they enjoyed great success last week and climbed back to the playoff zone. Their goal was to solidify their position among the Top-8 teams of the conference. The visitors opened up the scoring just over a minute in as Aidar Valeyev hit the target. However, Mytischi ran into a penalty problem after that and Moscow went on to capitalize on their second power play opportunity of the game – Matvei Averochkin finished off a nice passing play. The visitors picked up the pace in the second period of action and scored in the early minutes to get back on top. Officials had to review the play but Mikhail Kalashnikov’s marker was confirmed in the end.

Atlant went on to score two more goals past Matvei Kiselyov before the period expired. Grigory Seleznyov netted one at even strength, while Artyom Kanayev converted on a power play opportunity. Mytischi were very focused in the last stanza and played smart defensively, allowing Krasnaya Armiya to get just one goal bac – Matvei Guskov hit the twine. Neither Alexei Zhukov’s penalty, nor Mikhail Kalashnikov’s ejection couldn’t stop Moscow Region from protecting their lead. With these two points Atlant surpass JHC Dynamo St. Petersburg and climb to the seventh spot in the Western Conference, increasing the gap between them and Russkie Vityazi for seven points already.