February 2nd was a busy day in Parimatch Junior Hockey League regular season with 12 games on the agenda spread across both conferences, a lot of which were vital for standings allocation. On top of that, one of the teams became first to clinch a playoff berth. 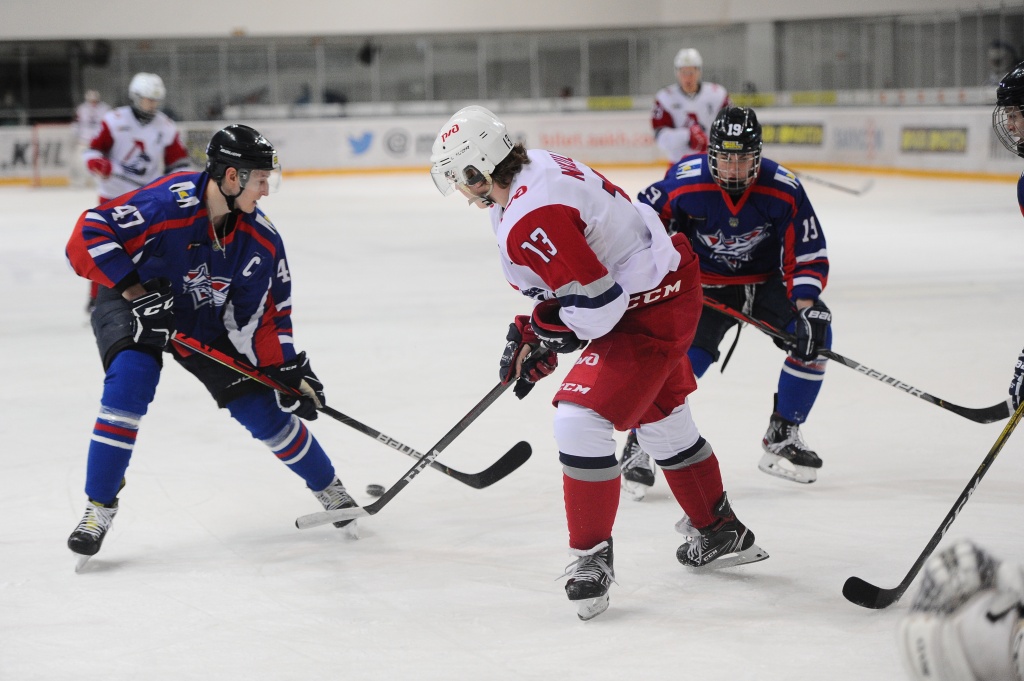 First game of the day was held in Yuzhno-Sakhalinsk as Loko Yaroslavl visited Sakhalinskie Akuly. The visitors were eyeing to clinch the first playoff berth with a win. The day before ‘railway men’ enjoyed a blowout win but in the second game of the back-to-back series Sakhalinskie Akuly gave the opposition a run for their money. There was no scoring in the opening period of play but ‘Sharks’ netminder Kirill Kuzmenko, as expected, had a lot more work on his plate than his counterpart Yegor Gorshkov as he went on to stop 17 shots over the stretch. The hosts broke the ice seven minutes into the second stanza on a counter-attack – Georgy Marchenko found the back of the net. Yaroslavl responded with a successful power play attempt – their first special unit got the job done as Ruslan Abrosimov hit the twine.

‘Railway men’ grabbed the lead early in the third period as Maxim Beryozkin bubbled the net. Stepan Nikulin, who had been named the top forward of January in the Western Conference and has led Junior Hockey League in scoring over the past two weeks, set the final score. Loko Yaroslavl, the most decorated team of the league, take it 3-1, extend their winning streak to seven games and become the first team this season to clinch a berth in Kharlamov Cup Playoffs. 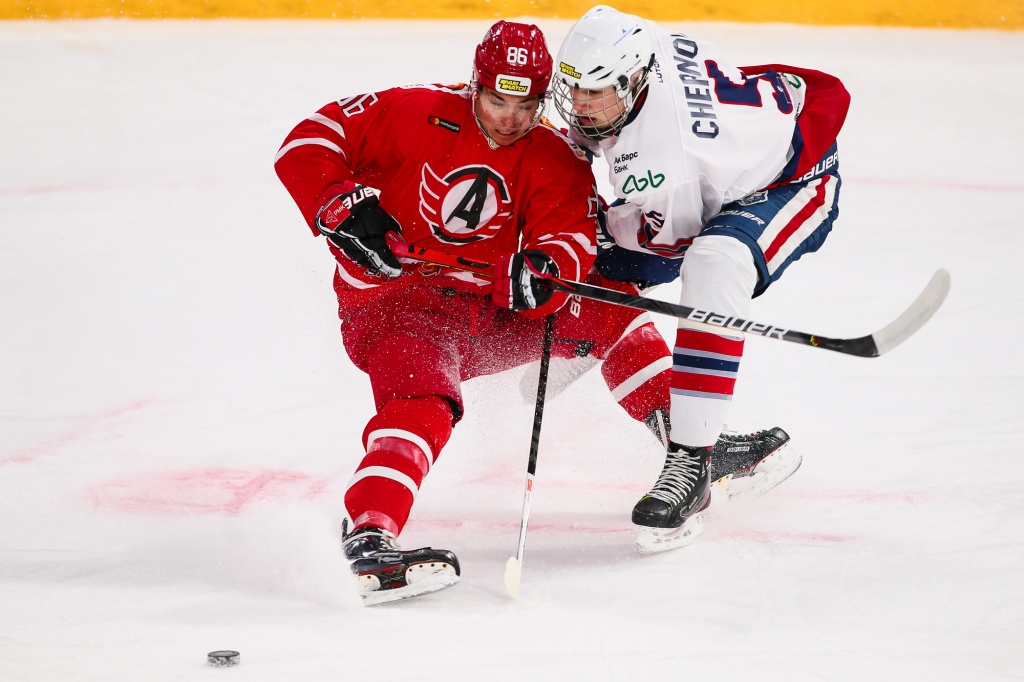 Avto played hosts to Reaktor Nizhnekamsk in Yekaterinburg. The visitors came into the game with almost not a shred of hope of making the post-season this year. Yekaterinburg also needed points as they were locked with Sputnik Almetyevsk at fourth place in the Eastern Conference but just a win away from soaring to Top-3. The hosts went on to enjoy a hard-fought win as it was Nizhnekamsk who got on the board first – Georgy Sitnikov made the opposition pay for committing a mistake at the blue line and beat goaltender Mikhail Isayev on a breakaway. Yekaterinburg brought it back to even with just over a minute remaining to play in the period – Ilya Zakharov picked up the puck in the slot and sniped a wide-open part of the net.

The hosts prevailed in the second period as they got in the lead. Sergei Sibiryakov scored on a power play and when Avto’s Semyon Bondar was in the penalty box, Zakharov cashed in for his second of the contest. Yekaterinburg’s top player carried the puck into the zone shorthanded and beat Ilya Chuvilin. The visitors did their best to turn things around in the third frame but seven minutes into it Ilya Loza capitalized on yet another power play opportunity. Vladislav Radzyakonov scored Avto’s fifth goal and Yekaterinburg enjoyed a 5-1 win on home ice. 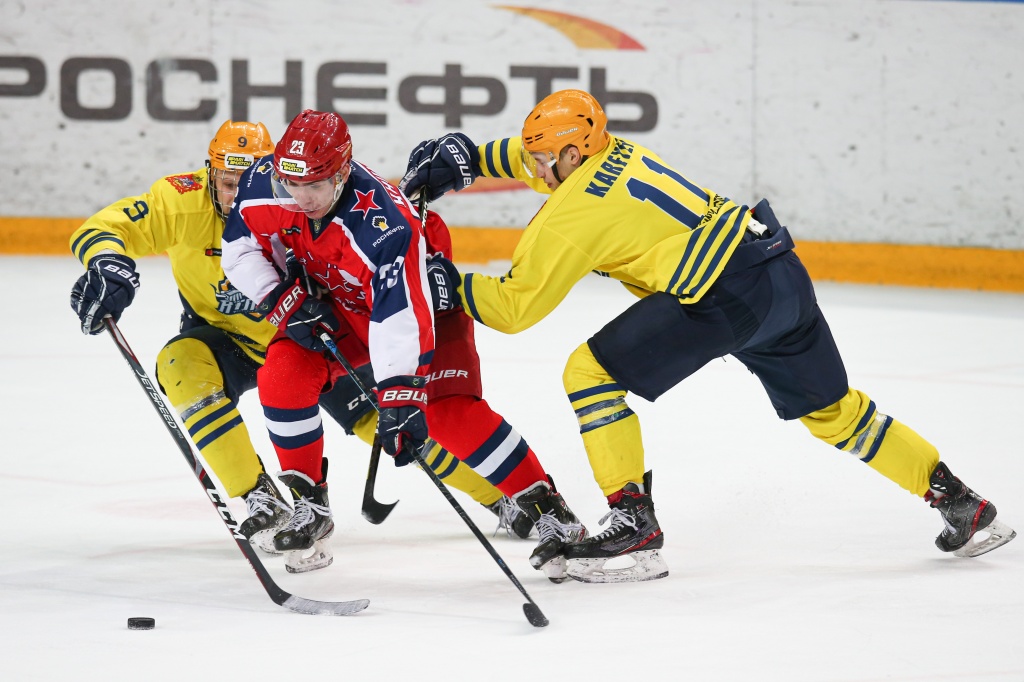 JHC Atlant Moscow Region had a lot at stake in the back-to-back series against Krasnaya Armiya Moscow at CSKA Ice Palace. The visitors have just climbed back to the playoff zone but in case of unfortunate turn of events in the capital, Atlant could have easy dropped out. The red-and-blue, on the other hand, eye to close the gap to SKA-1946 St. Petersburg, who currently reside at third place in the Western Conference. First period of play was rather tight. The hosts had almost a full minute of a 2-man advantage and yet couldn’t capitalize on it. Moscow Region had a similar opportunity right before the intermission but Krasnaya Armiya netminder Matvei Kiselyov stopped everything the opposition threw at him.

The visitors grabbed the momentum and began spending more time in Kiselyov’s territory. As a result, no team was able to find the back of the net yet again, putting a lot of stress on the third stanza. Krasnaya Armiya finally solved Botov three minutes in as Nikita Shalyshkin hit the target. The visitors had more than enough time to get the equalizer and midway through the period Aidar Valeyev restored the parity on the scoreboard. The game went to overtime and Matvei Nosov sniped the deciding goal for the visitors. With this huge win Atlant surpass JHC Dynamo St. Petersburg in the standings and rise to seventh place in Western Conference table. 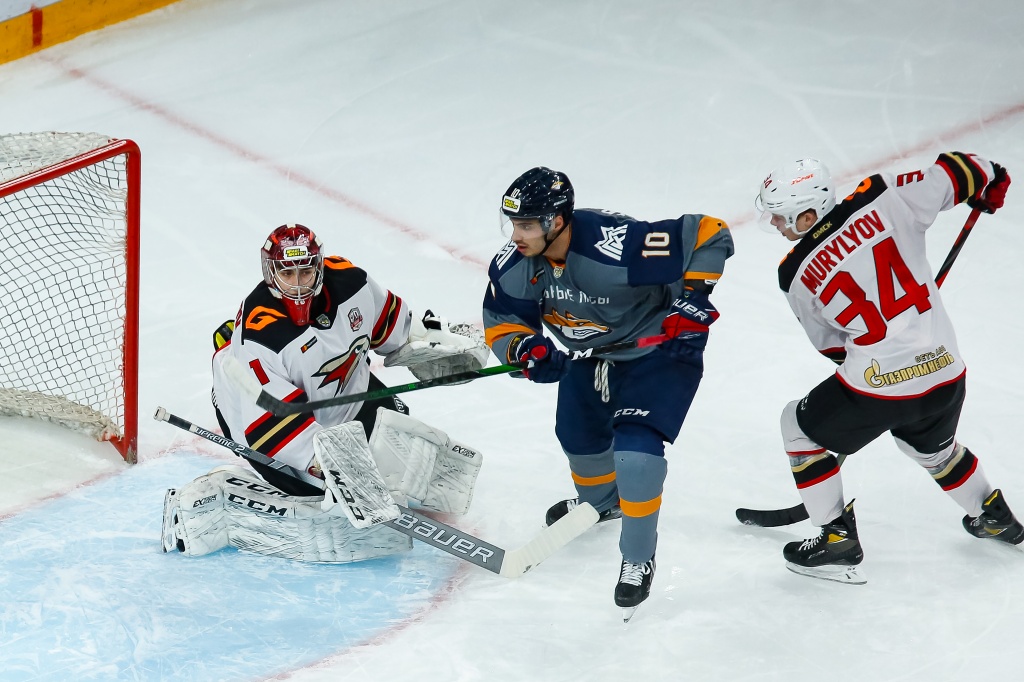 Two Eastern Conference standings neighbors met in Magnitogorsk. Stalnye Lisy, who occupy the eight spot in the table, defended the ice against Omskie Yastreby, who are currently outside of the playoff picture.

First half of the game featured no goals. The teams were tight and both goaltenders were in the zone. Key moment of the bout came midway through the second period of play as Omskie Yastreby defenseman Artyom Kulakov roughly shoved Danila Urov into the boards. Stalnye Lisy forward had to be stretchered off the ice surrounded by medical workers, while Kulakov was given a 5-minute major and a game. Stalnye Lisy got a long power play opportunity and managed to convert on it three times. Ruslan Gospodynko, Roman Kantserov and Bogdan Krokhalev got a goal each past Andrei Mishurov just a minute apart.

The visitors never recovered from the blow and couldn’t get back into the game. Despite facing a large number of shots, Ilya Nabokov was on his A-game making one huge save after another bailing his team out. Omskie Yastreby managed to liven up the bout only midway through the third stanza. The ‘Hawks’, who lead the Eastern Conference in power play conversion rate, made a man-advantage count – Vladimir Mashkov scored on a series of rebounds. The visitors tried to salvage the game, pulling their goaltender for the extra attacker but that led to Stalnye Lisy scoring on the empty net. Edgar Varagyan sent it in with a long-distance shot.

Stalnye Lisy beat their direct competition 4-1 and solidify their position as the eighth best team in the Eastern Conference. 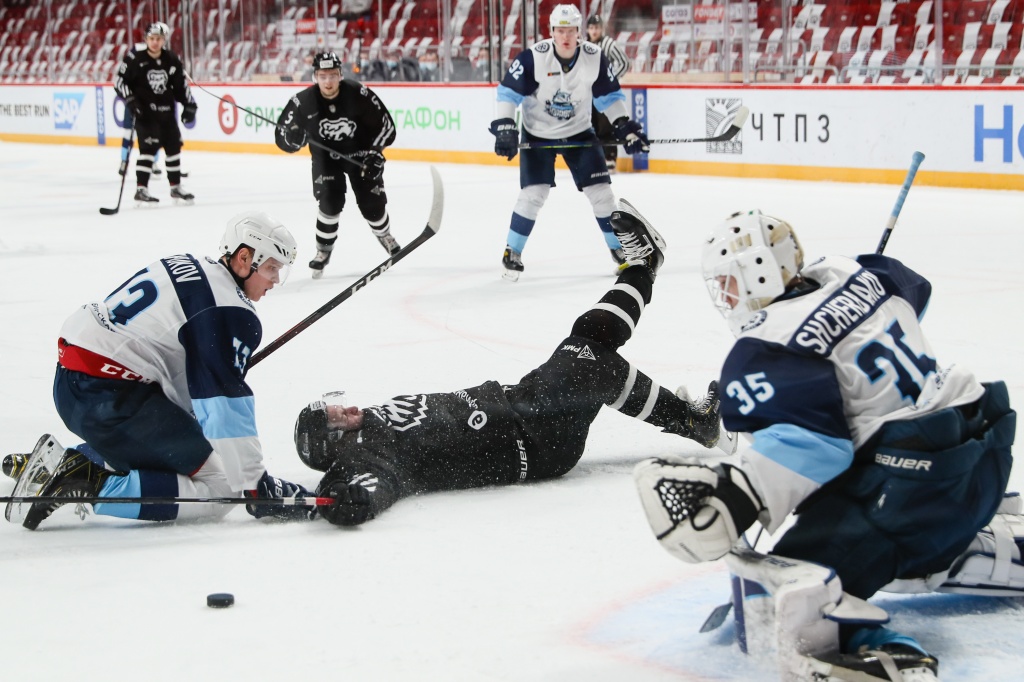 Belye Medvedi Chelyabinsk, who had lost just one game out of 12 in January to rise to Top-3 teams of the Eastern Conference, faced off against Sibirskie Snaipery – a team that struggles for point to get to the playoff zone.

The game was tight in the opening period of play. The teams were trading scoring chances and taking a lot of shots. The hosts got in the lead eight minutes in – Mikhail Romayev buried the rebound after Artym Zhukov had put it on net. ‘Polar Bears’ found themselves on a penalty kill twice after that but survived both times and carried a narrow lead into the next period.

Sibirskie Snaipery grabbed the momentum in the second stanza, picked up the pace and took twice as many shots as the opposition. Their total domination wasn’t fruitless. Five minutes after the play resumed Sergei Drugalya capitalized on a power play attempt to tie the game up. Shortly after that Kirill Kadyshev gave Chelyabinsk their second lead of the bout with a goal on a man-advantage as well, while midway through the period Alexei Rykmanov threw another one past Vladislav Scherbakov.

After the successful second period Belye Medvedi slowed the pace of the game and calmly worked the clock. With this 3-1 loss Sibirskie Snaipery lose very important points. They are now six points below the cut-off line for the playoffs, while Belye Medvedi solidify their position among the Top-3 teams of the Eastern Conference.