RUSSKIE VITYAZI TOP GOAL-SCORER OPENS UP ABOUT HIS FAILED CAREER IN FIGURE SKATING, SLEEPING ON A TRAIN AND HARRY POTTER RUSSKIE VITYAZI TOP GOAL-SCORER OPENS UP ABOUT HIS FAILED CAREER IN FIGURE SKATING, SLEEPING ON A TRAIN AND HARRY POTTER

In today’s edition of our continuing Saturday series Not A Word About Hockey we’re going to sit down with one of the top Russkie Vityazi players and the team’s top goal-scorer Kirill Kondyrev. The forward opened up about his failed career in figure skating, quoted Leo Tolstoy and spoke about the danger of falling asleep on a train.

- I’m a fan of staying active on days off. Although, I can’t always stay active on days off. I often stay home and read books or browse on my computer. I rarely get to spend any time with my friends during the season. If the weather permits, we stroll down Moscow parks.
- I have visited a lot of countries already, so I would like to visit those countries I haven’t been to – USA, Japan and Australia. While visiting USA is more of a professional interest, Japan and Australia attract me by their nature. I would really like to see a kangaroo. I would like to visit Japan, stroll down Tokyo and see how people love over there.
- I enjoy tasting different meals but I do prefer Russian cuisine. My favorite meal is cheesecake.
- I have a pet. It’s a Boston terrier named Bagrat. We brought him over from Novosibirsk. He’s about six months old.
- I have several favorite movies. Pirates of the Caribbean as well as every Harry Potter movie and Marvel Studios movies. I enjoy unusual and fantastic plots like Harry Potter.
- As for TV series, I enjoyed Escape. It was fun to watch the brothers who did everything they could to get to freedom.
- I like actors Leonard DiCaprio, Matt Damon and Will Smith. No matter where they’re casted, they always draw you in with their charisma and talent.
- I listen mostly to hip-hop and R&B. The latest track I have added to my playlist was Eya by Kangi.

- I believe myself to be a positive person. My biggest assets are sincerity, perseverance and honesty. As for my biggest shortcoming, it’s my maximalism and being too serious. I work hard and always eager to step on the ice.
- A real man must me smart, brave, responsible and honest.
- I inherited my physical aspects from my father. He used to be in power lifting and wrestling but he chose academics after graduating from high school, which put his athletic career to an end.
- Whenever I meet a new person, first thing I look at is their eyes. Just as Leo Tolstoy said, “The eyes are the mirror of the soul”. I believe that.
- I have never been superstitious. 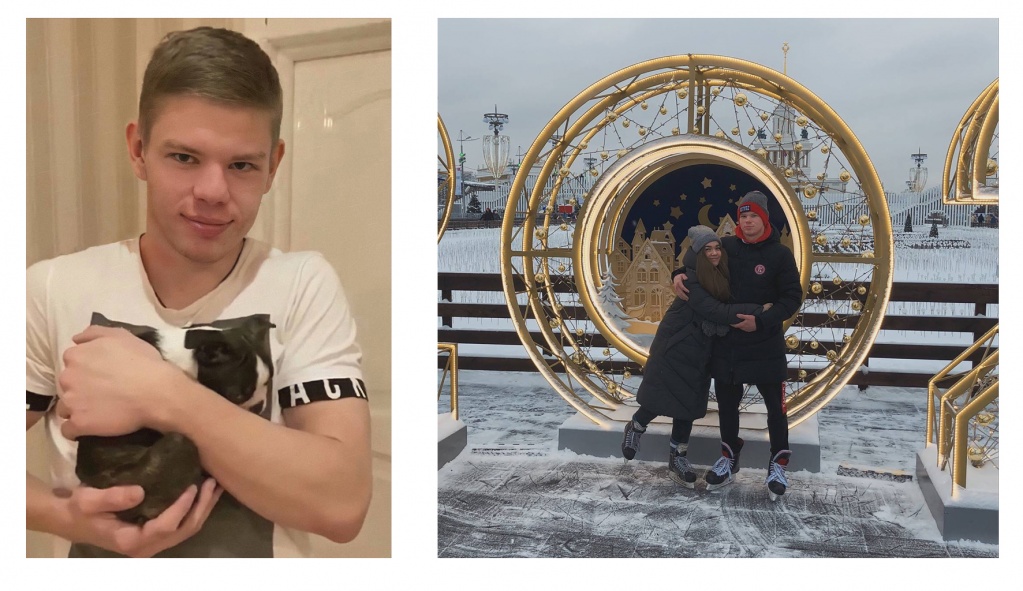 - I have a girlfriend. Her name is Alina. She likes hockey and watches all of my games. She plays the guitar, sings, draws well and she’s into photography. We met on a social media.
- I like girls who are smart, beautiful, kind and confident.
- If my son is not going to be against it, I will definitely sign him up for a hockey school, but I would rather see my daughter in rhythmic gymnastics. But above all I’m going to give my children a choice.

- I like working with computers so if it weren’t for hockey I would be in IT.
- I study at Moscow University of Finance and Teaching Synergy. I major in sports management. I study online.

- Not a lot of people know that before hockey my mom had signed me up for figure skating. After two practices I put my foot down and refused to go back.

- One time my friend and I were coming back from Moscow. We were tired and we really wanted to go to sleep. We managed to stay awake for a long time and we were just two stops away from Chekhov. We weren’t sleeping because we were so close. But looks like we might have dozed off right at the end. We opened our eyes at the same time after awhile. We looked at each other and then they announced, “Next station is Serpukhov.” That was the terminal station. Luckily, we were able to get on another train and headed back right away. Some may think that we overslept our station once again but no – this time we made it there. Sometimes we look back at the story and laugh.