Back to the list
News
EASTERN FAVORITES ENJOY WINS, MAMONTY YUGRY AND KRASNAYA ARMIYA CLINCH PLAYOFFS. FEBRUARY 26TH ROUND-UP
SAKHALINSKIE AKULY DEFENSEMAN CAME TO HOCKEY FROM WRESTLING. DOES THE EXPERIENCE HELP HIM ON ICE?
MAMONTY YUGRY AND STALNYE LISY WIN AT HOME, ALMAZ BEAT RIGA AGAIN. FEBRUARY 25TH ROUND-UP
“I STILL CAN’T QUITE GET MY HEAD AROUND THE FACT I PLAYED IN A KHL GAME”. 13 KRASNAYA ARMIYA PLAYERS LACED THEM UP FOR CSKA
FROM FULL-FACE MASK TO VISOR IN ONE DAY. NIKITA CHIBRIKOV COMMENTS ON OVECHKIN’S RECORD, EUROHOCKEYTOUR AND KHL
“MY TEAMMATES OFFERED TO RENAME THE MOVE AFTER ME”. HK RIGA PLAYER SCORES A BEAUTY
“WE WERE KIDS WHEN WE FIRST PLAYED TOGETHER”. JUNIOR HOCKEY LEAGUE TOP-SCORER SHARES HIS LINE’S SECRETS
“I DREAM TO RETIRE ON A HIGH NOTE – WITH ANOTHER KHARLAMOV CUP”. QUOTES FROM LAST WEEK’S TOP PLAYERS
MIROSHNICHENKO SCORES HIS FIRST, RUSSIAN FAR EAST’S TEAMS BEAT WESTERN LEADERS. JANUARY 20TH ROUND-UP
Share 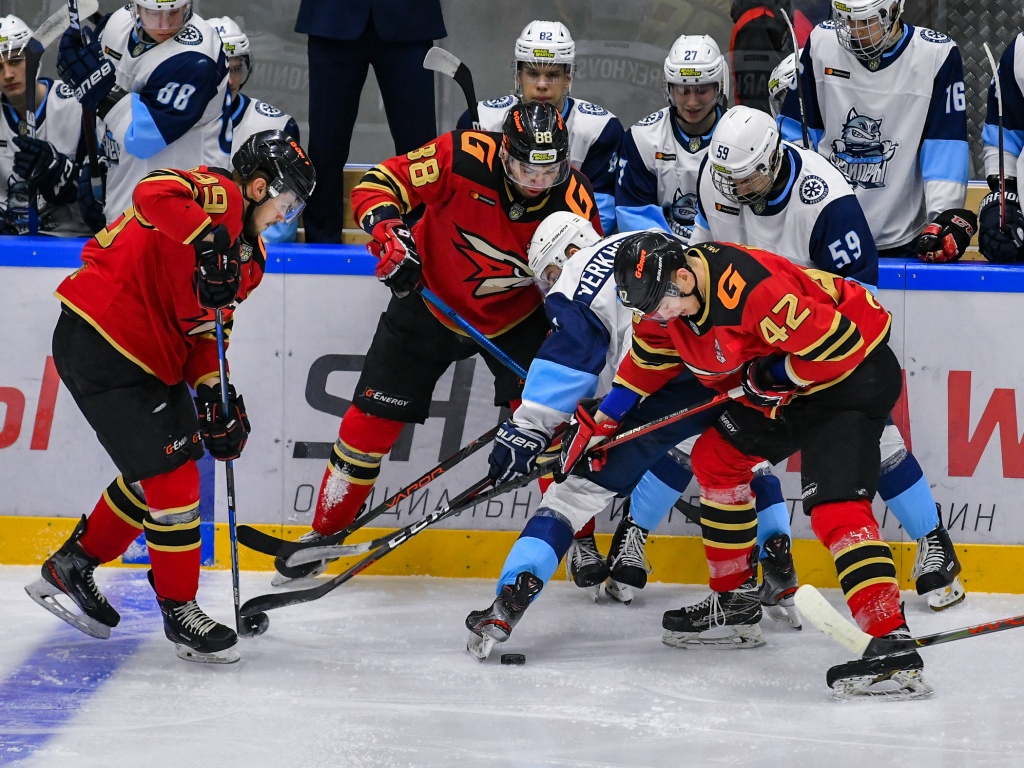 Second game of the back-to-back series held in Omsk began with evenly matched hockey. Omskie Yastreby were more aggressive but Sibirskie Snaipery did their best to catch the ‘Hawks’ off-guard with their counter-attacks, while focusing on defense. As a result, the visitors opened up the scoring once again – midway through the period Dmitry Ovchinnikov slipped one past Nikita Dianov. Following that, Omskie Yastreby picked up the pace and began playing even more aggressively, which led to second half of the period to be dominated by the hosts. Novosibirsk had a hard time keeping up with the pace of the game and took three consecutive penalties in as many minutes. The ensuing power play helped Omskie Yastreby solve Vladislav Scherbakov – Gleb Trikozov and Timofey Davydov got a tally each on the man-advantage and that took the ‘Hawks’ to a 2-1 lead after 20 minutes of play.

The hosts got off to a difficult start in the second frame. First Omsk found themselves with two men in the penalty box for two minutes, which was followed by five more shorthanded minutes in a 4-on-5 situation. Novosibirsk pounced on the opportunity to grab the momentum and began peppering Dianov with shots from all over the place. However, Omsk managed to put together a counter-attack and Ivan Miroshnichenko finished it off for his first career Junior Hockey League goal. Nevertheless, Sibirskie Snaipery closed the gap back to within one just a minute later – Matvei Belianini helped the visitors capitalize on a power play. Past the midway point of the period the hosts found themselves shorthanded once again but they were successful at keeping Sibirskie Snaipery at bay once again. But when Novosibirsk delegated a man of their own to the box, Omskie Yastreby extended their lead with another power play tally – Vladimir Mashkov made it a 2-goal game again.

Home side took another penalty early in the third stanza but managed to get another shorthanded marker out of it. Mashkov made Sibirskie Snaipery’s defense pay for a clumsy play and scored his second of the contest. The visitors’ coaching staff swapped Scherbakov for Nikita Tulinov in net after that. Omskie Yastreby took the next penalty as well but this time around Novosibirsk went on to convert on their power play opportunity – Alexei Varennik gave his team some hope. The visitors increased their pressure on Omsk’s defense and the latter had to take three more penalties in the first half of the frame. However, Omskie Yastreby’s penalty kill unit had the upper hand on every occasion. The visitors did their best to salvage the game right up till the final buzzer sounded but they couldn’t even get to within one. Omskie Yastreby bounce back and beat their rivals Sibirskie Snaipery 5-3 on home ice. 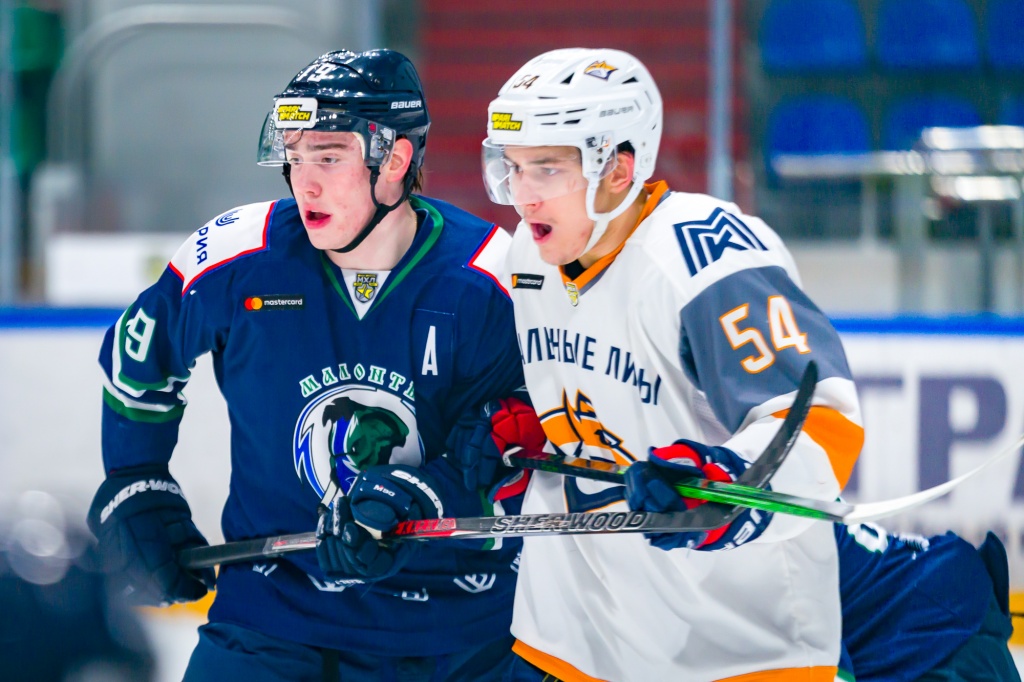 Stalnye Lisy Magnitogorsk got off to a quick start in their second game of the back-to-back series against Mamonty Yugry Khanty-Mansiysk. Zakhar Zakharov put ‘Steel Foxes’ in the lead just over three minutes into the opening period of action. The hosts had a chance to get the equalizer right after that but they couldn’t capitalize on the game’s initial power play opportunity. Stalnye Lisy evened the game out and put together several decent offensive rushes against ‘Mammoths’ goaltender Nikita Mukhametdinov. However, past the midway point of the frame it was Khanty-Mansiysk who had the momentum on their side. They gradually increased their pressure on Magnitogorsk defense but netminder Ilya Nabokov was making one spectacular save after another. As a result, despite having the momentum and outshooting the opposition the hosts couldn’t build on their lead before the first intermission.

Magnitogorsk turned things around in the second stanza. They were able to pull off menacing ventures down the ice and extended their advantage on the scoreboard six minutes in – Ilya Kvochko helped Stalnye Lisy convert on a power play to double the lead. Khanty-Mansiysk coaching staff decided to swap Mukhametdinov for Ilya Stupin following the conceded goal but the latter had another one thrown past him just over a minute later – Nikita Grebyonkin scored the third goal against Mamonty Yugry. Ivan Vorobyov put the hosts on the board less than two minutes later but that didn’t change the flow of the game. Stalnye Lisy continued to have the momentum on their side until the second intermission, having established a full control of the game and not letting the opposition to get back to within a 1-goal differential.

However, Bogdan Senotov scored Mamonty Yugry’s second goal of the night just 33 seconds into the third stanza, to restore the intrigue in the game. Five minutes later the ‘Mammoths’ brought it back to even – Igor Safonov scored the equalizer. The game evened out after that. Neither of the teams was looking to risk it by playing offensive-minded hockey. Nevertheless, the visitors were a little more aggressive, who wanted to claim the game in regulation, although their efforts were futile. The fate of the game had to be decided in the shootout and Vitaly Atanasov was the only one on both squads who scored on his attempt to bring Mamonty Yugry a 4-3 win in a hard-fought battle. 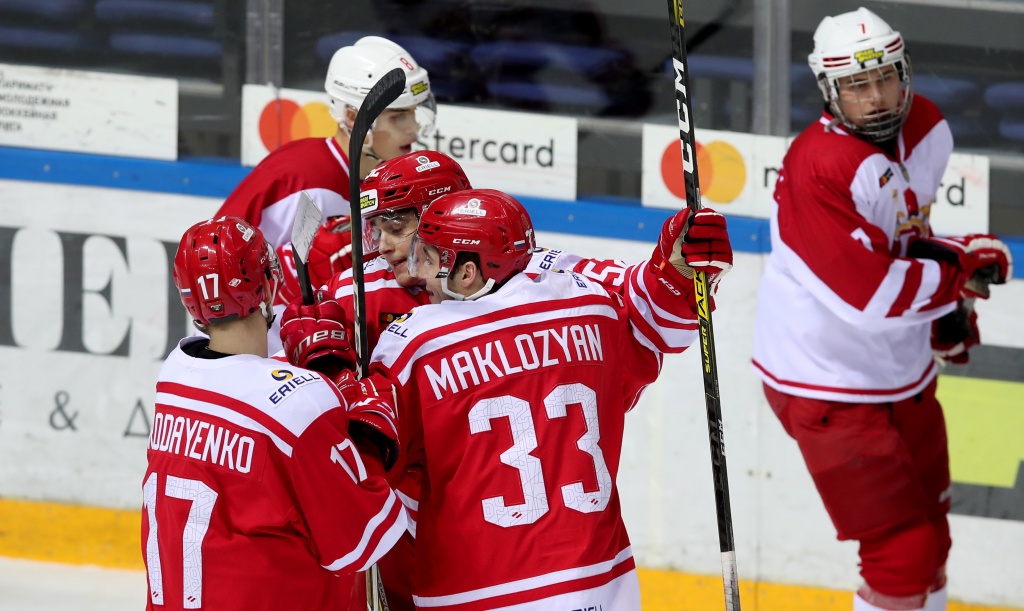 The visitors found themselves shorthanded in the opening minute of play of the game, which helped JHC Spartak Moscow pitch camp in Roman Rybakov’s territory and consequently begin peppering the netminder with shots. However, Russkie Vityazi were able to survive the early push and went on to even the game out. Nevertheless, it was still the red-and-white who opened up the scoring – Ilya Selin gave the hosts a 1-0 lead midway through the frame. Spartak continued to hold the reins of the game but their goaltender Dmitry Kulikov had his fair share of work late in the stanza as well. Russkie Vityazi got their first power play opportunity of the night right before the intermission but they couldn’t get back even before the buzzer.

Russkie Vityazi got another man-advantage early in the second period and yet let the opportunity go to waste once again. Moreover, Spartak managed to improve their lead while playing shorthanded – Dmitry Silantyev made the opposition pay for a defensive mistake and doubled the lead for his team. Moscow Region did their best to get the momentum on their side after that and did shift the play closer to Kulikov’s net but midway through the frame they found themselves shorthanded again. Having killed off the penalty, Russkie Vityazi rushed down the ice and with four minutes on the clock Ivan Dementyev finally brought his team back to a 1-goal differential. However, just as in the previous period, the visitors couldn’t level it on the scoreboard before the intermission. Spartak still had a 2-1 lead following 40 minutes of play.

The visitors got what they were looking for in the opening minute of the third stanza. Semyon Demidov restored the parity just a handful of moments after the play resumed. However, Spartak regained the lead just 40 seconds later – Matvei Kokovin gave the hosts their third advantage of the game. Moscow managed to establish a 2-goal lead for the first time midway through the frame. Oleg Korchagin sniped it home to give the red-and-white some security. Russkie Vityazi picked up the pace looking to salvage the game but Spartak played solid defense and were able to cope with Moscow Region’s offensive rushes. The hosts switched to relying on swift counter-attacks and with under three minutes remaining to play in regulation Dmitry Silantyev drew a penalty shot. He went on to convert on it, essentially putting it out of reach for Russkie Vityazi. Kirill Tagirov set the final score as he scored a shorthanded goal past Rybakov. JHC Spartak Moscow enjoy a 5-2 win on home ice. 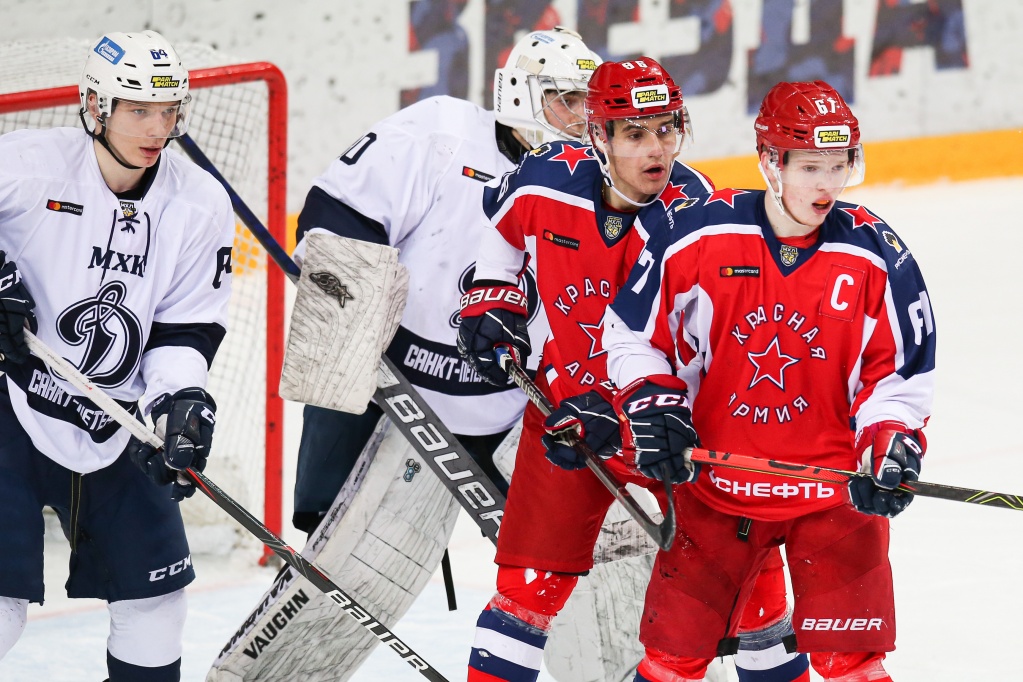 Krasnaya Armiya played hosts to JHC Dynamo St. Petersburg in Moscow. The visitors came into the game just two points behind JHC Spartak Moscow and six behind the ‘army men’. The game was even in the opening period and it was the visitors who broke the ice five minutes in – Yuri Ushakov threw it past Matvei Kiselyov. Krasnaya Armiya got the momentum on their side in the following stanza and got two goals out of it. Right after Dynamo killed off a penalty, Yegor Kuzminov scored at even strength. He went on to score his second of the contest just two minutes later and that gave Moscow a 2-1 lead going into the third period.

Dynamo managed to level it just over three minutes into the third stanza – Ignat Kokhanin made it a 2-2 hockey game. Semyon Zakharov scored the game-winning goal for St. Petersburg as he found the back of the net four minutes later. ‘Army men’ did their best to organize one final push late in regulation but the visitors pulled through. With this success on the road, JHC Dynamo St. Petersburg didn’t let Spartak establish a 3-point gap between them in the Western Conference standings. 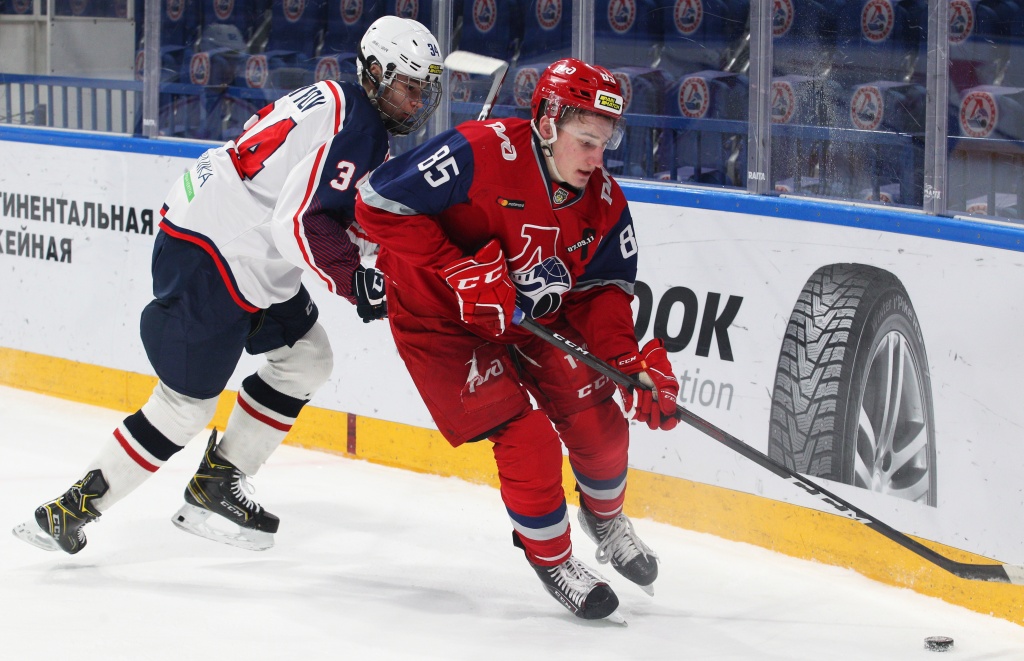 Loko Yaroslavl, who had lost the day before to Krylia Sovetov Moscow in overtime, were looking to get their revenge, while the visitors were still in a dire need of points to get closer to the playoff zone. Matvei Bannikov failed to capitalize on the game’s initial great scoring chances as his shot rattled off the bar. ‘Soviet Wings’ had their best chance of the stretch just before the intermission – Valentin Shepelev couldn’t shove the puck into the back of the net from the slot as it was melted into the ice by Yegor Guskov. First goal of the bout came only midway through the second stanza – Nikita Kiryanov took a shot from the blue line and the goaltender couldn’t react to it as he was screened by men in both jerseys. With the game 30 seconds short of the second intermission Ilya Chefanov pounced on his own rebound, went for the wraparound attempt and slipped it in to give Yaroslavl a comfortable 2-0 lead heading into the third frame.

Krylia Sovetov failed to turn things around and allowed another goal four minutes after the play resumed – Ilya Rogovsky converted on an odd-man rush. Ilya Nikulin stepped into the spotlight late in regulation as he scored twice in a span of three minutes to secure the win for the hosts. Yegor Guskov stopped all 21 shots he had to face and Loko Yaroslavl rolled on to a 5-0 win on home ice.