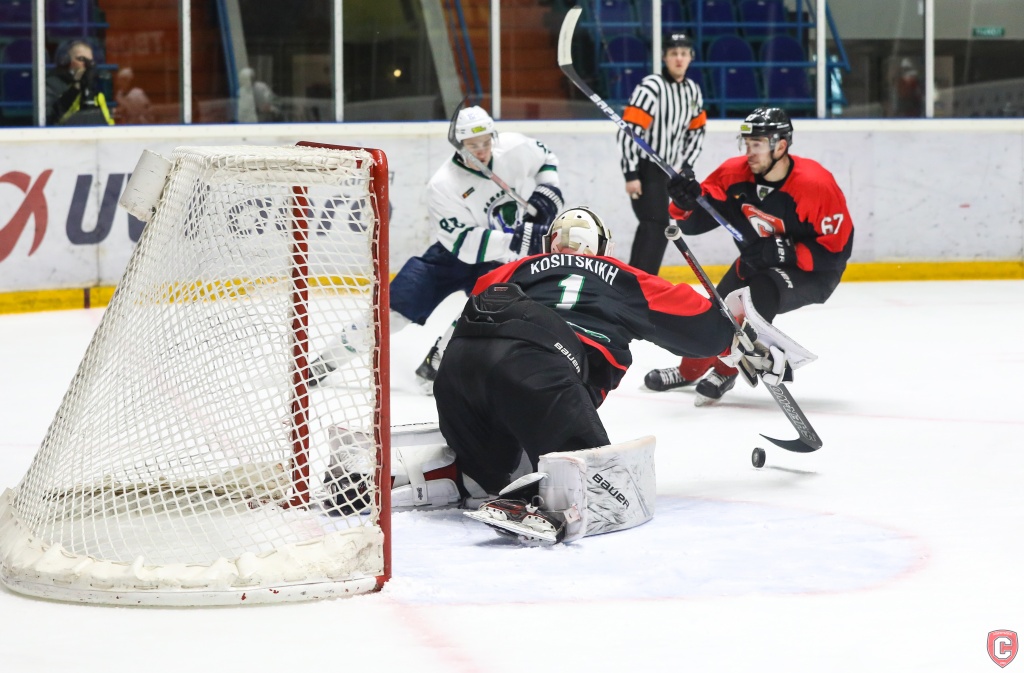 In the first game of the day, which was held in Almetyevsk, third and sixth Eastern Conference teams went up against each other – Sputnik played hosts to Mamonty Yugry Khanty-Mansiysk. Almetyevsk are being pursuit by Tolpar Ufa, while the ‘Mammoths’ need to climb higher in the standings to keep their minds at ease regarding making to post-season. The visitors did better at working towards their goal. They opened up the scoring nine minutes in as Yegor Chernikov found the back of the net. Mamonty Yugry improved their lead to 2-0 early in the second period of action – Vasily Atanasov, who leads Khanty-Mansiysk in scoring this regular season, threw another one past Rail Nasyrov. Sputnik didn’t look as solid in the offensive zone, while their opposition were spending a lot of time in Almetyevsk’s end of the ice.

As a result, Mamonty Yugry scored two more goals before the second intermission. Ivan Pavlyuk celebrated Khanty-Mansiysk’s third tally, followed by Atanasov’s second of the game just two minutes later. Sputnik delegated Makar Kositskikh after that to guard their net. He ended up stopping every shot he had to face but the hosts didn’t get to score even once. Mamonty Yugry netminder Ilya Stupin made 18 saves en route to a shutout and Khanty-Mansiysk enjoyed a solid 4-0 win on the road. 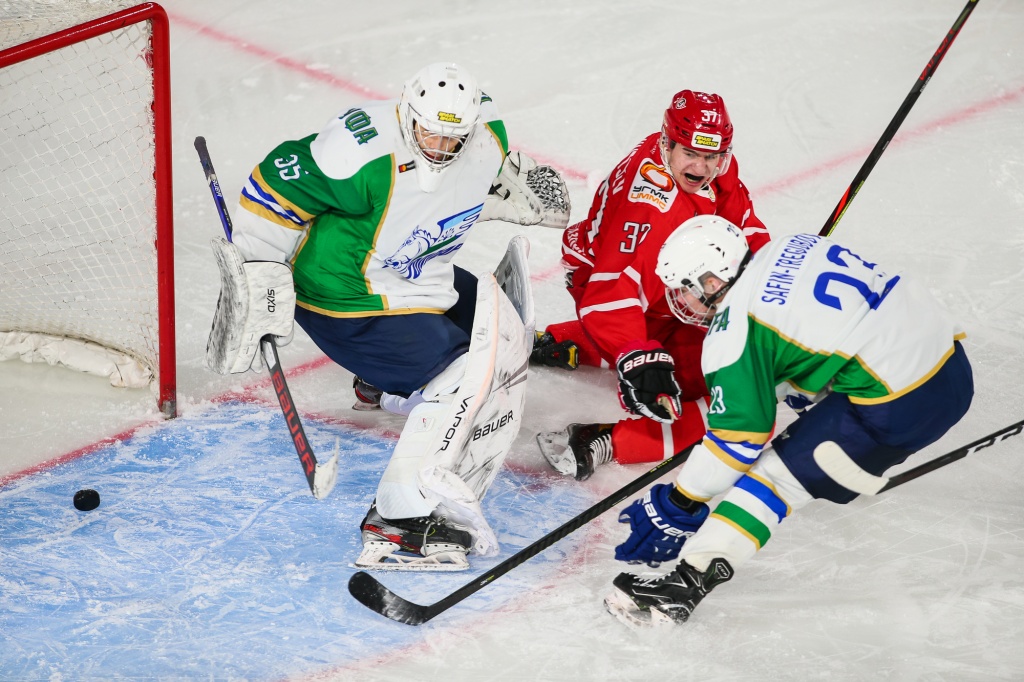 Avto Yekaterinburg and Tolpar Ufa, who are neighbors in the standings, faced off at CEC Uralets. Both teams went into the bout with 54 points in 41 games. The winner was going to surpass the other team and the hosts had the upper hand in this one. The visitors won the opening period of play 2-1 as Semyon Rubtsov and Danil Aimurzin had a tally each. Yekaterinburg wedged a goal in between – Danil Mylnikov found the back of the net. Avto did better in the second frame. Six minutes into it Alexander Fomintsev collided with a defenseman and the puck ended up behind the goal-line. After the halfway mark of the stanza Ilya Loza put his team in the lead as he capitalized on his breakaway chance and beat Semyon Vyazovoy.

With just over nine minutes remaining till the final buzzer, the parity on the scoreboard was restored – Semyon Rubtsov took a shot, the puck ringed off the iron and bounced straight to the blade of Artyom Gorshkov’s stick, who jammed it home from the doorstep. The hosts went on to score the game-winning goal in the final five minutes of regulation – Danila Okhov found himself in the right place at the right time and buried the rebound on Valery Trifonov’s shot. Avto Yekaterinburg come back from behind and beat Tolpar Ufa 4-3 on home ice. With this success Yekaterinburg surpass not only Tolpar in the standings but Sputnik Almetyevsk as well.

Krasnaya Armiya bounce back in Tula 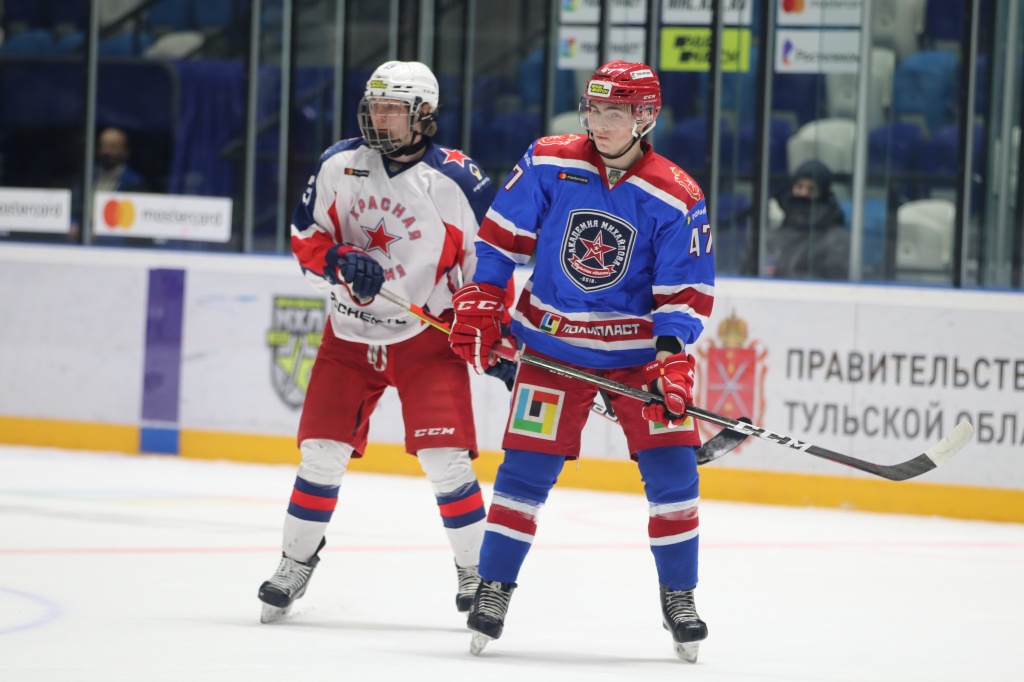 The day before Mikhailov Academy Tula pulled off a sensational upset against Krasnaya Armiya Moscow and eyed to bring joy to their fans in the second game of the back-to-back series as well. First period of action featured a lot of battles. Tula took the lead twice as Artyom Komarov and Mikhail Nizovkin got a tally each. ‘Army men’ managed to tie it up on both occasions – Nikita Shalyshkin scored one of the goals, while Moscow top-scorer Prokhor Poltapov registered the other one. The teams traded tallies in the following period as well but this time around Krasnaya Armiya scored first – Dmitry Zugan capitalized on a power play attempt. Mikhailov Academy brought it back to even midway through the frame as Artur Gimaletdinov hit the target.

Tula were unable to keep up with the high tempo of the game in the third period of play, which was offered to them by Krasnaya Armiya. With 45 seconds remaining on the clock to play in regulation Artyom Pugachyov managed to score Moscow’s fourth goal. The hosts pulled their goaltender for the extra attacker but it didn’t do them any good – the very same Pugachyov set the final score with the empty-netter. Krasnaya Armiay avenge themselves for the loss the day before and take it 5-3 on the road. 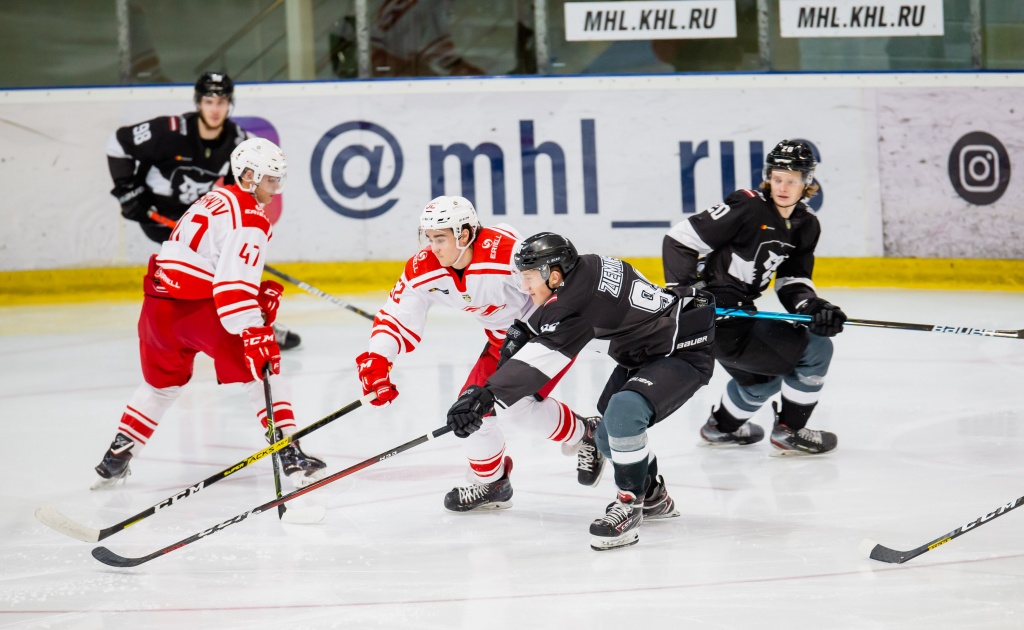 Last game of the day was held in Riga, Latvia. Dinamo’s major junior team went up against JHC Spartak Moscow. The day before the red-and-white edge HK Riga in overtime of a hard-fought bout but this time around their success was more resounding. The visitors made a great bid for the win in the opening period of play as they scored three unanswered goals. Zakhar Shablovsky notched a pair of tallies, while Dmitry Alexandrov was credited with the other goal. Five minutes into the second period Shablovsky turned his brace into a hat-trick as he capitalized on a power play opportunity, which was shortly followed by Dmitry Silantyev’s marker.

HK Riga managed to get on the board as well only after having conceding their fifth goal. Shortly before the second intermission Antons Sinegubovs sent one past Dmitry Kulikov. That was the only goal the hosts would score in the game. Early in the third stanza Andrei Legalin set the final score at 6-1. JHC Spartak Moscow leave Latvia’s capital with four points and rise to sixth place in Eastern Conference standings.