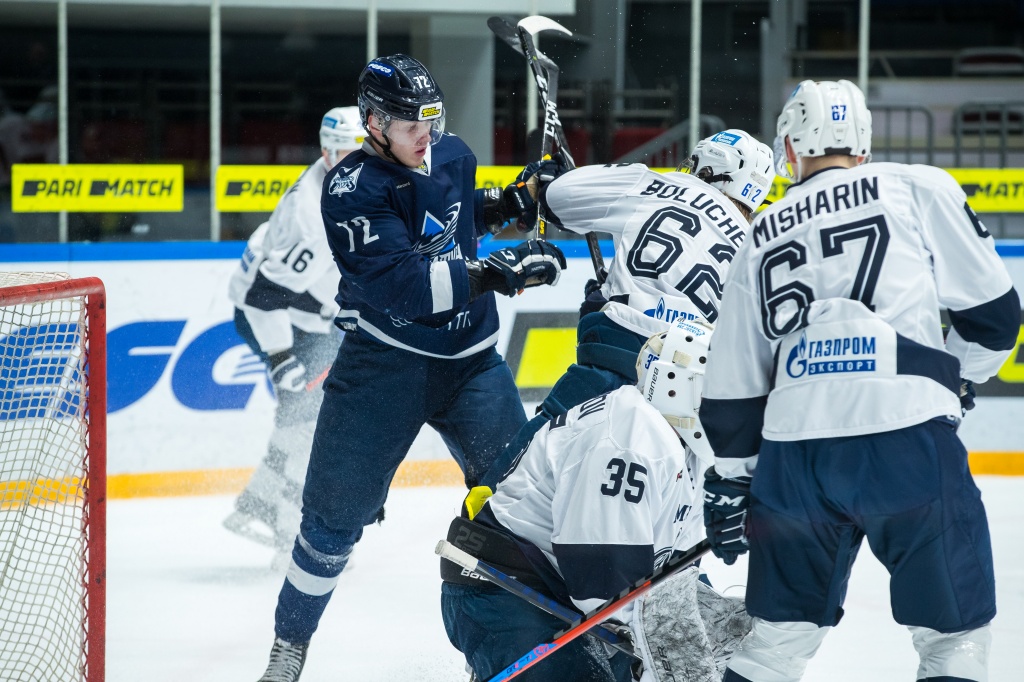 Third game of the day was held in Vladivostok at Fetisov-Arena as Taifun Primorie Region welcomed JHC Dynamo St. Petersburg. The visitors came into the game precariously positioned eighth in the Western Conference and were looking to gain points. Ignat Kokhanin solved Dmitry Sharov just under two minutes into the opening period of play to give St. Petersburg a 1-0 lead. Midway through the frame Dynamo got a penalty but they managed to make it work in their favor – Maxim Petrov scored a shorthanded goal off assist by Nikita Buruyanov. The latter went on to get a marker of his own in the second frame and it came on a power play, which gave St. Petersburg a 3-0 lead after 40 minutes of action.

Primorie Region managed to get on the board only late in regulation as Zakhar Pulchenko got it past Ivan Sapozhnikov. A little after that Dynamo took a penalty but Taifun couldn’t convert on the ensuing power play. As a result, St. Petersburg enjoy a 3-1 win on the road. 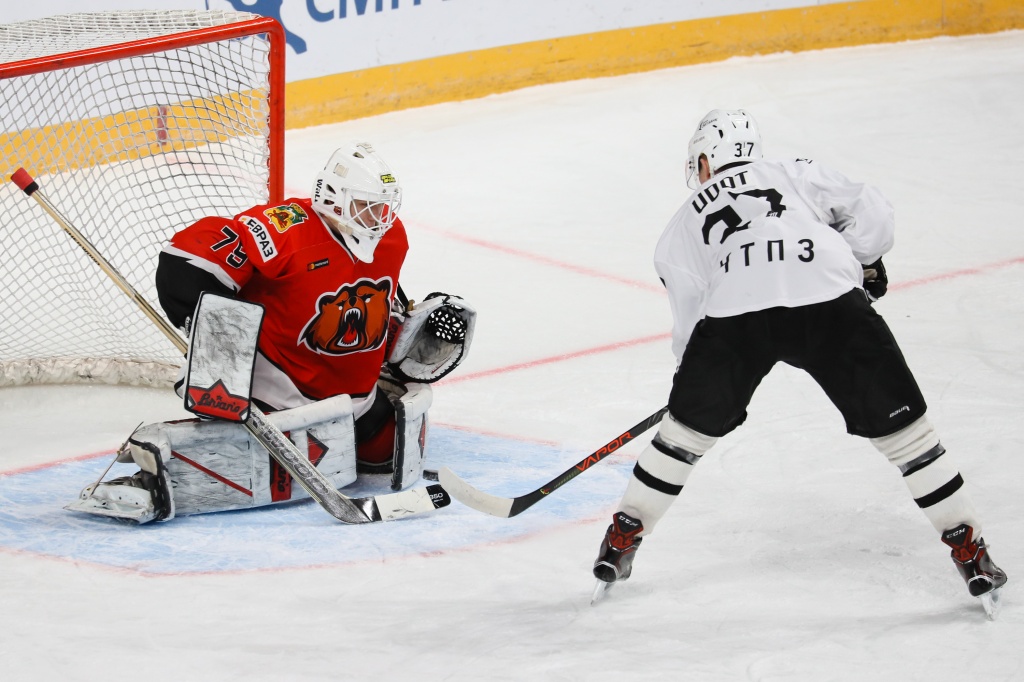 The last game of the regular season between the two teams was of a slow pace. Kuznetskie Medvedi were able to force Belye Medvedi Chelyabinsk to play their brand of hockey in the first half of the bout. The visitors were immaculate on defense – they were blocking a lot of shots and were aggressive on the forecheck, which allowed them to move the action away from Semyon Sharabarin’s goal. Moreover, Novokuznetsk went on to open up the scoring – Daniil Kozhedub was left all alone in the slot and he got the biscuit past Ilya Gorbunov. Second period of play followed a similar scenario – Kuznetskie Medvedi established a 2-goal lead as Artyom Goncharov capitalized on a power play attempt.

However, the visitors couldn’t stick to the plan for the entirety of the game. Belye Medvedi grabbed the momentum shortly before the second intermission. Semyon Buyvan sniped one home from the blue line late in the frame and with about ten minutes on the clock Danil Zinovyev restored the parity. Despite the fact the hosts dominated on the shot-clock in the final period (13-to-3) and overtime, a part of which Kuznetskie Medvedi spent shorthanded, the fate of the game had to be decided in the shootout. Yegor Gorbunov’s attempt proved to be deciding and Belye Medvedi beat Novokuznetsk for the fourth consecutive time. 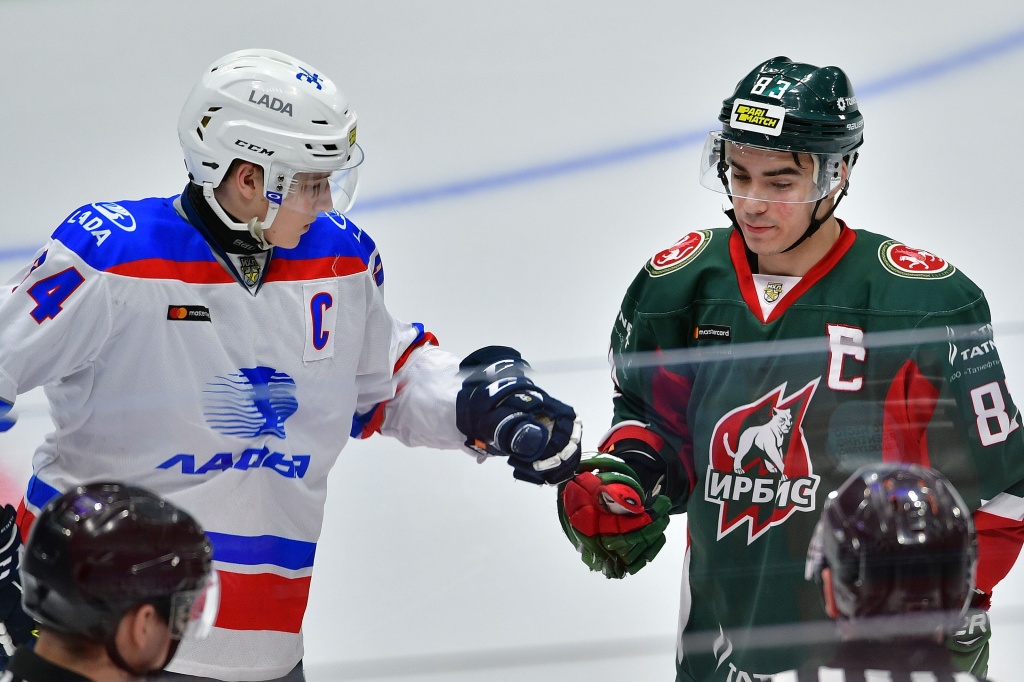 After two blowout wins over Sarmaty Orenburg, Irbis Kazan, who currently top the Eastern  Conference, challenged Ladiya Togliatti – a team that struggles battling for a playoff berth. Kazan got on the board midway through the first period of play – Danil Klimov sent it past Daniil Zakharov. The teams headed to the dressing-rooms tied 1-1 after 20 minutes as with 44 seconds on the clock Andrei Malinov solved Vladimir Mosin.

A similar chain of events unraveled in the second stanza – Pavel Kupchikhin put the hosts in the lead, while Igor Khlopotkin restored the status-quo right before the intermission. The teams traded roles in the third period of play – just a few minutes after the break Kazan took two consecutive penalties and found themselves in a 3-on-5 situation, which the visitors pounced on. Veniamin Tsitser converted on the 2-man advantage to give Togliatti their first lead of the game. Home team spent the remainder of regulation looking for the equalizer. With three minutes on the clock Danil Grigoryev was able to get his lumber on Klimov’s shot and sent the game to overtime.

Ladiya took a penalty just a handful of seconds into the extra period of play. However, Kazan weren’t able to convert on the man advantage and then allowed a goal off a counter-attack. Stanislav Rangayev jumped out of the penalty box and passed it to Yegor Plitin who scored the winner. This 4-3 success was Ladiya’s first win in 2021. The team is now eight points away from the playoff zone. 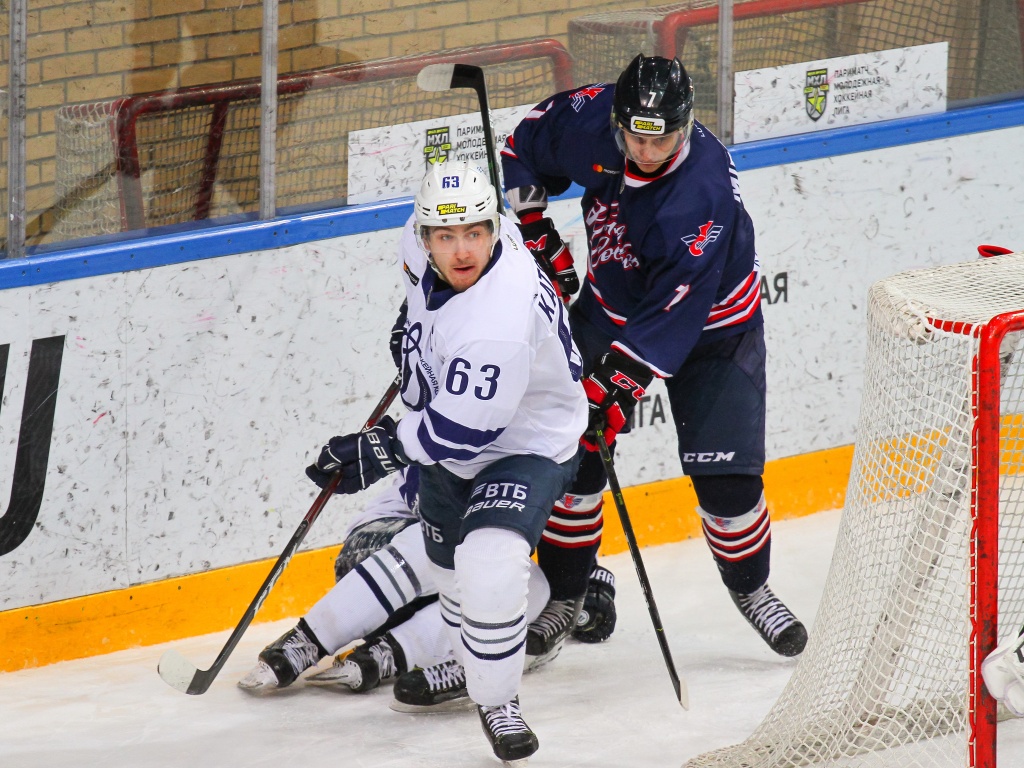 The gameday came to an end in Setun where Krylia Sovetov faced their Moscow rivals JHC Dynamo. First goal of the matchup came midway through the opening period of play – Dynamo capitalized on their initial power play opportunity of the night. Valentin Nikonorov found the back of the net.

Early in the second period Krylya Sovetov restored the parity on the scoreboard as Yegor Bugayev sent it home but then Alexander Trofimov’s men ran into a penalty problem. The hosts took two minors in less than a minute, while Artyom Didkovsky was tossed from the game. However, the visitors managed to score a goal only really late into the power play – ‘Soviet Wings’ already had four men on the ice when Matvei Nadvorny gave the blue-and-white their second lead of the game. There were just two minutes remaining till the second intermission but that was enough for Setun to get back even – Matvei Petrov converted seven seconds into a man-advantage.

Dynamo came into the third stanza down a man again – Danil Paramonov was penalized for unsportsmanlike right after Krylia Sovetov scored their second goal. ‘Soviet Wings’ got off to an aggressive start and managed to capitalize on the power play – Ildar Kashafetdinov finished off a marvelous passing play. The teams were close in the dying minutes of regulation – each offensive rush was followed by a brawl and game officials allocated six penalty minutes. Dynamo constantly peppered Yegor Naumov with shots and yet failed to force overtime. With 40 seconds on the clock Yegor Zudilov scored on the empty net to set the final score. Krylia Sovetov beat the top team of the Western Conference 4-2 on home ice, thus snapping their 3-game skid. Dynamo remain on top of the conference but see their 9-game winning streak come to a close.