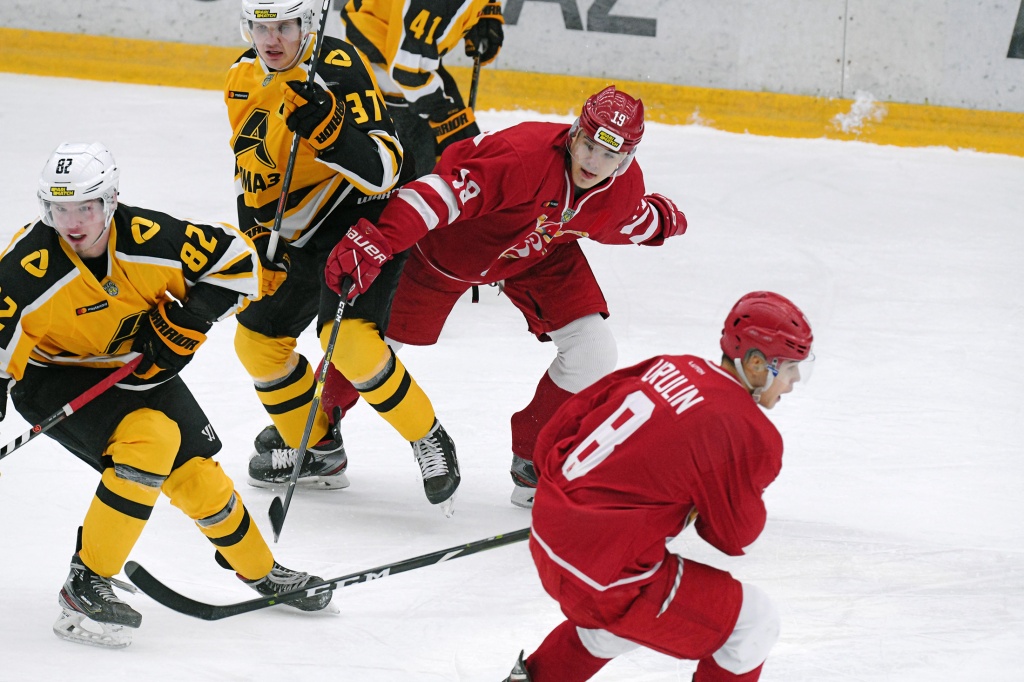 Russkie Vityazi faced off against Almaz Cherepovets in Chekhov, Moscow Region in the second game of the back-to-back series. The day before the teams had put a real show as they combined for 13 goals, nine of which were scored on Cherepovets unfortunately for their fans. However, first period of play showed that Moscow Region team wasn’t going to dwell on the past. The visitors were down 3-0 by the first intermission as Nikolai Smirnov, Kirill Kondyrev and German Shaporev found the back of the net. Notably, the latter scored his first goal for Russkie Vityazi. Almaz brought the game back to even by midway through the second frame. Timur Karimov and Yegor Chezganov got a marker each at even strength, while Dmitry Solovyov capitalized on a penalty shot.

Cherepovets took a penalty right after scoring the equalizer and Kondyrev went on to convert on the ensuing power play, putting Russkie Vityazi back in the lead. Cherepovets had a man advantage for five minutes straight after Georgy Ivanov was tossed from the game, but nothing changed on the scoreboard. The visitors were unable to level it again. Late in regulation Russkie Vityazi scored another goal – Filar Zotov found his target. Moscow Region beat Almaz again – this time 5-3. Russkie Vityazi netted 14 goals in the back-to-back series.

Krasnaya Armiya give a 2-goal lead, Spartak go on to win 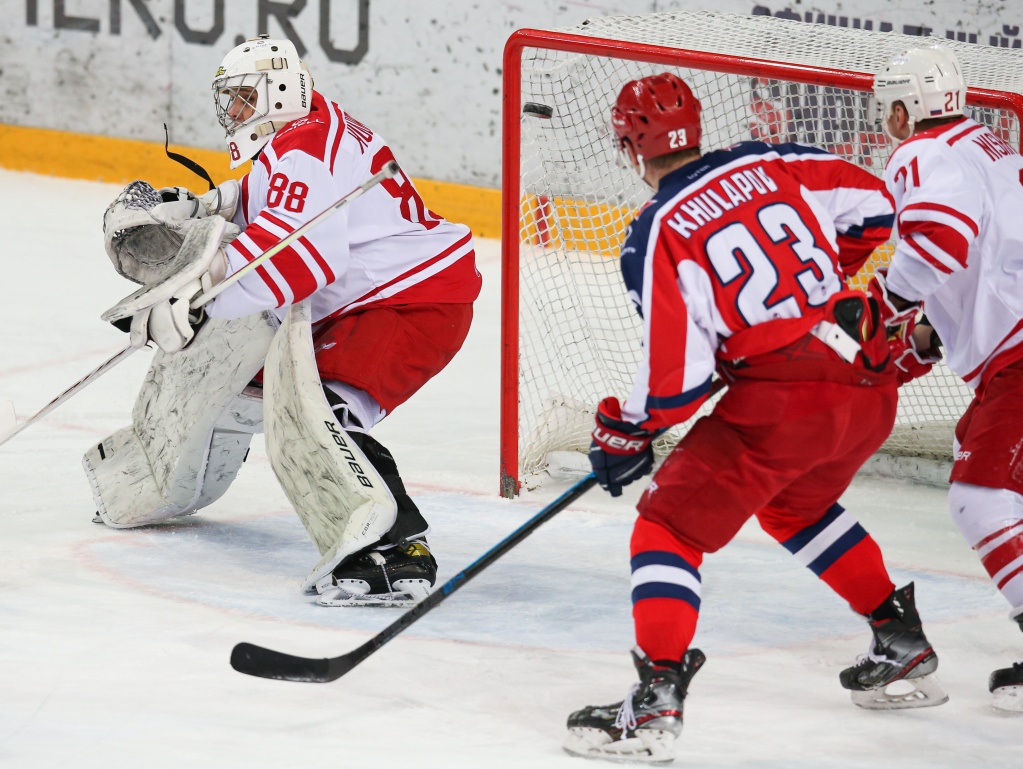 One of the biggest Junior Hockey League rivalries continued at CSKA Ice Palace as Krasnaya Armiya went up against their Moscow counterparts JHC Spartak. Having won 4-1 the day before, ‘army men’ dominated in the opening period of play, spending a lot of time in Platon Zadorozhny’s territory. The hosts failed to convert the momentum into goals, even when the red-and-white had two men in the penalty box. Spartak looked better in the second frame up until the fateful 35th minute. In a span of just 20 seconds Yegor Kuzminov and Prokhor Poltapov got a tally each to give Krasnaya Armiya a 2-goal lead.

The scoring stretch was followed by another string of penalties. Malik Alishlalov brawled with Ruslan Novruzov and shortly before the second intermission Kuzminov and Korchagin got the gate. With just over five minutes remaining to play in regulation Roman Kalinichenko got a penalty for kneeing and Spartak finally got on the board with a power play marker – Anton Mishakov got the marker. The red-and-white went for one final push and with 30 seconds on the clock Dmitry Romko found himself in the right place at the right time and slipped it past Samsonov. Zakhar Shablovsky skated past Krasnaya Armiya defenseman who lost his balance in the first minute of overtime and scored on a well-placed wrist-shot. JHC Spartak Moscow bounce back and beat their arch-rivals 3-2 in overtime. 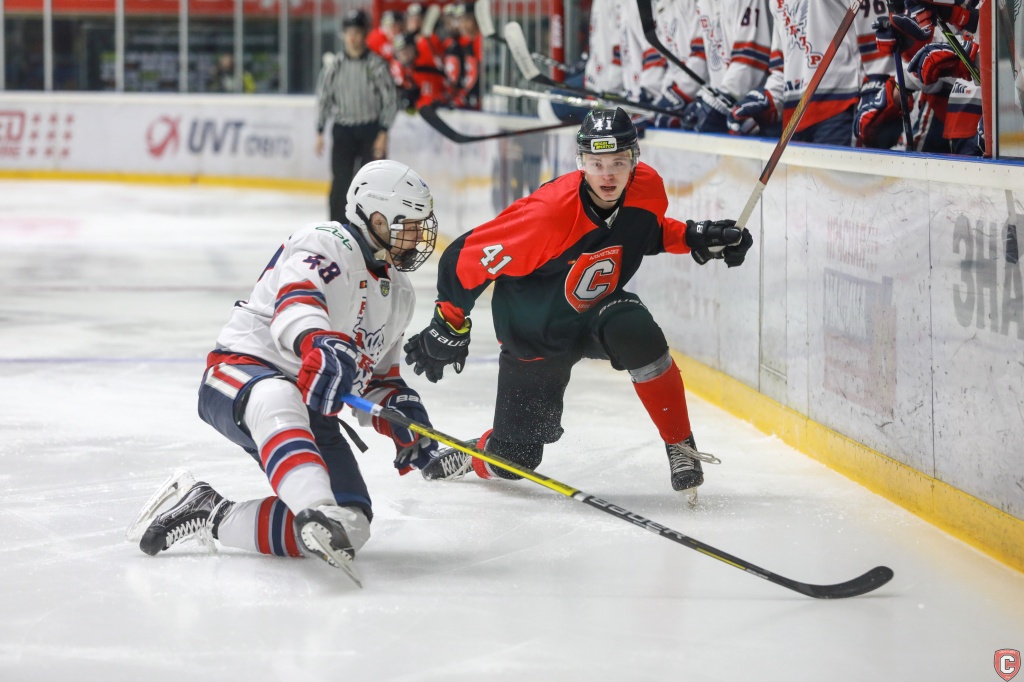 In the only Eastern Conference bout of the day Sputnik Almetyevsk battled with Reaktor Nizhnekamsk in Tatarstan rivalry. The teams occupy different poles of the table and aim for very different goals but when they hit the ice together, exciting scenarios do occur. This bout was no exception. Almetyevsk took almost twice as many shots as the opposition in the opening period of play but it was Reaktor who got on the board. Moreover, Nizhnekamsk scored two consecutive goals – Maxim Polkin and Aidar Kharisov got a marker each. It took the hosts ten minutes to restore the parity – Rail Kabirov and Timofey Okruzhnov made it a 2-2 hockey game.

After the high-scoring first frame the teams focused on defense and the third stanza wasn’t too eventful. Nobody wanted to take any risks and the game went to overtime and it was Andrei Sholgin, who has been Sputnik’s leader in recent years, won the extra point for Almetyevsk. He converted on a power play, making Sergei Martynov pay for a penalty he took late in the extra period. Almetyevsk win the first game of the back-to-back series 3-2 in overtime.