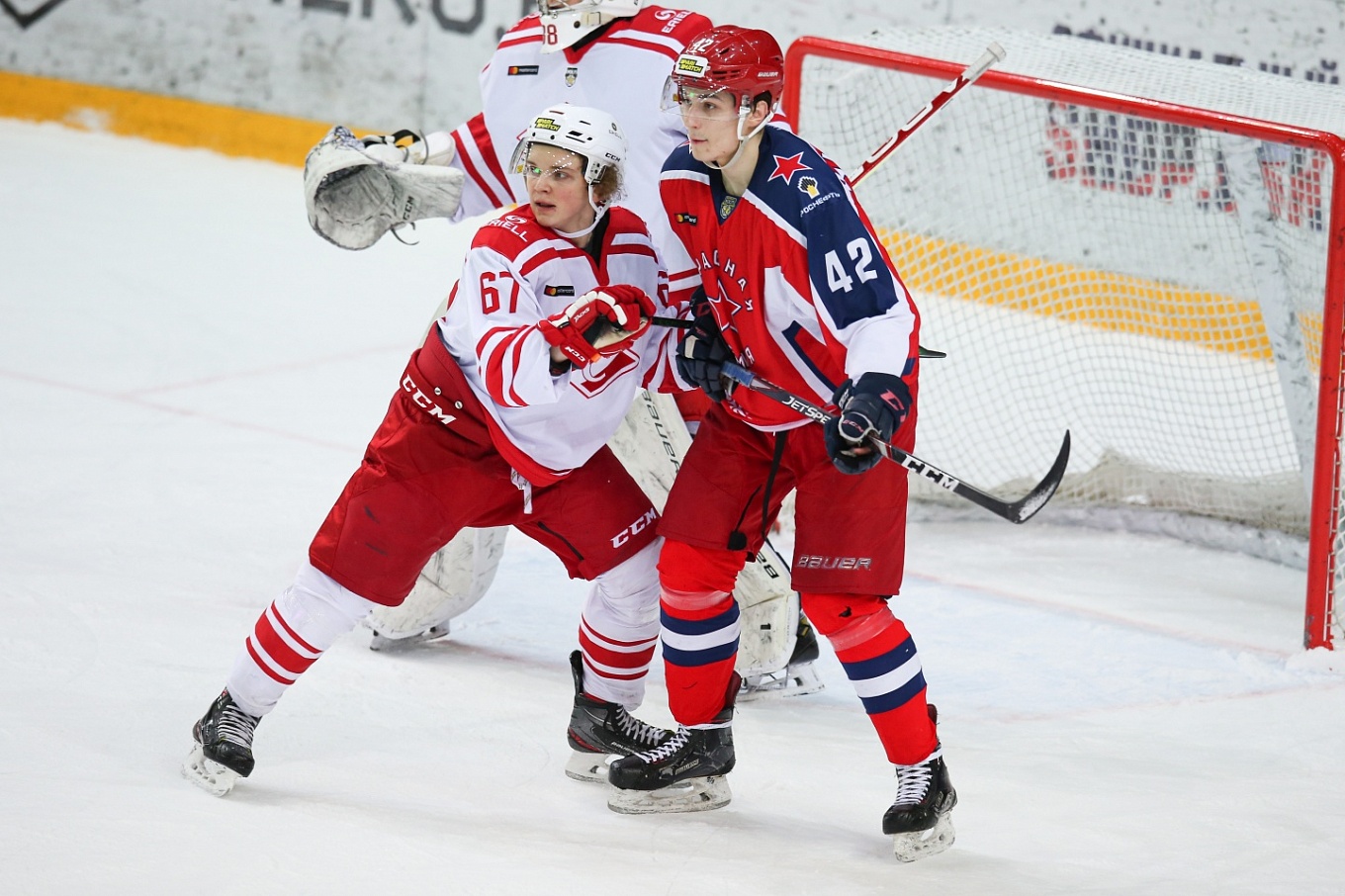 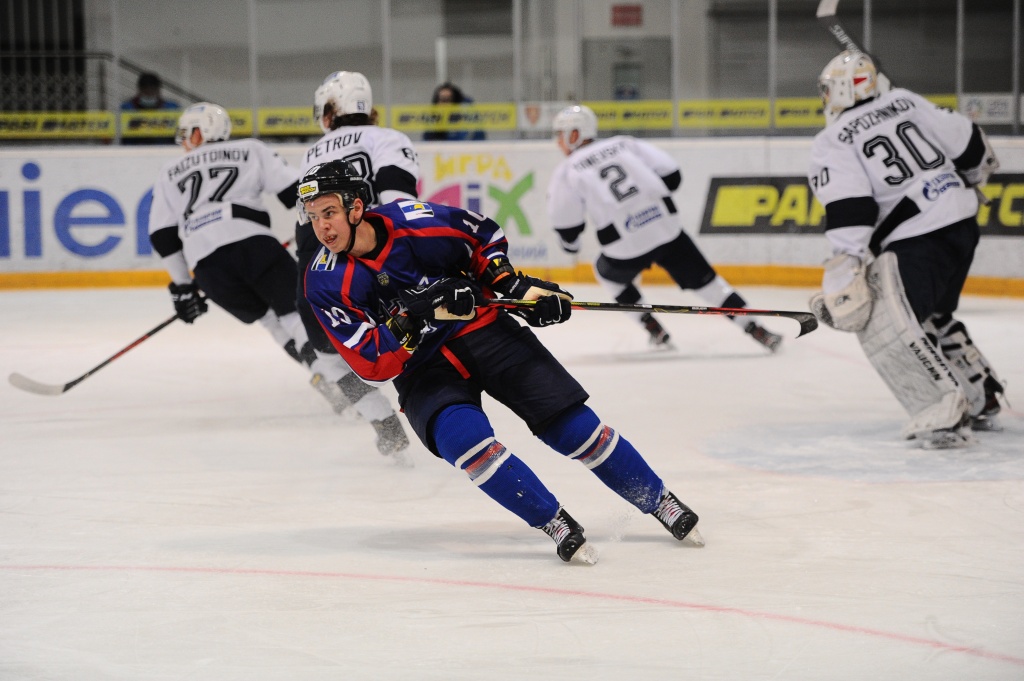 Just as the day before the game between Sakhalinskie Akuly and JHC Dynamo St. Petersburg turned to be a low-scoring affaire – there were no goals neither in regulation or overtime. The visitors were spending more time in the offensive zone in the first 40 minutes of play, outshooting the opposition and getting a ton of power play opportunities but nothing was going past ‘Sharks’ netminder Kirill Kuzmenko. Late in the third period of action Yuzhno-Sakhalinsk were closer to breaking the ice and they also had a man-advantage in the extra period but none of that led to a goal. The fate of the game had to be decided in the shootout and Sakhalinskie Akuly had the upper hand – Pavel Samsykin’s attempt turned out to be deciding.

Sakhalinskie Akuly win 1-0 and bounce back after losing to St. Petersburg the day before but the same final score. With this win Yuzhno-Sakhalinsk get closer to HC Kapitan Stupino in Western Conference standings. 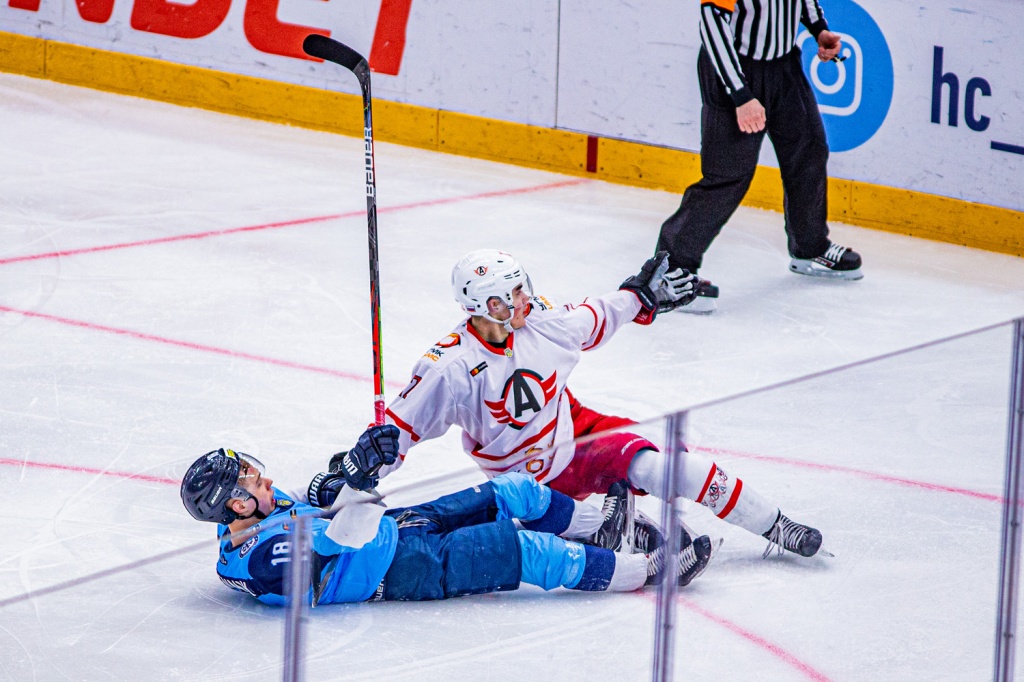 Avto Yekaterinburg and Sibirskie Snaipery exchanged quick goals in this one – Matvei Belianini opened up the scoring just over a minute into the game, while Yaroslav Sokolov brought it back to within one two minutes later as he slipped it past Vladislav Scherbakov. The visitors had the momentum on their side for the remainder of the game, outshooting the opposition in each period. Early in the second frame Ilya Loza put Yekaterinburg in the lead and that goal proved to be the winner. Late in the game Dmitry Gogolev decided to pull Scherbakov for the extra attacker but the hosts couldn’t put together one final push. Moreover, after several blocked shots Anton Chufarov scored on the empty net to set secure the win for his team.

With this 3-1 victory Avto Yekaterinburg bounce back in Novosibirsk and solidify their position at the third best team of the Eastern Conference. Sibirskie Snaipery wasted a chance to climb back to the playoff zone and remain ninth in the table. 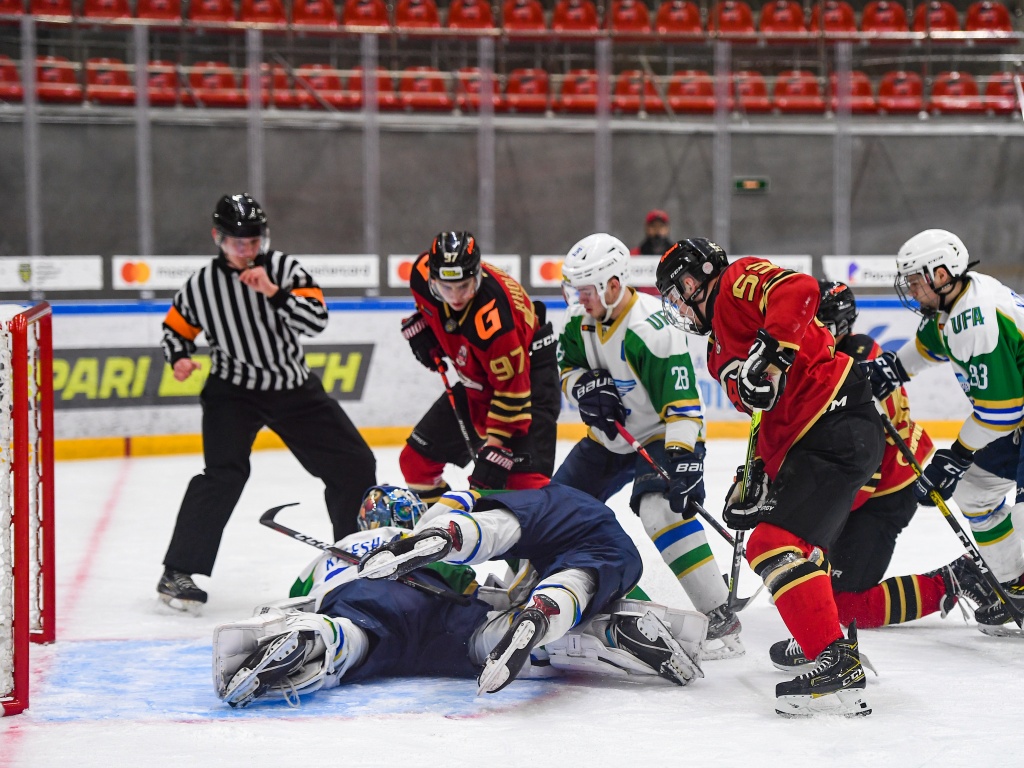 The teams opted for flamboyant and offensive-minded brand of hockey at both ends of the ice with no shortage of scoring chances throughout the game. Omskie Yastreby were more aggressive in the opening period of play – their forwards outshot the opposition and forced Tolpar Ufa to take two consecutive penalties. The visitors couldn’t survive the ensuing 2-man advantage and with a minute on the clock Gleb Trikozov opened up the scoring.

The ‘Hawks’ were able to build on their lead in the second period of action. Tolpar made a lot of defensive mistakes, letting Omksie Yastreby get in on breakaways several times. However, goaltender Alexander Kuleshov made a flurry of huge saves. Tolpar managed to get the momentum on their side in the third period and turned things around. With three minutes after the play resumed from the second intermission Yegor Suchkov solved Andrei Mishurov to tie it up and then Danil Aimurzin put the visitors in the lead. Omskie Yastreby did their best to force overtime but Alexander Kuleshov got in the zone and was stopping everything that was thrown at him. With this 2-1 success Tolpar rise to the fourth place in the Eastern Conference standings, while Omskie Yastreby fail to catch up to Sibirskie Snaipery and remain in 10th position.

Russkie Vityazi enjoy a blowout win over Almaz, the teams combine for 13 goals

The hosts got off to a better start in Chekhov, Moscow Region. Russkie Vityazi got in the lead just over a minute into the game as Kirill Steklov hit the target. Exactly five minutes later Pavel Volokitin managed to double the lead for his team and less than two minutes after that Russkie Vityazi capitalized on their initial power play opportunity of the game and threw another one past Almaz Cherepovets goaltender Artyom Nazarkin – this time Stepan Urulin was the goal-scorer. Despite the very unsuccessful start of the game, the visitors managed to gradually make up for their earlier mistakes. They began playing more aggressively, forcing Russkie Vityazi to take penalties. Almaz went on to convert on their second power play attempt of the game – Daniil Belyalov solved Savely Sherstnyov. 30 seconds later Russkie Vityazi once again improved their lead to three goals with yet another power play goal – Georgy Savin slipped one in. However, it was the visitors who had the final word in the high-scoring period – Stepan Ignatov brought Cherepovets back to within two shortly before the first intermission.

Second period of action began with offensive rushes by Russkie Vityazi as well. Home team managed to get the game under control almost right away. First they forced the opposition to take another penalty, which they couldn’t convert on, but midway through the frame Moscow Region scored another one – this time it was Yegor Zubov who filled the net. Just as in the previous period, Cherepovets did their best to turn things around but the hosts didn’t let them get even a single goal back in the second stanza. As for Russkie Vityazi, they went on to get two more tallies before the intermission – Pavel Volokitin and Nikolai Smirnov got a marker each in a span of less than three minutes to further improve the lead, forcing Cherepovets coaching staff to swap their netminders.

However, the visitors weren’t going to go down without a fight. They dominated early in the third period and got two goals back by its mid-point. Artur Yegor notched a pair of tallies to give Cherepovets a ray of hope for salvaging the game. Almaz tried to pick up the pace of the game but Russkie Vityazi were able to cope with the pressure and secured the win late in regulation. The visitors took another penalty, paving the way for Yaroslav Busygin, who solved Yegor Tulepov. And with 22 seconds remaining to be played in regulation Kirill Kondyrev set the final score. Russkie Vityazi beat Almaz Cherepovets 9-4 in the super high-scoring game in Chekhov. 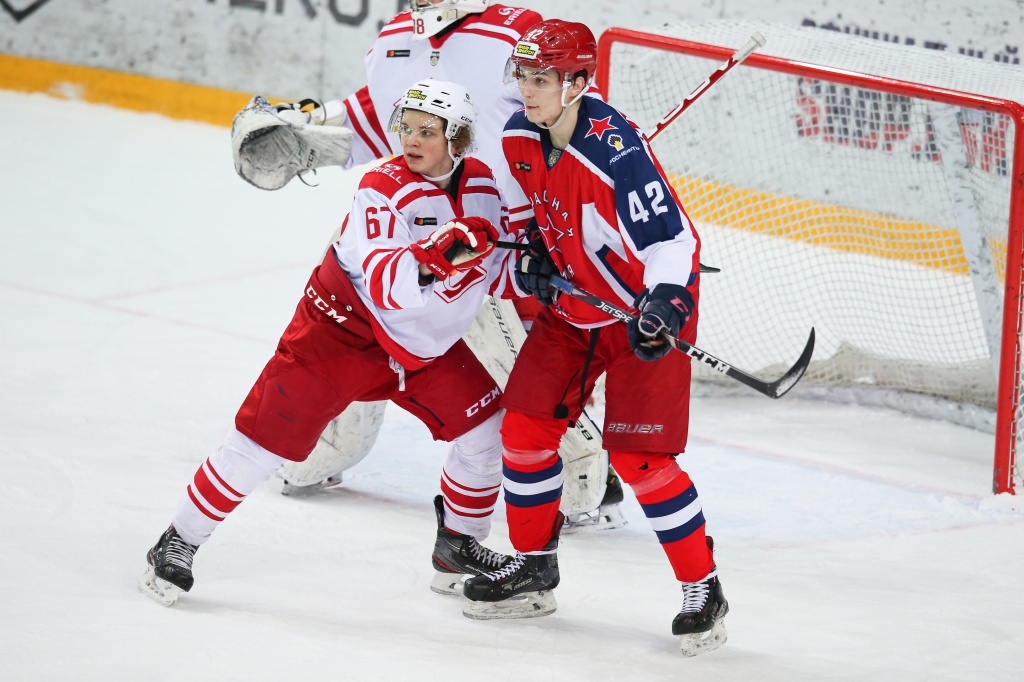 Two Moscow arch-rivals clashed in Russia’s capital as Krasnaya Armiya played hosts to JHC Spartak Moscow. The former got off to a better start – the red-and-blue got a power play attempt four minutes into the game and scored early into it as Alexander Shaposhnikov found the back of the net. ‘Army men’ continued to have the momentum on their side after that but by midway through the frame Spartak evened the game out a little bit and went on to get the equalizer – Oleg Korchagin sniped one home. The hosts got the momentum back on their side after that and began peppering Spartak goaltender Dmitry Kulikov with shots. They got another man advantage late in the period but couldn’t get anything out of it.

Second period of action in the game between Krasnaya Armiya and Spartak began with offensive rushes by the former. The red-and-blue put their money on a strong start and managed to shift the play to Kulikov’s end of the ice but this time around they couldn’t convert their advantage into goals. The red-and-white gradually evened the game out and began spending more time in Kirill Samsonov’s zone. In the second half of the period they forced Krasnaya Armiya to take two penalties in a row. Spartak pitched camp in the offensive zone and did their best to get their first lead of the game but CSKA’s major junior team defense played well and kept the opposition at bay. As a result, the two Moscow rivals were still deadlock after 40 minutes of play.

Nevertheless, the parity on the scoreboard was short-lived. Just 31 seconds into the third stanza Danila Khulapov put Krasnaya Armiya back in the lead. The game turned cautious and nervous after that. The visitors tried to retake the momentum, hoping to get back even, while the ‘army men’ slowed the pace of the game down a little and switched to relying on sharp execution of transition plays. The hosts got two consecutive penalties, giving the visitors a solid chance to get the equalizer but Spartak failed to cash in. Having survived the penalties, Krasnaya Armiya recalibrated their offense and with seven and a half minutes remaining to play in regulation scored their third goal of the night – this time Yegor Kuzminov hit the twine. Four minutes later the hosts put it on ice – Prokhor Poltanov threw one past Kulikov, setting the final score of the game. Krasnaya Armiya defeat their arch-rivals JHC Spartak Moscow 4-1 on home ice. 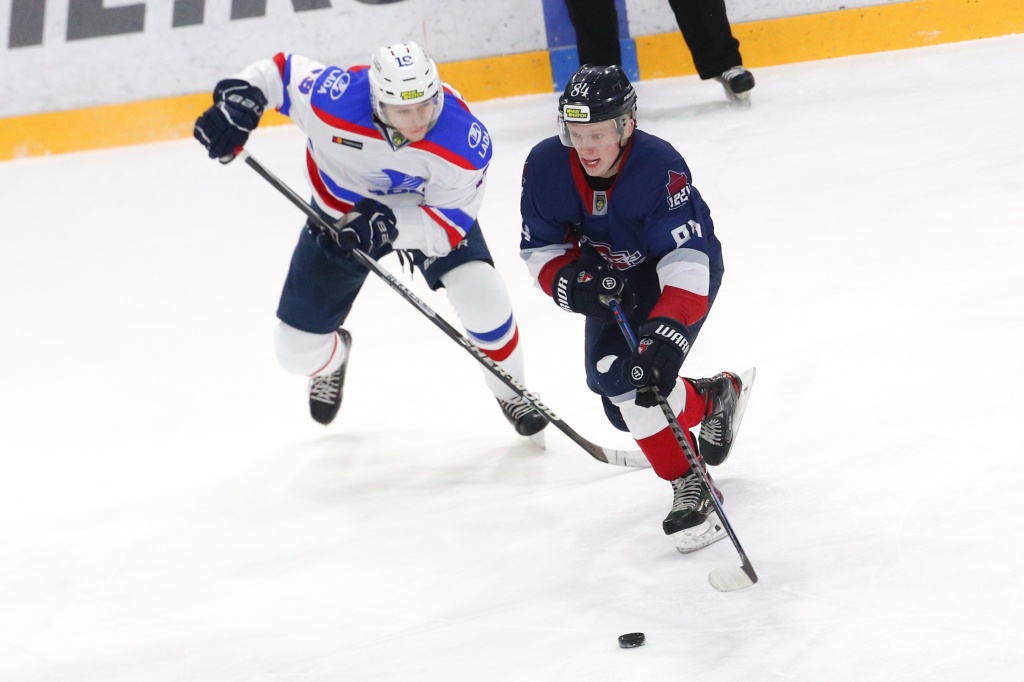 First period of action in Nizhny Novgorod featured two evenly matched teams who created scoring chances at both ends of the ice. Ladiya Togliatti grabbed the momentum right out of the gate and shifted the play to Yegor Gromovik’s net. However, Chayka Nizhny Novgorod were able to cope with the early push and survived Ladiya’s power play. The game evened out after that, even though the visitors remained the more aggressive side. The hosts got a man advantage closer to the first intermission. And they went on to capitalize on it – Denis Vengryzhanovsky put Nizhny Novgorod in the lead. They doubled their lead a minute later – Ilya Fedotov made it a 2-0 hockey game. Two minutes later Anton Vinogradov let another one in – Gleb Petrov found the back of the net, thus giving the hosts a solid 3-0 lead after 20 minutes of play.

Togliatti got more aggressive after the intermission. They got a power play in the opening minute and then solved Gromovik, despite taking a penalty themselves – Stanislav Rangayev got the marker. Nizhny Novgorod were able to keep the opposition at bay after that and forced Ladiya to take a penalty. However, it wasn’t meant to be – Yefim Bystrov helped Chayka score on the delayed penalty call to restore the 3-goal advantage on the scoreboard. Nevertheless, Togliatti totally got the momentum on their side after that. The visitors kept creating scoring chances and forced Nizhny Novgorod to take penalties. In the final ten minutes of the period Chayka found themselves short of a man three times. Togliatti took more than twice as many shots as the hosts over the stretch but Gromovik was handling it well. Chayka goaltender stopped everything he faced and Nizhny Novgorod were able to carry a 3-0 lead into the third period of play.

Home side got off to an aggressive start of the third stanza. In the first ten minutes of the period they got three power play attempts and pinned Togliatti to their net. However, Nizhny Novgorod couldn’t capitalize on either of their chances. Having survived forceful Chayka’s push, the visitors looked to turn things around but couldn’t out-battle or out-play the opposition. Second half of the period wasn’t as emotional, although Nizhny Novgorod had nothing to complain about as they went on to enjoy a 4-1 win on home ice.