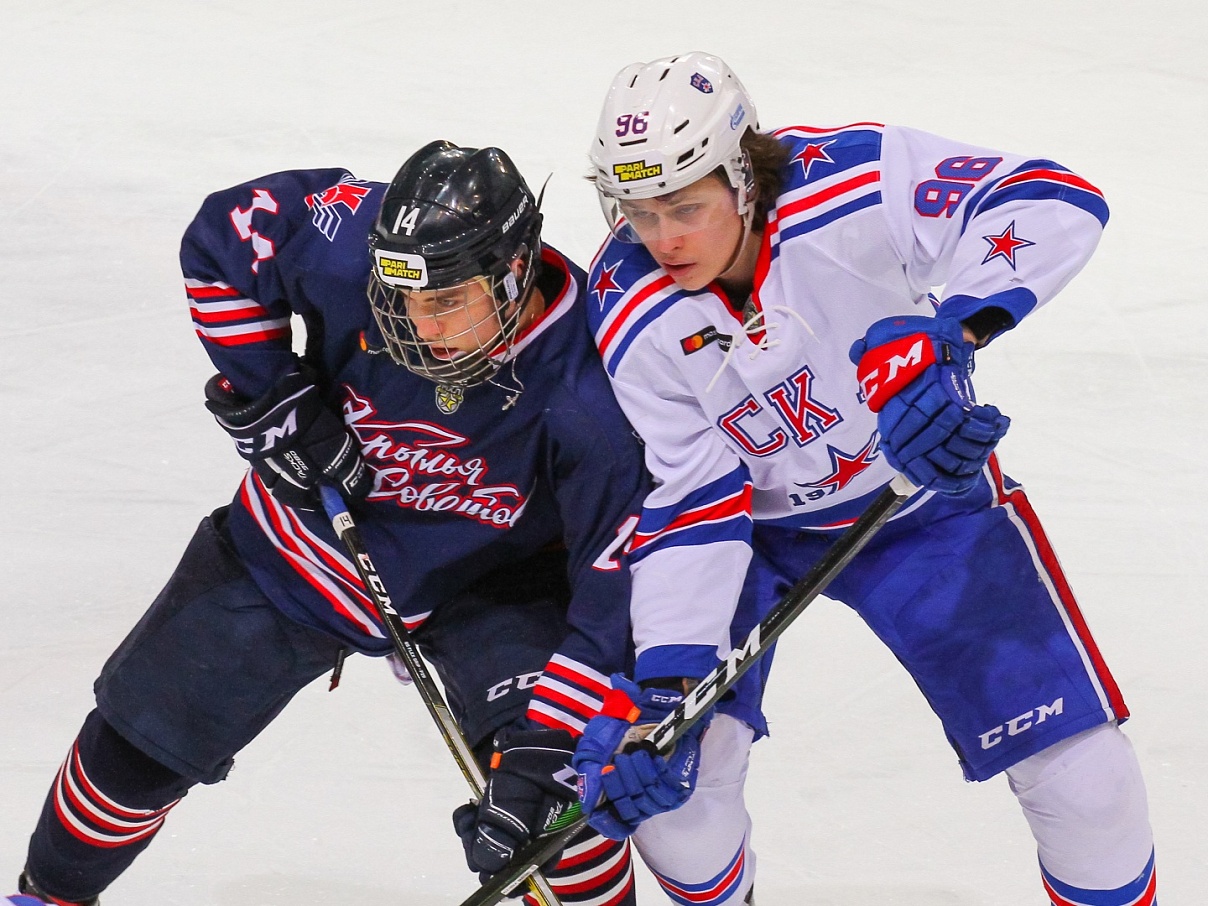 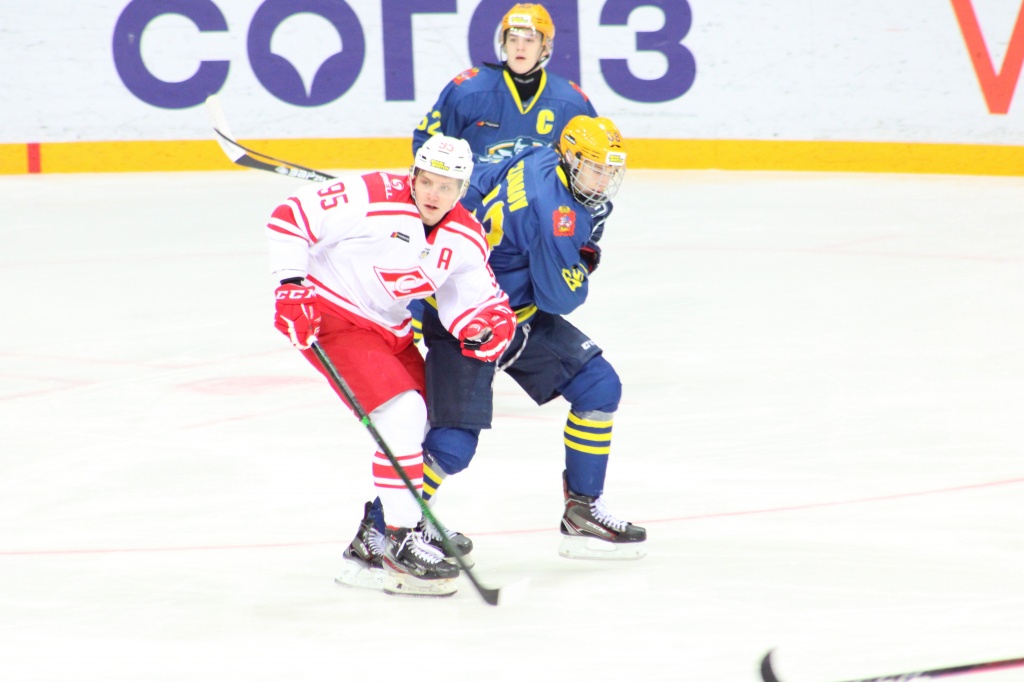 Home side seemed to play better hockey in the first minutes of the game in Mytischi. JHC Atlant Moscow Region, driven by their desire to bounce back after losing the day before, pitched camp in Platon Zadorozhny’s territory right away and even managed to throw one past him but the goal was waved off. Moscow gradually evened the game out and starting from the second frame the red-and-white began playing almost exclusively in the offensive zone. Mytischi got several penalties in a row, letting JHC Spartak Moscow freely buzz around Matvei Botov’s net. Spartak spent almost the entire second half of the stanza on a power play and finally got in the lead right before the intermission. With six seconds on the clock Lev Rogushin threw one past Botov and let his team go to the dressing-room carrying a 1-0 lead.

The game calmed down and evened out after the intermission. Atlant tried to get the momentum on their side looking for the equalizer but Spartak played well defensively and rarely let the opposition create anything at their end of the ice. Atlant players couldn’t capitalize on their scoring chances at even strength and power play, while Spartak forced them to take a penalty. And that’s when Mytischi got on the board as well – Nikita Miller found his target. However, a minute after the penalty expired Moscow Region side found themselves down by a goal once again – Matvei Kokovin put Spartak back in the lead. After that the hosts did their best to get back even but they found themselves killing a penalty late in the period once more. Nevertheless, the visitors failed to build on their advantage and went into the third frame with a 2-1 lead.

Mytischi dominated in the third frame of action. They managed to force the visitors take two consecutive penalties, which allowed them to start freely pass it around Zadorozhny’s net. Home team bombarded Spartak’s goaltender throughout the first half of the period and with seven minutes remaining to play in regulation their efforts were rewarded – Nikita Miller scored his second of the game to make it a 2-2 tie. Moscow Region slowed down the pace of the game a little bit after that, letting the visitors put together several scoring chances but neither Atlant, nor the red-and-white could score anything else before the time ran out. The fate of the game was decided in overtime. Atlant players were aggressive once again and midway through the extra period Matvei Nosov scored the game-winning goal for his team. Atlant bounce back and enjoy a 3-2 overtime win on home ice. 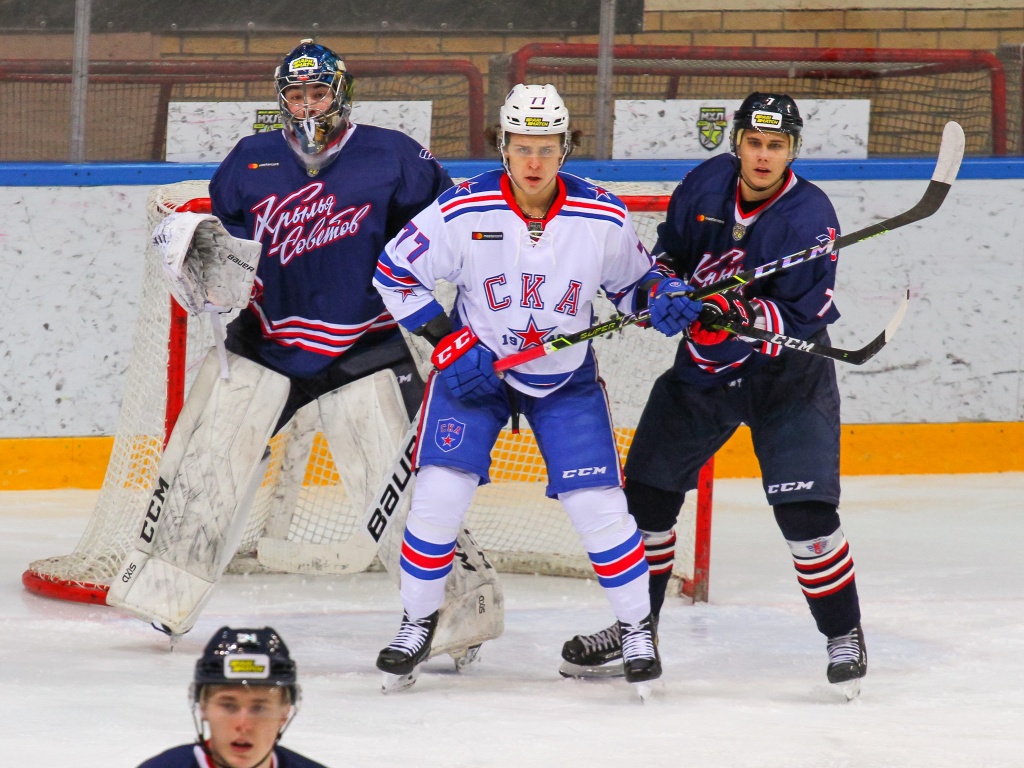 SKA-1946 St. Petersburg dominated in the first period of play against Krylia Sovetov Moscow. ‘Army men’ manage to impose their brand of hockey on Setun right out of the gate and got the first power play opportunity of the game. However, thanks to Maxim Kloberdanets’ heroics home side was able to cope with the visitors early on. The 46’s were spending most of the period in the offensive zone. They also had two man advantages midway through it but Krylia Sovetov were able to deal with the blows and keep St. Petersburg at bay. Home side had their few scoring chances only late in the period but couldn’t get anything past Pavel Romashkin. As a result, there was no scoring in the opening frame.

Second stanza began with a more even game. ‘Army men’ continued to have the momentum on their side and played with vigor, while Setun relied on counter-attacks and began increasing their number of shots against Romashkin. However, the 46’s gradually established full control of puck possession and absolutely dominated in the frame. The visitors created a lot of scoring chances but Kloberdanets brought his A-game to the table and didn’t let St. Petersburg get anything past him. Just as in the previous period, Krylia Sovetov got their handful of chances right before the intermission, when the opposition took two consecutive penalties – but they had nothing to show for it in the end as well.

‘Soviet Wings’ were able to put together several good offensive rushes early in the third period of action. Home side made St. Petersburg play their brand of hockey, took a few really good shots on Romashkin but he made a number of flashy saves and kept Krylia Sovetov unsatisfied. SKA-1946 evened the flow of the game out by midway through the frame and fixed their offensive troubles – that’s exactly what allowed them to finally grab the lead. With eight and a half minutes remaining to be played in regulation Yegor Sobolevsky fired a clapper from the blue line straight past Kloberdanets. Setun rushed down the ice looking for the equalizer but St. Petersburg stopped them with several counter-attacks. Matvei Michkov earned a penalty shot on one of them but couldn’t convert on it. Nevertheless, the visitors managed to get what they wanted. First Andrei Proskurnin finished off a passing play with a tap-in and in the last minute of regulation Matvei Michkov scored on the empty net to set the final score of the game. SKA-1946 win 3-0 and keep their winning streak alive.