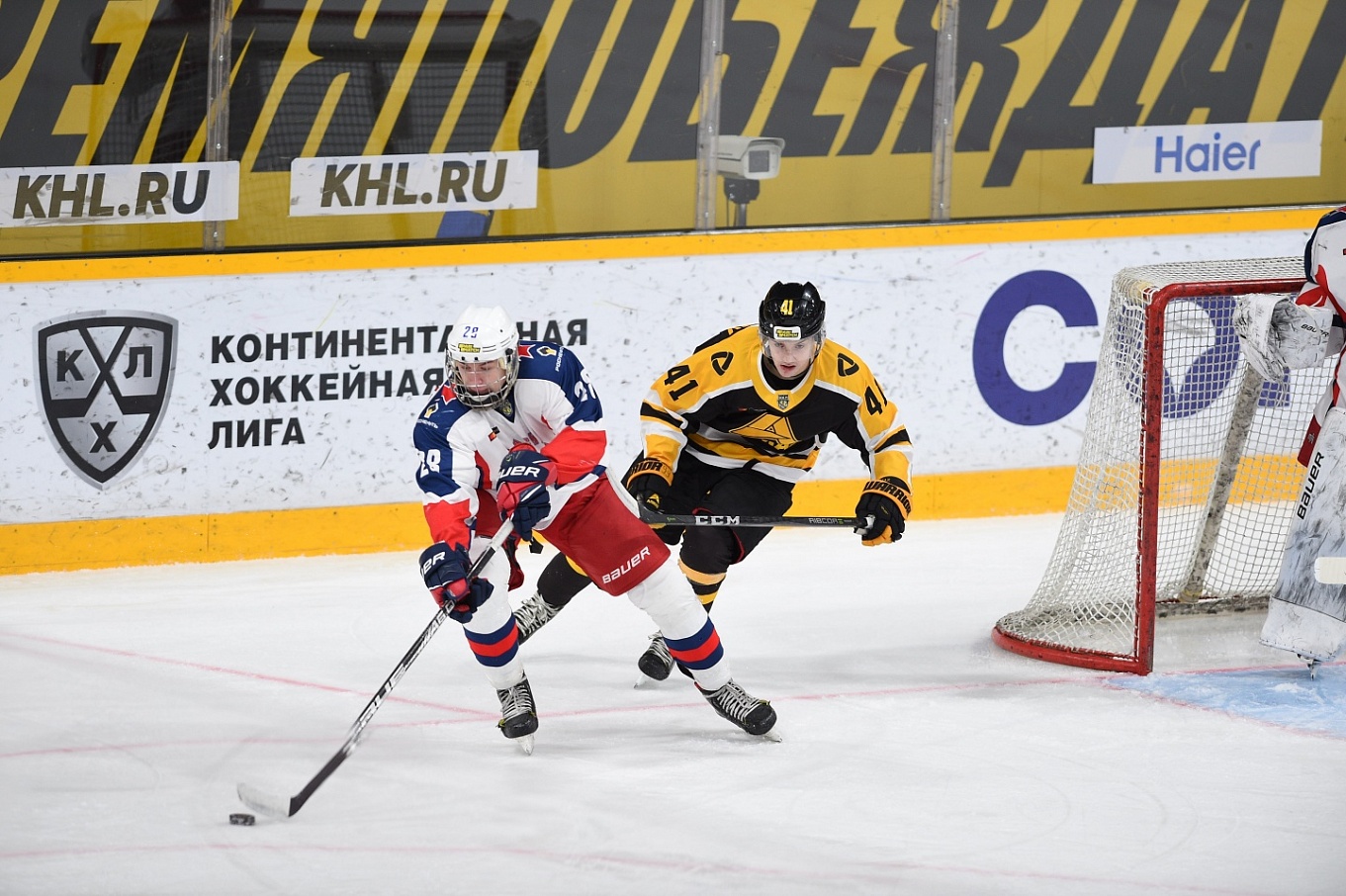 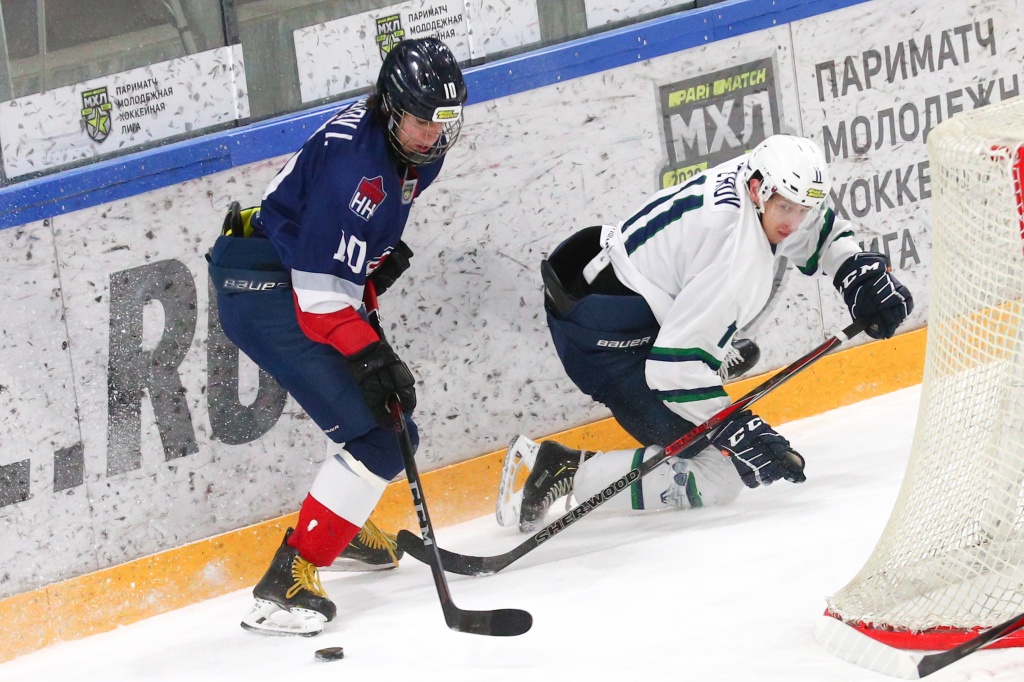 In the first game of the day, which was held in Nizhny Novgorod, Chayka played hosts to Mamonty Yugry Khanty-Mansiysk. The hosts were looking to close their gap to Irbis Kazan, who currently top the Eastern Conference, to just seven points in case of a win. As for the ‘Mammoths’, they battle with Tolpar Ufa for the fifth spot. First period of action featured a lot of physical battles and no goals. Another notable episode was Denis Pochivalov’s 10-minute misconduct for checking to the head. It’s fair to say that both netminders – Yegor Gromovik and Ilya Stupin – who have played in Junior Hockey League for years, looked good throughout the game and brought their A-game to the table that day.

Nizhny Novgorod grabbed the momentum in the second period of action and outshot the opposition, even though they found themselves shorthanded twice over the stretch. They spent a long time killing penalties in the third stanza as well but Gromovik was beyond excellent. The visitors finally solved Nizhny Novgorod goaltender in the extra period – with just two seconds remaining on the clock in overtime Arseny Varlakov scored the game-winning goal for Mamonty Yugry. Ilya Stupin made 30 saves en route to a shutout win. 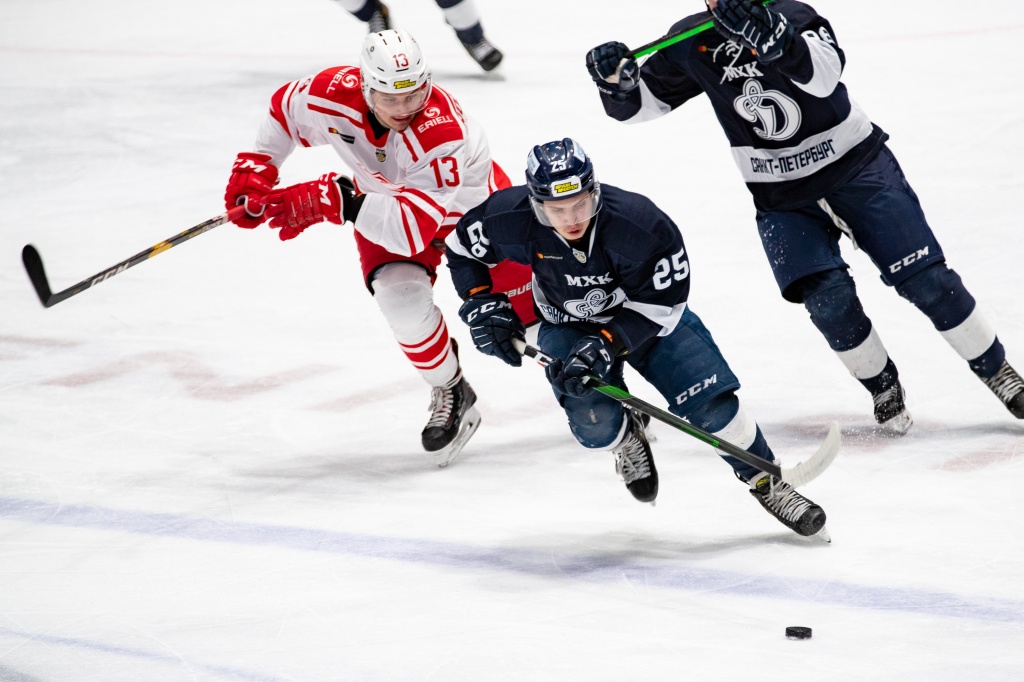 A rivalry game took place in St. Petersburg as JHC Dynamo welcomed JHC Spartak Moscow. Dynamo are currently struggling – it wasn’t that long ago that they occupied second place in the Western Conference and now the team isn’t even in the playoff zone. As for Spartak, they have been on a bit of a roll lately and they kept it going on the road trip. Home team capitalized on their initial power play opportunity of the game as Maxim Petrov found the back of the net. The red-and-white responded with a tally by Kirill Tagirov, who made Dynamo pay for a clumsy defensive play. Dynamo outshot Spartak in the second period of action but the visitors converted on their scoring chances much better – Matvei Kokovin and Rsulan Novruzov improved Spartak’s lead to two goals.

90 seconds into the third stanza Ilya Shkibtan brought St. Petersburg back to within one but Dynamo weren’t able to complete the comeback. First Bogdan Lvutin finished Oleg Korchagin’s dish at the far post. And late in regulation Kokovin scored his second of the game, sending it in right off a won face-off. With this remarkable 5-2 win Spartak solidify their position among the Top-8 teams of the West. 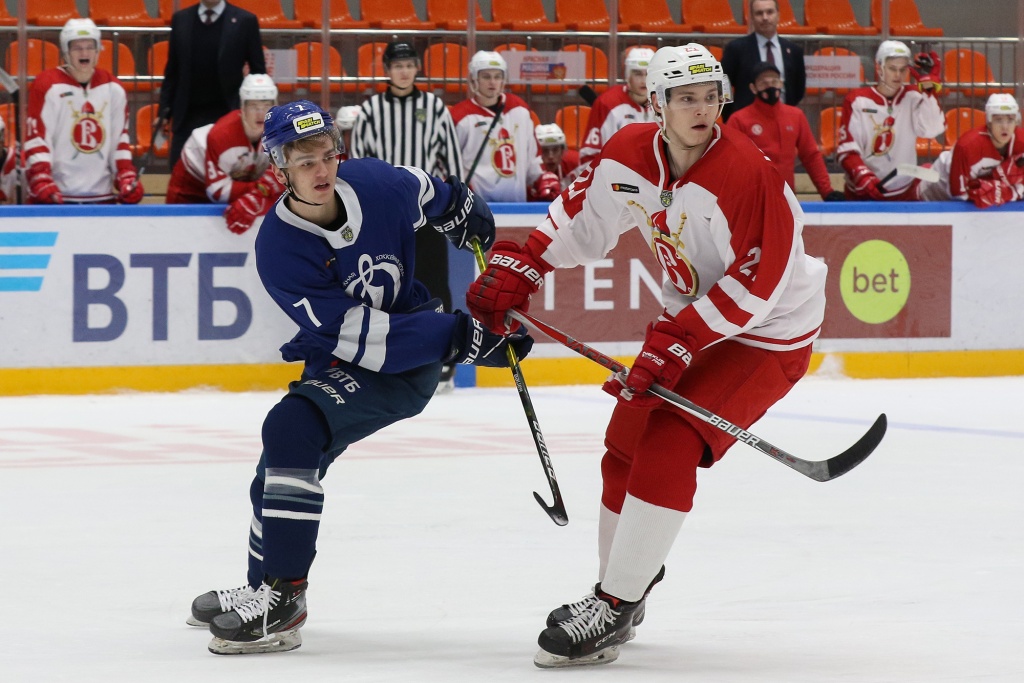 JHC Dynamo Moscow were more aggressive in the first period of play in Krasnogorsk. The blue-and-white were able to impose their brand of hockey on opposition and pitch camp in Daniil Chechelev’s end of the ice. Russkie Vityazi were able to keep Dynamo at bay at even strength and shorthanded. However, they cracked midway through the frame as Moscow put together a passing play, which was finished off by Danil Paramonov. The goal didn’t change the flow of the game – home side continued to threaten Russkie Vityazi, making Chechelev stand on his head to keep it close on the scoreboard. The visitors relied on their counter-attacks but rarely were able to bother Maxim Motorygin with any shots. As a result, after having dominated in the first period Dynamo went to the dressing-room with a 1-0 lead.

Home side came out swinging for the second stanza as well. They were able to establish puck control rather quickly and move the play to Russkie Vityazi’s end of the ice. Dynamo improved their lead just a few minutes in – Alexander Kisakov made it 2-0. Four minutes later Chechelev saw another puck going by him – this time Sergei Dyakonov hit the twine. The blue-and-white continued to dominate after that as well and soon enough further increased their lead with a power play goal – Daniil Gutik found his target. Home team slowed the pace of the game down a bit after that and committed several mistakes, which allowed Russkie Vityazi to create several scoring chances and convert on one of them – Yaroslav Busygin got a goal back for the visitors. However, Moscow Region couldn’t get back to within two and Dynamo had a 4-1 lead heading into the third period.

After the intermission it was Russkie Vityazi who had the momentum on their side and they were able to convert it into another goal early on – Alexander Mirzbalayev slipped it past Motorygin. The visitors got a 2-man advantage right after that. However, they couldn’t make it count – Dynamo survived it and went on to even the game out. Nevertheless, Russkie Vityazi continued to seek ways to crack Dynamo’s defense and kept Motorygin on his toes. At times Dynamo were unable to contain the opposition and had to make mistakes and take penalties. But was the case earlier in the period, non of their man-advantages yielded any results. Dynamo went on beat Russkie Vityazi 4-2 on home ice. 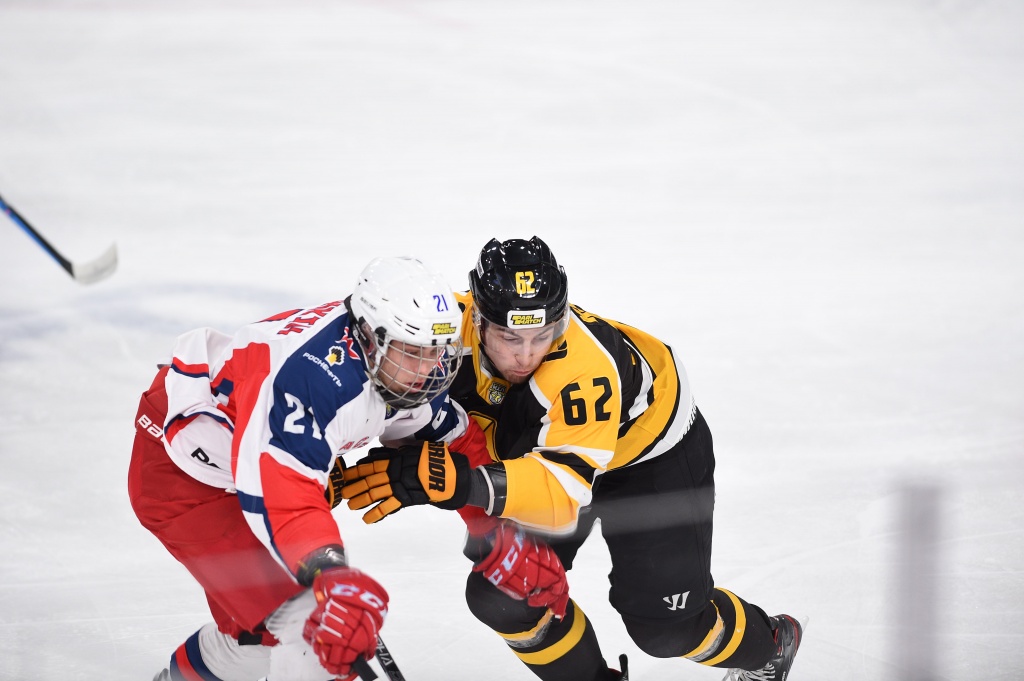 The teams came out swinging yet cautious for the second game of the back-to-back series in Cherepovets. First few minutes of the opening period of play didn’t feature a lot of scoring chances neither from Almaz nor from Krasnaya Armiya Moscow. However, the teams gradually began more aggressive on their offensive rushes and that’s when goaltenders Artyom Nazarkin and Kirill Samsonov were called to action as they had to bail out their teammates on a several occasions. Nevertheless, Almaz netminder couldn’t do anything about with Danila Karpov’s shot midway through the period as the latter put Krasnaya Armiya in the lead. Home team increased their pressure on Moscow defense after that, moved the play to Samsonov’s end of the ice and managed to get back even before the intermission as Konstantin Kidarov sniped one home.

Moscow went on to recapture the lead right after the intermission as Prokhor Poltapov capitalized on his scoring chances. That didn’t faze the hosts as they found a rather quick answer – Danila Yakovlev tied it up at 2-2. Two minutes later they were able to build on that success as Daniil Belyalov and Igor Klimov got a marker each. Cherepovets got wind in their sails and continued to dominate on the ice. Midway through the frame Almaz got a power play opportunity and Dmitry Solovyov converted on it. Having established a 3-goal cushion, home side calmed down, letting Krasnaya Armiya grab the momentum and create several good scoring chances, making Nazarkin work hard. The latter was up for the task, stopped everything he had to face and helped Cherepovets go into the third stanza with a comfortable 5-2 lead.

The visitors picked up the pace in the third period as they were looking to salvage the game. As time went on Krasnaya Armiya’s offensive rushes grew more dangerous but Nazarkin and his Almaz teammates were able to keep the opposition at bay. Moreover, Cherepovets responded with quick counter-attacks and managed to further solidify their huge lead midway through the frame – this time Oleg Bogatov was credited with a marker. With a 4-goal advantage Cherepovets were able to work the clock and shut down Krasnaya Armiya offense. Almaz enjoy a solid 6-2 win on home ice against a mighty foe.