VASILY PONOMARYOV: “IT’S ONLY THE FIRST GAME. WE WILL BE REMEMBERED BY OUR LAST” 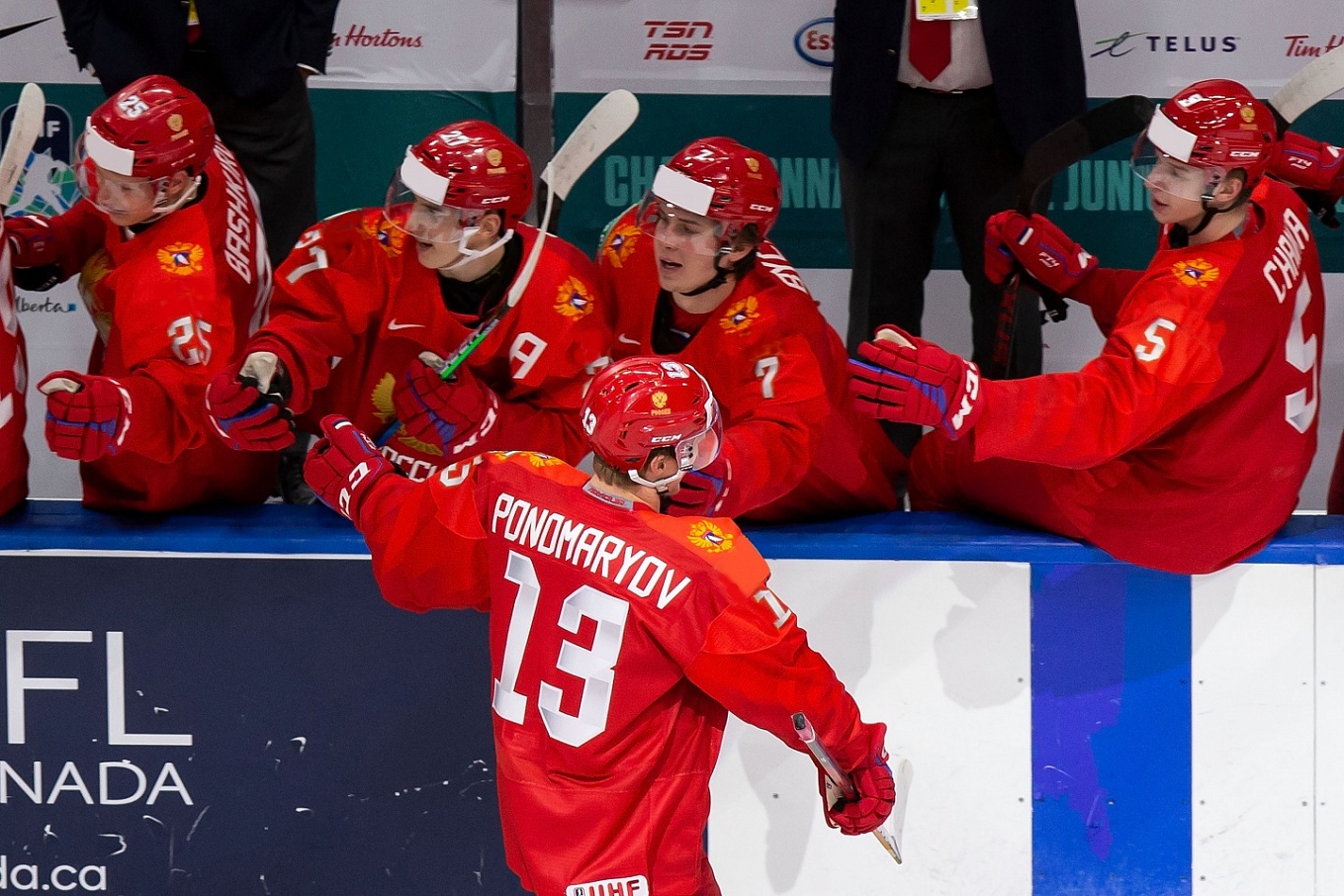 Team Russia
VASILY PONOMARYOV: “IT’S ONLY THE FIRST GAME. WE WILL BE REMEMBERED BY OUR LAST”
Share

Team Russia forwards Ilya Safonov and Vasily Ponomaryov as well as head-coach Igor Larionov shared their thoughts on their 5-3 win over Team USA in the first game of 2020 World Juniors round robin in Edmonton, Alberta.

Team Russia enjoyed a 5-3 win in their opening round robin game at the 2020 World Juniors in Canada. Shawinigan Cataractes forward and recent second-round pick by the Carolina Hurricanes draftpick Vasily Ponomaryov was named the top player of the game on Russian side in the game against Team USA as he notched a pair of goals. 19-year-old Murmansk native and KHL’s Ak Bars Kazan forward Ilya Safonov was credited with a marker.

“We went a little soft towards the end of the game,” admitted Safonov. “You just can’t do that when you’re up against either Canadians, or against Americans or against anybody for that matter. We will keep working hard and learn from our mistakes. We worked well since the beginning of the game but in the second period we just started getting more scoring chances and we were able to capitalize on them. Hard work is always welcome and it pays off. That was another example of that.”

“It was a regular hockey play. He tried to hit me hard and got a little unlucky. I wish him a healthy recovery and every other player at the tournament to stay healthy,” said Safonov.

“Tonight we play our brand of hockey,” believes Ponomaryov. “We have to play more aggressively and work on our team chemistry. I think, we’re going to keep getting better as the tournament progresses. It was an intense game. There are a few mistakes we need to address. We’re going to do our best to adjust certain details so we wouldn’t go flat.”

On working with head-coach Igor Larionov

“Obviously, it’s an incredible feeling,” acquiesces Ponomaryov. “Larionov is a legend not only in Russia but in the entire hockey world. In my opinion, he can go on to become as much a legendary coach as, for instance, [Anatoly] Tarasov. He certainly has the potential for it.”

“There was nothing different at all in these games,” says Ponomaryov. “It was only the first game. We have to keep working hard. We will be remembered only by our last game here.”

“Tonight I was happy with the way we worked as a team. I liked how invested the boys were into the game. They were very responsible and played well for the majority of the game. If I can be frank with you, I believe the boys worked phenomenally well tonight. This result is a product of combined effort of the boys and our whole team,” believes Larionov.

“At first our coaching staff built the team in a way so that there wouldn’t be a distinction between the lines,” explains Larionov. “That was our starting line in the game against Team Canada. We expect every player to make a contribution to this team’s success. I’m very happy for the boys. They played incredibly well, they looked great, played compact as a group and fed off one another. It’s great to have these trump cards that we can use throughout the tournament.”

On Canadian officials working exclusively at the tournament

“It’s obvious that we play in Canada and we don’t have a choice when it comes to that. Every game is full of mistakes and emotions. I don’t have any grounds to disbelieve and doubt the competence of Canadian officials. Their work is at a decent level,” shared Larionov.

“In such a huge game when you have two strong teams facing one another, every goaltender feels this amazing pressure coming down on him,” clarifies Team Russia head-coach. “Some goaltenders are able to cope with it and some goaltenders break under it. Mistakes were made and they occurred when we were putting that great pressure on the opposition. We’re looking for anything that will give us any edge at all and allow us to create good scoring chances. In the second intermission we spoke about how dangerous a 4-1 lead can be. We said that if you allow any breathing room to your opponents, they it can become something they draw their confidence from.

“It was a rather tough game for [Team Russia goaltender] Yaroslav Askarov. In any case, we were able to get the victory largely due to his phenomenal play between the pipes. Those things that went bad for us late in the game will be addressed and fixed. There is not a single doubt in my mind that he plays great and he will get even better as the tournament goes on. Opening game of a tournament like makes every player anxious. Especially, when you’re dealing with these really young athletes.”