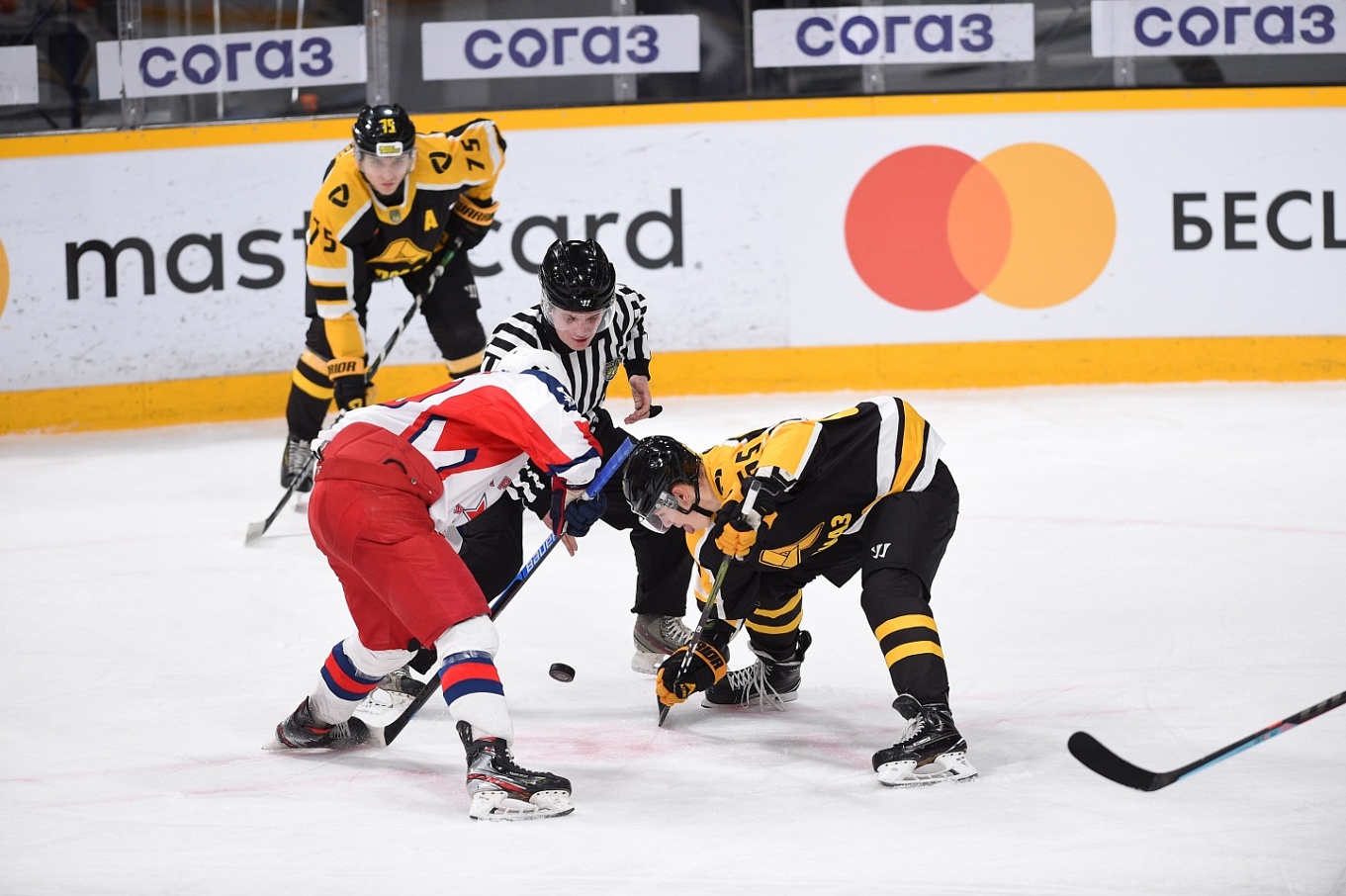 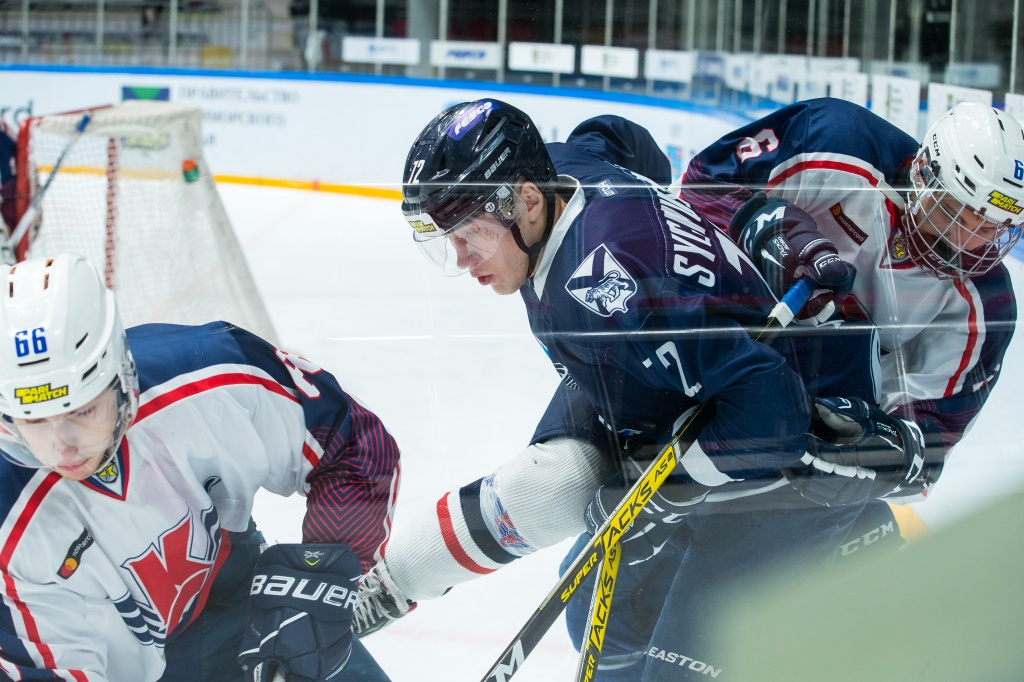 Taifun Primorie Region faced off against Krylia Sovetov Moscow in Vladivostok in the second part of the back-to-back series. The teams had combined for nine goals in the first bout as ‘Soviet Wings’ had celebrated victory. Second game turned out to be much less high-scoring. Moscow outshot Primorie

Region in the opening period of play but had nothing to show for it in the end. Second frame of action yielded no goals either, despite the fact that the visitors had a 2-man advantage over the stretch. Taifun goaltender Dmitry Sharov was on top of his game.

Only early in the third stanza did the visitors finally solve Primorie Region netminder – Krylia Sovetov top-scorer Artyom Didkovsky found the back of the net. Taifun managed to get back even in the last minute of regulation – Ruslan Abdullayev sent it past Maxim Kloberdanets on the final push. Home team went on to win the game in the extra period as Pavel Yelizarov hit the twine three minutes in. 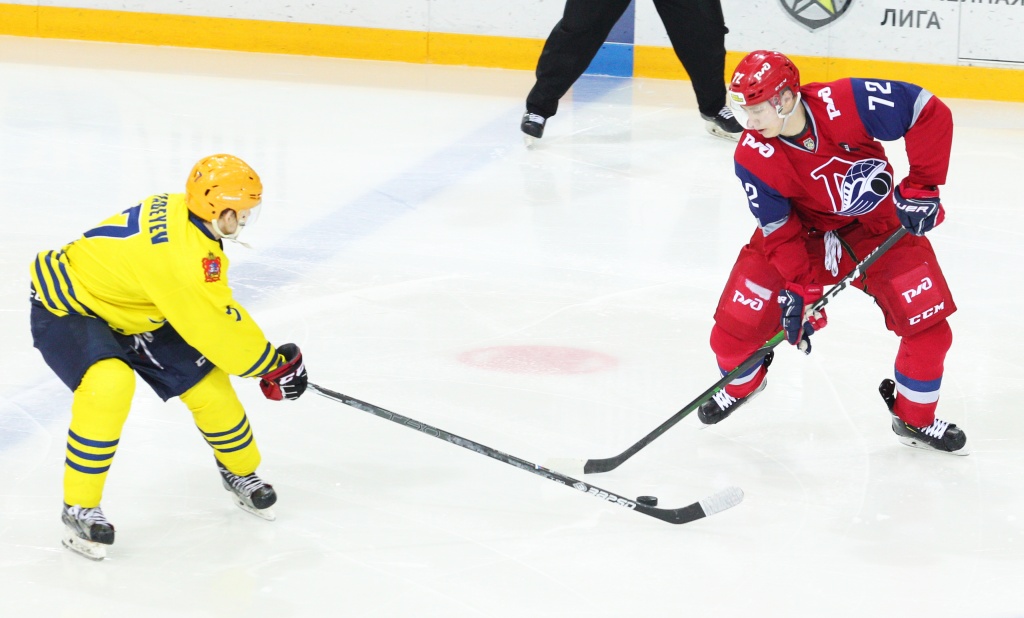 Loko defended the ice JHC Atlant Mytischi in Yaroslavl. Atlant currently find themselves out of the playoff zone and went into the game dying to gain points. However, the ‘railway men’ had their own objectives – with a win at home they would surpass Krasnaya Armiya Moscow for 2nd place in the Eastern Conference. There was no scoring in the opening period of play but Yaroslavl were spending more time in the offensive zone and finally capitalized on one of their chances midway through the second frame as Daniil Tesanov found his target. Yegor Manin skated around the net and delivered a crisp pass to his teammate who made no mistake. The teams headed to the dressing-rooms for the second intermission with Loko leading 1-0.

Yaroslavl improved their lead to 2-0 three minutes into the third stanza – Ilya Nazarov threw the puck in the slot and it went in off defenseman Denis Baranov’s skate. Eight minutes later the visitors got a power play opportunity and solved Yegor Gorshkov – Matvei Nosov had the quickest hands in front of the net and slipped it in. That was all Moscow Region could get in this one. As the final buzzer sounded, Loko Yaroslavl registered a 2-1 win on home ice. 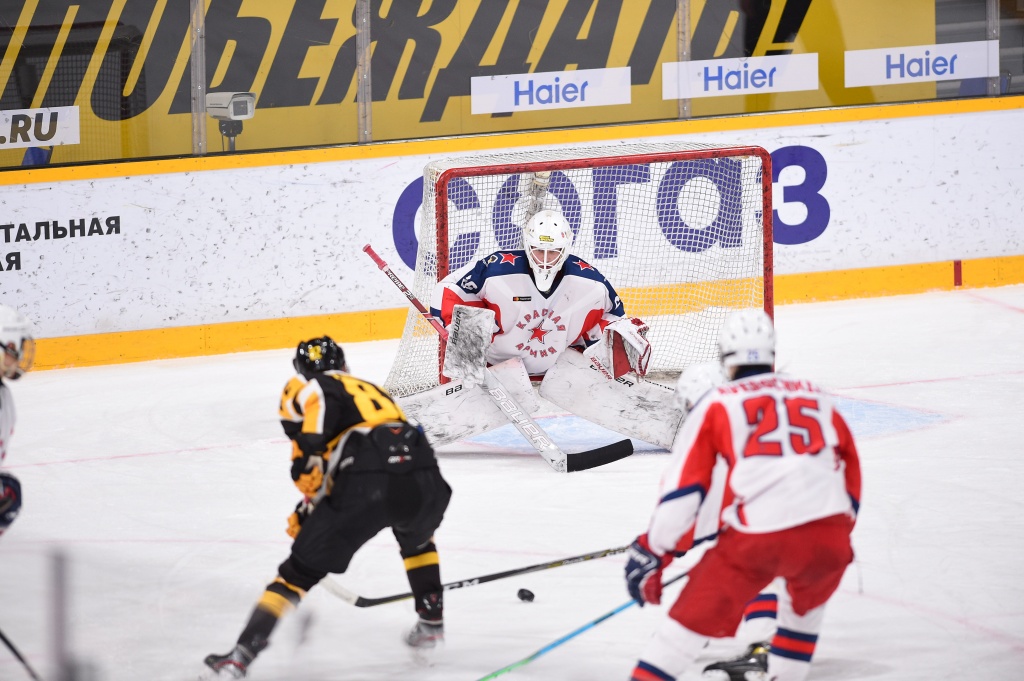 Last game of the day was held in Cherepovets and it was local favorites Almaz who got off to a better start. The hosts forced Krasnaya Armiya Moscow take a penalty early on but the visitors managed to survive it. Almaz players continued to dominate on the ice. They were able to put together more and better offensive rushes, which helped them to get in the lead midway through the first period of action. Yegor Chezganov finished off a passing play, sending it past Moscow goaltender Matvei Kiselyov. Krasnaya Armiya picked up the pace after that and managed to move the play away from their defensive zone. The red-and-blue gradually increased their pressure on Cherepovets netminder Artyom Nazarkin but he was able to cope with every shot he had to face before the first intermission. Home side went on to double their lead late in the period – Dmitry Solovyov hit the target.

After the intermission the teams continued to play fast-paced hockey and exchange scoring chances. Almaz and Krasnaya Armiya kept trading offensive rushes but both Kiselyov and Nazarkin were able to deal with the heat. Nevertheless, Moscow increased their pressure around midpoint of the frame and Yegor Kuzminov brought Krasnaya Armiya back to within one. Five minutes later the visitors found the equalizer as Matvei Averochkin sniped one home. The parity was short-lived – a few moments later Cherepovets regained the lead as Ignat Kholkin was credited with a tally. Moscow once again picked up the pace and did their best to level it again but Almaz were able to keep the opposition at bay. The teams headed to the dressing-rooms with the hosts leading by a goal.

Krasnaya Armiya strived to grab the momentum and pitch camp in the offensive zone and were able to achieve that. However, Cherepovets were able to keep up with the tempo of the game offered by the opposition and responded with quick transition plays. Home team focused on playing solid defense but stayed aggressive to minimize the number of scoring chances generated by Krasnaya Armiya. As a result, the visitors were able to begin their final push only really late in regulation. Nazarkin stood on his head and the visitors came up empty. Almaz Cherepovets defeat one of the top teams of the Western Conference 3-2 on home ice.