HE LOST 15 COLA BOTTLES AND GOT HIS PET FROM KHL’S TOP ROOKIE’S MOTHER. STORIES FROM OMSKIE YASTREBY GOALTENDER HE LOST 15 COLA BOTTLES AND GOT HIS PET FROM KHL’S TOP ROOKIE’S MOTHER. STORIES FROM OMSKIE YASTREBY GOALTENDER

19-year-old Omskie Yastreby netminder Nikita Dianov was born and raised in Omsk where he currently plays on a Junior Hockey League team. The netminder opens up about his hobbies and stories about his teammates Yegor Chinakhov, Semyon Astashevsky and Ilya Mikheyev.

- What do I like to do for fun? It depends on my mood. Sometimes I just want to stay in bed all day and do absolutely nothing. Sometimes I like to go out and be active. For instance, go to an escape-room with Semyon Astashevsky. Right now I read a very exciting detective story Knife by Jo Nesbo. I watch movies and TV series. Last one I enjoyed was Peaky Blinders. As for favorite movies, I really like both parts of Creed. It’s a sports movie and it made me feel a whole range of emotions – proud, anxiety, happiness, tears and grief. Other than that, I’m also a hardcore music fiend. I listen to American rap, pop and hip-hop. Recently, I added The Fire by The Roots with John Legend to my playlist.
- Travelling? I have been to USA. It’s very beautiful. I like how people love over there. I was amazed by New York City, its clean streets and skyscrapers. I would like to travel around Europe. Especially, across Sweden and Finland, which are really to my liking. I don’t even particularly know why but I just feel like visiting these countries.

- It was in early into the season. I always have Semyon Astashevsky for a room on road trips but this time he was making the journey by himself and not with the team, so he wasn’t there in time for our first practice. I was alone in my room and didn’t hear the alarm ring. And there was no one there to wake me up. Albert Alikov’s call woke me up. He told me the team was already in the dressing-room getting ready for the practice. And I was still back at the hotel at the time! I panicked, grabbed my stuff and got to the rink as soon as I could. Fortunately, no one saw me getting in late except for our goaltending coach.
- I recently practiced penalty shots with Ilya Mikheyev. We played for cola and by the end of the practice he owed by two cans. But then he offered me to go double or nothing. I accepted. As a result, I ended up owing him 15 cans! But I didn’t want to stop. I wanted to win if not for the coke but just for the sake of it. I couldn’t do it. Zamboni went out on the ice and we had to wrap it up.
- I have a pet at home. It was given to us by Yegor Chinakhov’s mother. Their cat gave birth to several kittens and it just so happened that my parents were looking for a pet. That’s how Funtik got to live at our place. I also really want to get a dog. Preferably, either a dachshund or a pug. 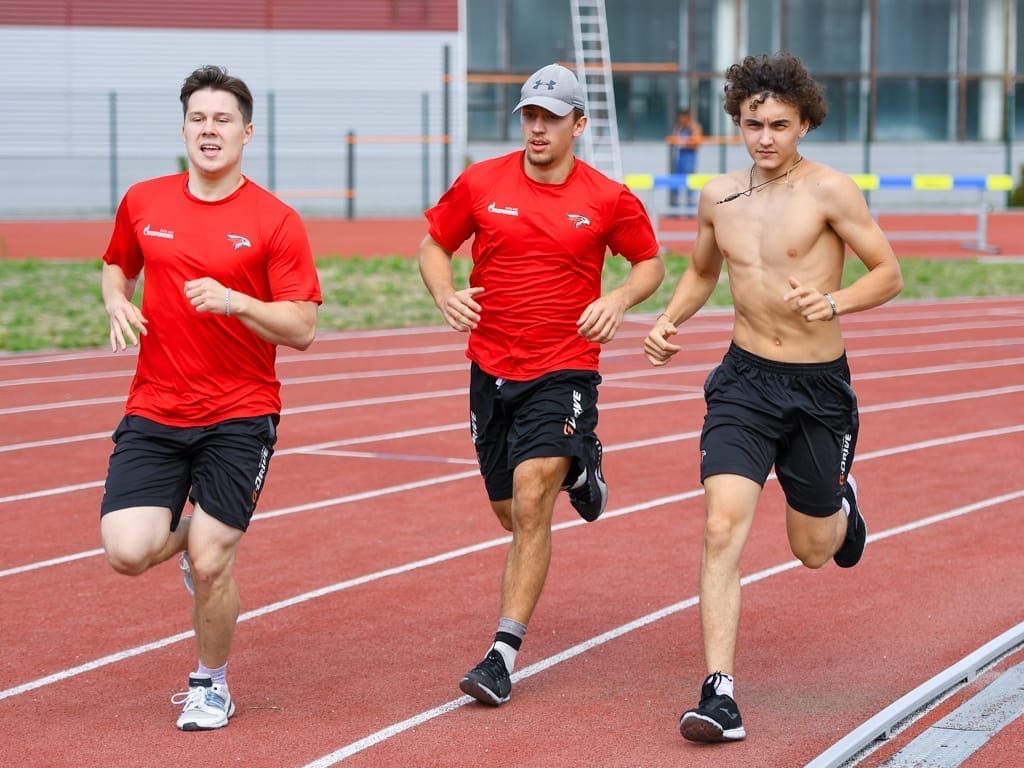 - I like how David Pasternak and Auston Matthews look like. They have a special style. They’re both great at combining classics and athletic wear.
- My wardrobe is full of black clothes. I also have a lot of clothes in white and red colors – those are our team colors. Most often I opt for athletic wear but I can go for classics, too. It all depends on the situation.

- If it weren’t for hockey, I would have been a soccer player. After hockey, it’s my favorite sport. I like soccer for its beauty and ambience. Soccer fans a mad in a good way and they do great performances. I have been a Bavaria fan for seven years already. I like absolutely every single player on the team. But my favorite soccer player is Cristiano Ronaldo.
- Earlier this year I transferred to Siberian State University of Physical Culture and Sports. At first, I wanted to choose a non-sports major but then I changed my mind. Besides, it’s difficult to get any quality education in with our tight schedule. Nevertheless, higher education is very important because life doesn’t end when you retire as a hockey player.