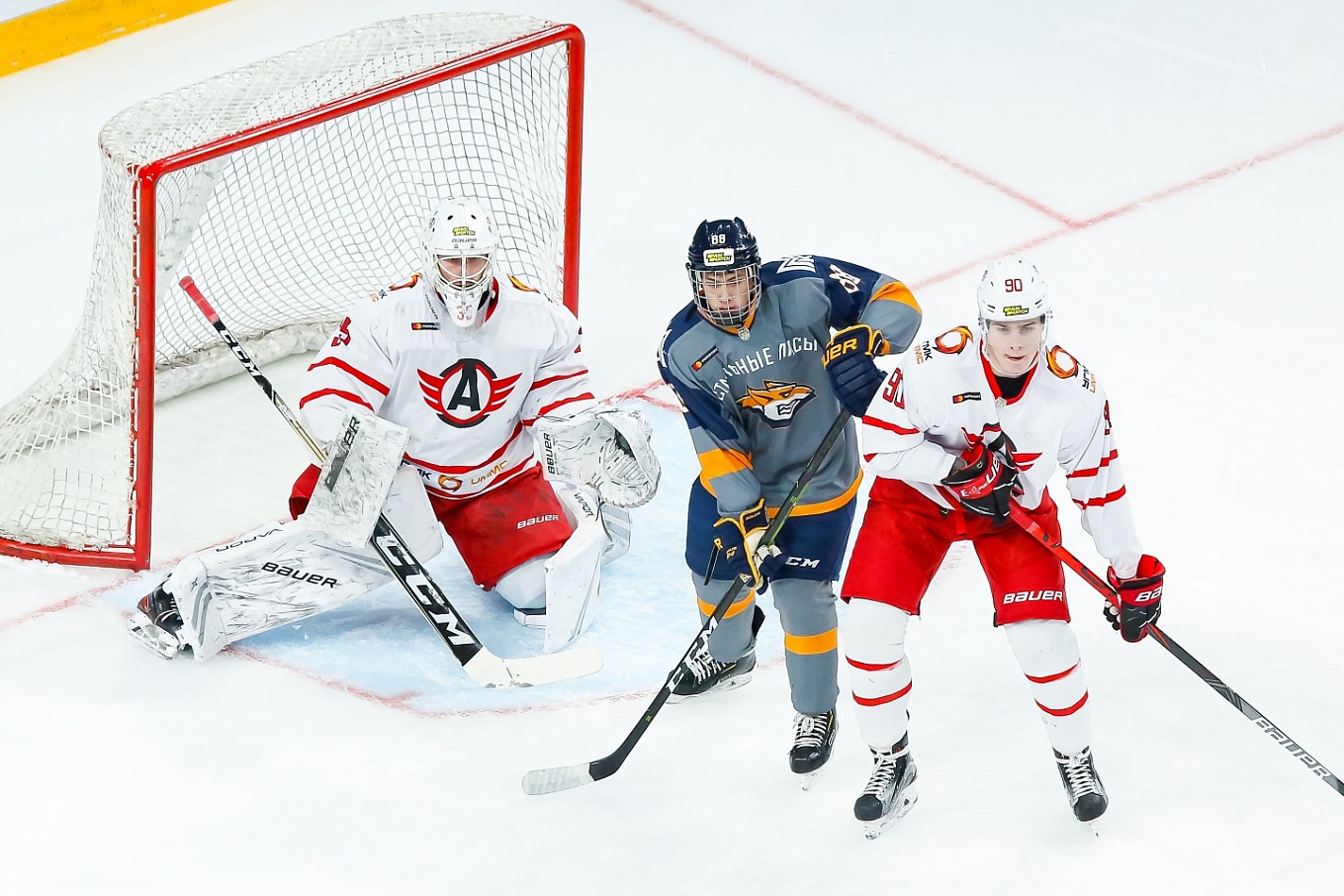 Second game of the day was held in Magnitogorsk as Stalnye Lisy played hosts to Avto. Yekaterinburg battle hard against Irbis Kazan for the first place in Eastern Conference and usually don’t have any trouble facing other opponents. Notably, the visitors conceded the first goal of the game – Vadim Antipin found his target just three minutes in. However, that was all Mikhail Isayev would let get past him in the game. Ilya Loza brought it back to even, while Viktor Nauchev and Danila Okhov got a tally each in the second period of play to give the visitors a 2-goal cushion.

Four minutes into the third stanza Alexander Fomintsev beautifully sniped one just under the bar. Okhov scored his second of the game shortly before the final buzzer, after which the visitors caught Magnitogorsk with a counter-attack. Avto Yekaterinburg enjoy a blowout 5-1 win on the road and surpass Irbis Kazan to climb back on top of the Eastern Conference.

Loko get a solid win over Almaz in Yaroslavl 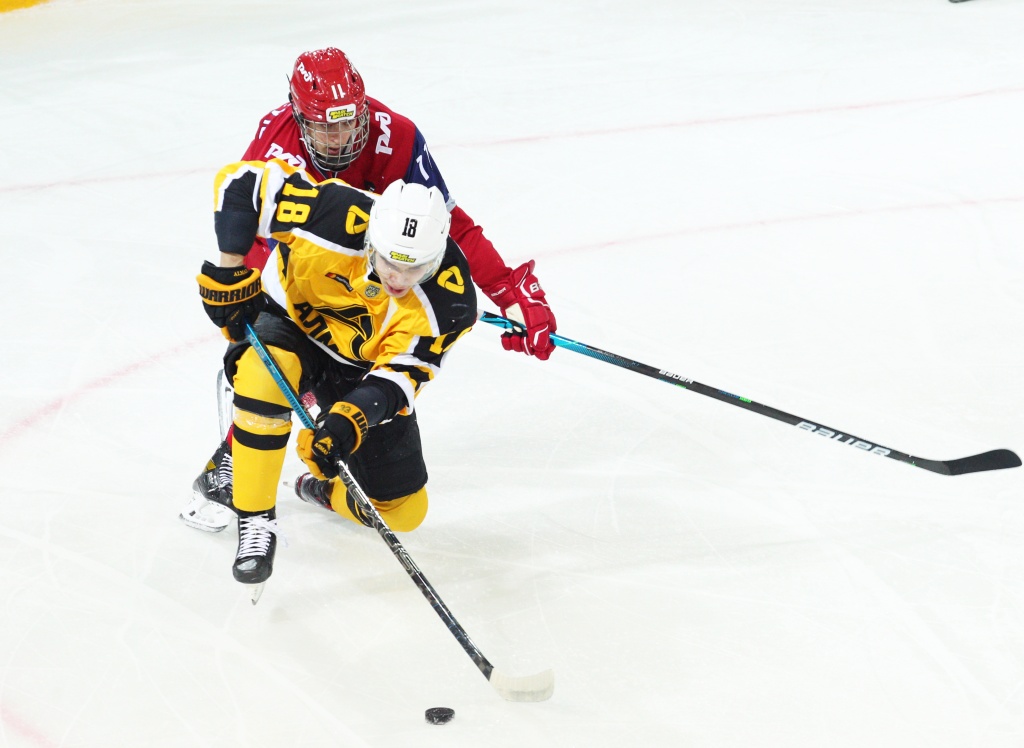 First minutes of the game in Yaroslavl featured home side having the momentum on their side. Goaltender Yegor Tulepov was called to action early in the bout and four minutes in he conceded his first goal – Ilya Chefanov got first to the puck on the rebound and put it home at the far post to give Loko Yaroslavl a 1-0 lead. However, the visitors gradually evened the game out and picked up the pace around the midway point of the stanza, forcing Yaroslavl to make mistakes. Almaz capitalized on one Loko’s defensive mishap – Daniil Belyalov wired it past Yegor Guskov on a delayed penalty call to bring it back to even. Cherepovets put more pressure on the opposition and did their best to capture the lead right away. They managed to force Loko make another mistake but the visitors failed to convert on their initial power play opportunity of the game. As for Yaroslavl, they did make their man-advantage attempt count – Daniil Tesanov one-timed it home past Tulepov to put Loko back in the lead. Half a minute after that Cherepovets took another penalty and Yaroslavl went on to convert on the ensuing power play as well. Ilya Nazarov tucked it home on the far post six seconds before Almaz got their fifth man back out on the ice. Yaroslavl went to the dressing-room with a 3-1 lead after 20 minutes of play.

The hosts got another power play opportunity right after the intermission and they improved their conversion rate to 3-for-3. Tesanov scored his second goal of the game with a nice wrist-shot right into the corner of the net. Cherepovets got another penalty after that but this time they managed to survive for the first time in the game. Almaz also turned the momentum around. Due to increased Cherepovets’ activity Loko players were forced to take three more penalties, which allowed the visitors to pitch camp in the offensive zone. Home team successfully killed off the first penalty, but late in the stanza they found themselves down 2-man. Three seconds after Loko got their fourth man out of the box, Almaz found the back of the net – Dmitry Voinkov helped Cherepovets to get a goal back and close the gap on the scoreboard to just two tallies.

Cherepovets began the third period with another penalty but then the visitors, who went on to successfully kill it off, picked up the pace, looking to tie the game. A lot of their offensive rushes ended with shots and Loko’s goaltender Yegor Gorshkov had a lot to deal with but Almaz couldn’t get anything past him. Yaroslavl responded with quick transition plays and did their best to move the play away from their goal, looking to create havoc at the other end of the ice. The visitors did their best to pitch camp in the offensive zone and late in regulation began throwing everything they had at the opposition. But not only did Yaroslavl manage to keep Cherepovets at bay, they also set the final score of the game with ten seconds remaining on the clock. Stepan Nikulin scored the empty-netter and secured the win. Loko Yaroslavl beat Almaz Cherepovets 5-2 on home ice. 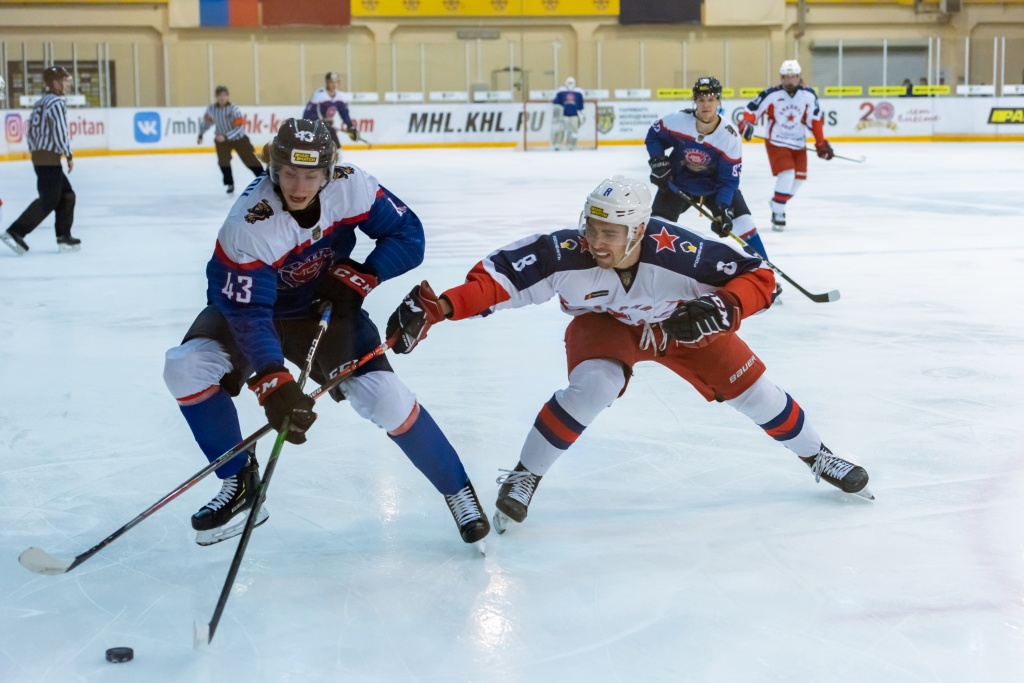 Krasnaya Armiya Moscow got their first scoring chance of the game in the opening minute of play as HC Kapitan Stupino took a penalty but the visitors failed to capitalize on it. Moreover, ‘army men’ went on to give up the momentum as they took three minors over the course of the period, which allowed Stupino to pitch camp in the offensive zone and pepper Vsevolod Skotnikov with shots from all over the place. However, the latter was up to the task and stopped everything he had to face. Once finding themselves back at playing full strength, Krasnaya Armiya pushed forward, looking to get on the scoreboard but Kapitan netminder Artemy Pleshkov was able to stand his ground. As a result, neither Kapitan, nor Krasnaya Armiya managed to break the ice before the intermission.

The teams continued to trade penalties in the following period as well. The visitors took the first minor of the stanza but Skotnikov and his defensemen were tremendous at killing it off. Stupino took the next penalty and this time around Moscow managed to capitalize on it – Danila Karpov sent it past Pleshkov to give Krasnaya Armiya a 1-0 lead. Having captured the lead and driven by emotions, Moscow moved forward, not letting the opposition create anything at the other end of the ice, while Kapitan defense struggled to keep ‘army men’ at bay, including while have a man-advantage. Overall, Krasnaya Armiya took six times as many shots as the opposition in the second period. Pleshkov stopped 17 shots out of 18 and Moscow went to the dressing-room for the second intermission carrying just a 1-0 lead after 40 minutes of play.

However, the visitors were able to double their lead with an early goal in the third stanza – Steven Sardaryan found the back of the net. Moscow continued to dominate on the ice, not letting the opposition even touch the puck too often or taking a single shot against Skotnikov. Midway through the frame Stupino failed to contain Krasnaya Armiya in two consecutive rushes, which resulted in two penalties. Prokhor Poltapov beat Pleshkov, improving the lead to 3-0 for the red-and-blue. As a result, Krasnaya Armiya, who beat Kapitan on the shot-clock by a whopping 22-to-2 in the third frame, had no trouble protecting their lead, shutting the opposition out. Krasnaya Armiya win 3-0 on the road, adding two points to their total.