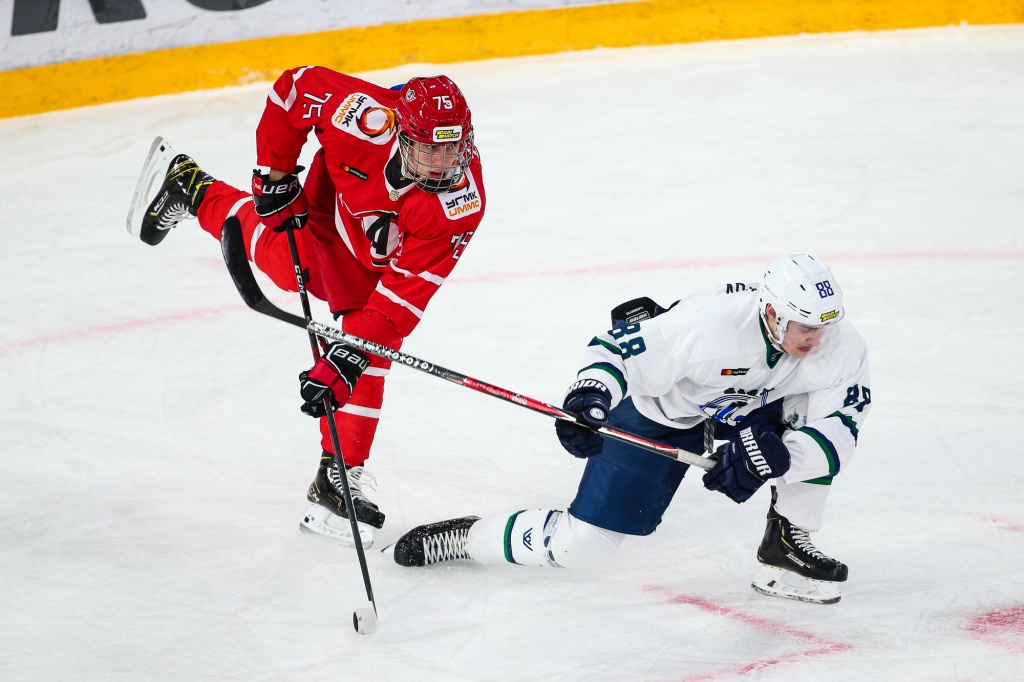 The teams opted for fast-paced hockey in the early minutes of the game. Goaltenders Mikhail Isayev and Ilya Stupin were called to action right away. Both netminders answered the call and Avto Yekaterinburg gradually, despite getting a minor penalty, got the momentum on their side. Stupin had to do a lot more work as Yekaterinburg put a pressure on Mamonty Yugry. However, it was the visitors who opened up the scoring – Ivan Alexeyev slipped it past Isayev on the rebound to finish off one of the counter-attacks and put Khanty-Mansiysk in the lead. Having allowed the goal, Yekaterinburg threw everything they had at the opposition, looking to at least bring the game back to even before the intermission but the ‘Mammoths’ defense didn’t let them make it happen.

The hosts continued to have the advantage in the first half of the second period of action. Once again they moved the play in to the offensive zone and even got a power play opportunity, but the visitors methodically defended their net. However, after some time had passed Khanty-Mansiysk began controlling the puck more often and Isayev had to stay busy after the halfway point of the period. Nevertheless, despite taking a lot of shots, the visitors couldn’t build on their lead. Mamonty Yugry still had just a 1-goal lead after 40 minutes of play.

Yekaterinburg absolutely dominated in the third stanza. Avto picked up the pace and pitched camp in the offensive end just as soon as the play resumed, looking to salvage the game but Stupin parried every shot he faced up until the midway point of the frame, protecting Khanty-Mansiysk’s flimsy lead. But the hosts finally solved him – with seven and a half minutes remaining to play in regulation Stepan Ostrovsky brought it all back to square one with a long shot. Yekaterinburg spent the remainder of the period on the offense, doing their best to get in the lead but the game had to go further than 60 minutes. Nevertheless, it took Avto just 15 seconds in the extra period to score the game-winning goal. Yuri Zhuravlyov sent it past Stupin with the very first shot. Avto Yekaterinburg enjoy a hard-fought 2-1 in overtime on home ice. 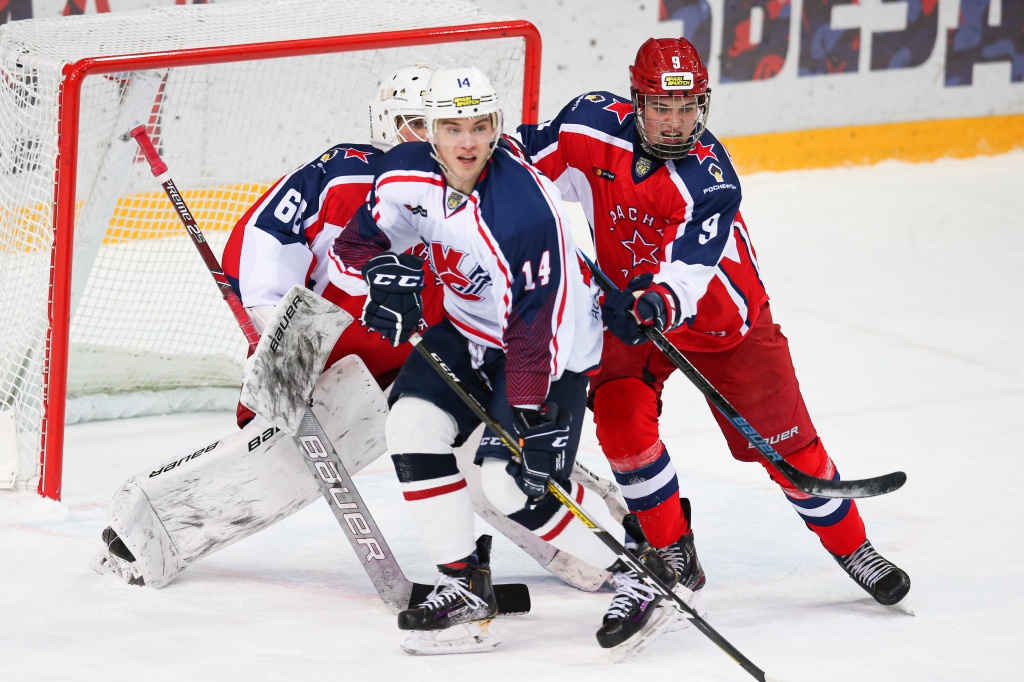 The teams began the game at a rather calm pace. Neither Krasnaya Armiya, nor their Moscow rivals Krylia Sovetov were able to put together a single scoring chances for a long time. However, the visitors gradually became more aggressive, providing goaltender Matvei Kiselyov and his defensemen with steady workload. Home team couldn’t even change the flow of the game on a power play opportunity, which they were unable to convert on. They also allowed ‘Soviet Wings’ to respond with several good quick transition plays. Nevertheless, Setun couldn’t profit from having the advantage and the teams headed to the dressing-rooms tied at donuts on the scoreboard after 20 minutes of play.

The visitors also had the momentum on their side in the early minutes of the second period and got their first power play opportunity of the game. Krasnaya Armiya successfully survived it and finally broke the deadlock with a goal at even strength. Matvei Vasin sniped it past Yegor Naumov to open up not only the scoring but also his goal tab in Junior Hockey League. The game followed a similar scenario to that of the first period later on. Krylia Sovetov seemed to be the better team but the red-and-blue played well defensively and did their best to avoid making any mistakes. However, Krylia Sovetov did get a great chance to bring the game back to even late in the stanza as they were rewarded with a penalty shot – the only problem was that Matvei Petrov failed to slip it past Kiselyov. As a result, despite taking almost twice as many shots as Krasnaya Armiya the visitors had nothing to show for it and trailed by a goal heading into the third period.

They also conceded another goal early in the frame – Prokhor Poltapov found the back of the net this time. Krylia Sovetov players picked up the pace and began playing more aggressively, revealing a lot of seams as a result and the hosts switched to transition plays looking to score another goal and put the game away for good. Midway through the period Krasnaya Armiya got a penalty and Krylia Sovetov finally got a goal back – Maxim Makarov gave his team hope. ‘Soviet Wings’ dominated late in regulation and pulled their goaltender for the extra attacker but to no avail. Krasnaya Armiya worked the clock and didn’t allow another goal en route to a 2-1 win on home ice. 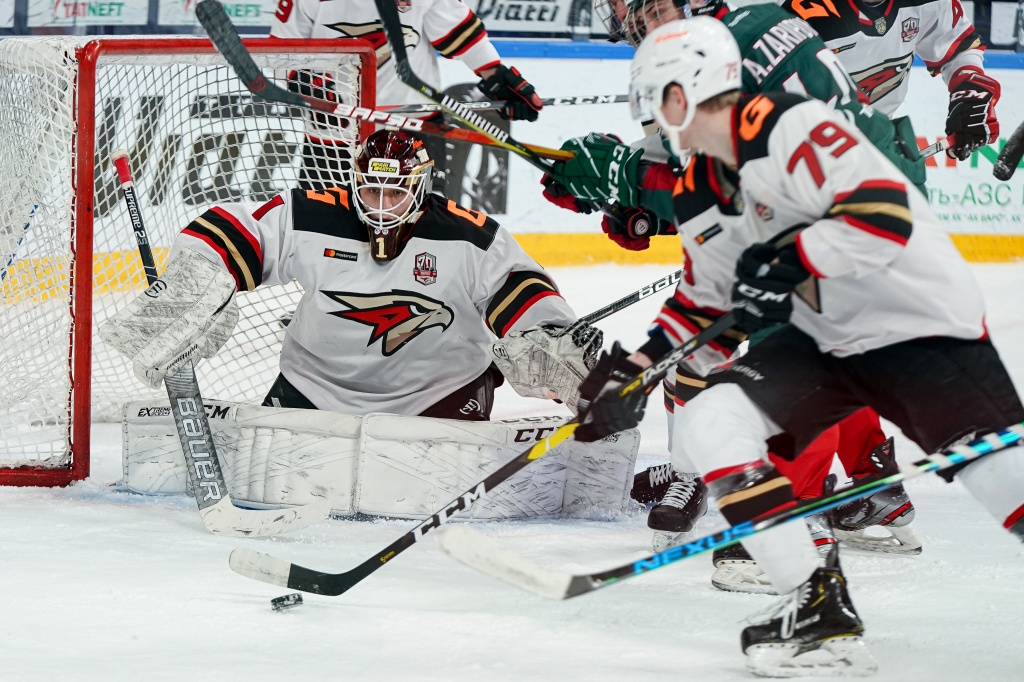 After a short pause Irbis Kazan defended the ice again against Omskie Yastreby in the second game of the back-to-back series. In case of win the hosts were guaranteed stay on top and to keep the 1-point gap between them and Avto Yekaterinburg in Eastern Conference standings. Irbis were able to succeed in that goal, scoring three unanswered goals against the mighty opposition. They opened up the scoring shortly before the first intermission – Savely Kuvardin hit the twine, beating Andrei Mishurov 18 minutes into the game. Home team solidified their success in the next frame and it took them less than a minute.

Danil Grigoryev doubled the lead for Kazan 12 minutes into the period and in the very next shift Vladislav Fyodorov made it a 3-0 hockey game. Omskie Yastreby played a lot better in the third stanza but couldn’t even eke out a consolation goal. Vladimir Mosin stopped all 36 shots he had to face in this one and Irbis Kazan beat Omskie Yastreby 3-0 on home ice.

In the last game of the day HK Riga played hosts to Loko Yaroslavl, who went into the bout following two consecutive losses to JHC Dynamo Moscow. Yaroslavl grabbed the momentum right out of the gate and managed to open scoring on a power play – Junior Hockey League top scorer Ruslan Abrosimov added another goal to his ever-growing total 15 minutes into the game. Three minutes later he scored another marker at even strength to double the lead for Loko. The visitors spent ever more time in the offensive zone in the second period of action but had nothing to show for it. As for HK Riga, they took just four shots on Yegor Guskov.

In the final period of play the hosts did a little better but that wasn’t enough to even get on the scoreboard. Yegor Guskov went on to stop all 22 shots he had to face as Yaroslavl snapped their 2-game losing streak and caught up to Russkie Vityazi in Western Conference standings. The two are now tied for third place.