NOT A WORD ABOUT HOCKEY. DMITRY KULIKOV JHC Spartak
News
“We’re going to put up a fight against Canada!”. Michkov, Miroshnichenko and Leschyov comment on their win at U18 World Championship semifinal
“Now I have to work twice as hard”. Bogdan Trineyev comments on his road to Junior Hockey League’s coveted trophy
“We want to have two Yaroslavl teams in Junior Hockey League”. Alexander Ardashev opens up about unsuccessful finals, KHL players’ problems and Daniil Gutik
“It doesn’t matter how I play. What’s important is that leave with gold”. U18 Team Russia players and coaches comment on their win in quarterfinal
“Coach told us not to respond to dirty plays”. Koromyslov, Poltapov and Leschyov comment on Russia’s win over Czech Republic at U18 World Championship
“The more you yell, the less they listen”. Yaroslav Lyuzenkov built a championship team, which had missed the playoffs for four straight years
“We got carried away and lost the momentum”. Miroshnichenko, Yurov and Leschyov comment on Team Russia’s first loss at U18 World Championship
“Plan B worked out”. Michkov, Chibrikov and Leschyov comment on Team Russia’s comeback against Team USA
Not a word about hockey
NOT A WORD ABOUT HOCKEY. DMITRY KULIKOV
Share

In today’s edition of our continuing Saturday series Not A Word About Hockey we’re going to sit down with JHC Spartak Moscow goaltender Dmitry Kulikov. The 19-year-old netminder is in his third season with the red-and-white. In this interview with Junior Hockey League media relations department he shared what is awesome about sports movies, why one shouldn’t be superstitious and how his mother helped him to make a career choice.

- I live at the baza and that’s where I eat, too. So it’s our team doctor who decides on my diet. When I visit my girlfriend I eat everything she cooks. As for unhealthy foods, I like fast-food but I rarely opt for it.
- My parents have a pet. It’s a cat named Barsik. Currently, I’m in no position to have a pet.
- During the season I usually spend most of my days off sleeping. I like going for a stroll in the evening. Sometimes I perch over books, although I will admit that it rarely happens. I like watching hockey on TV, miscellaneous interviews on YouTube and getting to know new people. Along with forward Pavel Petrov and defenseman Artyom Serikov we play videogames and it gets quite competitive. Sometimes we can play for several straight hours (laughs).
- I dream of visiting all countries, especially USA. I have a great desire to visit Los Angeles and go to local team’s games. I really want to believe that my dream will come true.
- I enjoy movies about sports. My favorites are Legend #17 and Moving Up. They motivate and inspire. I would also like to mention Temporary Troubles, which moved me by its plot. You feel like thinking about a lot and never giving up after watching it.
- I’m a music fiend. If I like a song, I add it to my playlist right away. The latest track I have added to my playlist was Vecherinka by Skyptonit.

- I’m a calm person. I enjoy a good laugh, I don’t let myself get sad and I do my best to see positives in everything. Perhaps, that’s my biggest upside. As for my shortcomings, you would be better off asking people around me about them.
- I don’t have problems with motivation on gamedays. I always eagerly await the next game and step on the ice in great mood.
- A real man must first of all be responsible and think out his actions well.
- My mother is a great example of humanity. She taught me to never give up, always move forward and be persistent in achieving my goals. She showed me by her own example how to be strong and always move forward.
- Whenever I meet a new person, first thing I always pay attention to is how they talk. When a person is easy and open, you can always find common ground with them.
- I’m superstitious at all because I believe that in this world everything depends entirely on us.
- As for gambling, it depends on what you mean by it. If it’s sports-related, then I could be considered a gambler. 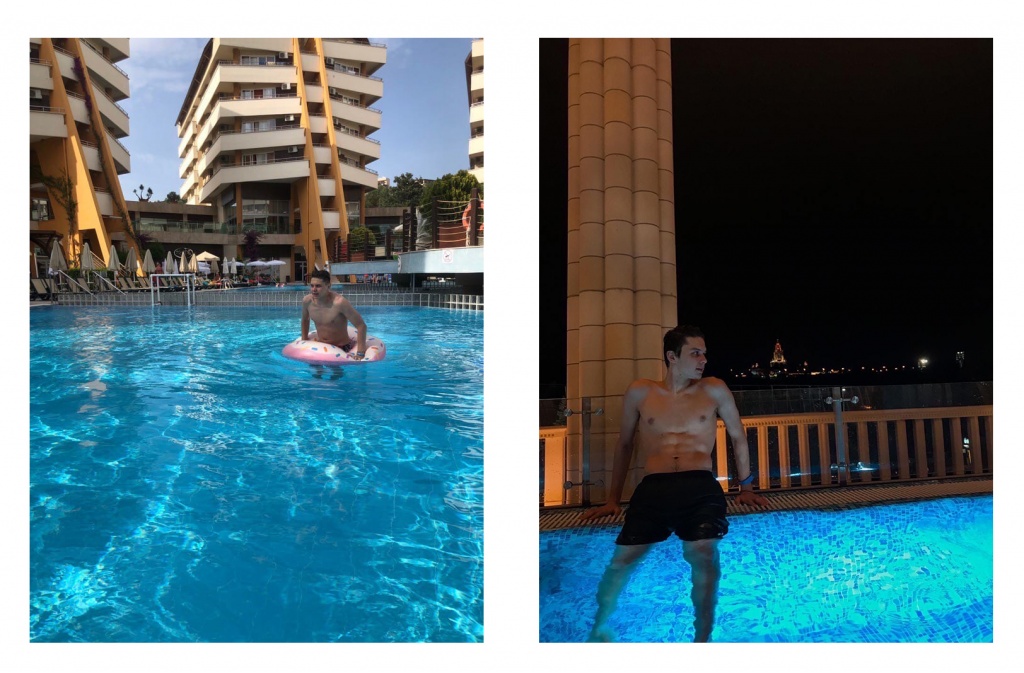 - I don’t have a role model in men’s fashion. I don’t follow fashion and I don’t care what people around me wear.
- I don’t pay attention to clothing brands because I rarely buy anything. But it’s mostly athletic wear because that’s what I prefer in everyday life. There are a lot of red clothes in my wardrobe. I play for Spartak after all (smiles).
- Hugo Boss is my favorite perfume. My loved one gave it to me as a New Year’s present and I really enjoy the scent.
- I can’t really grow beard. When I don’t shave for a while, my girlfriend tells me right away when she sees me, ‘Go and shave it off!’ (laughs) Seems that I look better without it.

- I have a girlfriend. Her name is Kristina. She works in Internal Revenue Service. She watches hockey only if I play. She always supports me and worries about me and I’m very grateful for that! She’s sincere, loving and caring, which is very important for me. We’re on the same page with her.
- I met Kristina at an ice rink. She came to her brother’s game and we accidentally bumped into each other at a coffee machine and started talking. And a few years later when I went to the seaside with my friends we happened to be in the same group.
- If I’m going to have a son, I would obviously like to sign him up for a hockey school. If I’m going to have a daughter, she won’t miss out on sports either.

- If it weren’t for hockey, I would have been a basketball player. I enjoyed the sport when I was a kid and even went to basketball school but it didn’t last very long.
- I graduated from College Of Modern Management. I studied online so I didn’t even know my classmates.
- Education is an important thing. Although, I have note right away that in the Internet era some are able to educate themselves without it.

- In my rookie Junior Hockey League season in the game against Krasnaya Armiya Moscow I took black pants and forgot my red socks. I didn’t tell anybody. I looked for them but couldn’t find anywhere and I thought that no one would notice it. I came to the warm-up and coaching staff decided to dress Ruslan Novruzov for the game. But he gave me his pants and I stayed on them bench in them for the entire game. I had to pay a fine after that.

Not a lot of people know that I was my mom who brought me to hockey. She asked me herself if I wanted to try it and I’m still grateful for that today.