“WE EVEN PLAYED INJURIES – THERE WAS NO OTHER WAY”. FJODOROVS COMMENTS ON HK RIGA BEATING SKA-1946 WITH A SHORTENED ROSTER

HC Riga
News
“The more you yell, the less they listen”. Yaroslav Lyuzenkov built a championship team, which had missed the playoffs for four straight years
“We got carried away and lost the momentum”. Miroshnichenko, Yurov and Leschyov comment on Team Russia’s first loss at U18 World Championship
“Plan B worked out”. Michkov, Chibrikov and Leschyov comment on Team Russia’s comeback against Team USA
JHC Dynamo Moscow wins Kharlamov Cup. Quotes from Krasnogorsk
“There was an offensive gesture from Dynamo’s side”. Loko comment on losing 4-1 and taking emotional penalties
“We are proud of our team”. Kazan managements weighs in on Irbis’ season
“What we saw wasn’t junior hockey but a men’s game with thought”. Kharlamov Cup Finals first games analysis
13 KHL players, shortened roster and focus on studying. HK Riga head-coach isn’t afraid of anything anymore
News
“WE EVEN PLAYED INJURIES – THERE WAS NO OTHER WAY”. FJODOROVS COMMENTS ON HK RIGA BEATING SKA-1946 WITH A SHORTENED ROSTER
Share

HK Riga played hosts to SKA-1946 St. Petersburg in Latvia on November 4th and 5th. However, all of Riga players who had returned from the recent road trip had been quarantined, which meant that head-coach Valery Kulibaba had to urgently call reinforcements from KHL’s Dinamo Riga.

“That meant that almost everyone had to play three games in three days. First they faced Barys [Nur-Sultan] in KHL and then went up against SKA-1946 [St. Petersburg] in Junior Hockey League. Although, we had been warned before the game in Kazakhstan that we might have to go back home and play in JHL so it wasn’t exactly a surprise for anyone,” says HK Riga forward Denis Fjodorovs.

Due to a large number o players being quarantined Riga dressed just ten skaters and two goaltenders for the games against ‘army men’.

“Coaches gathered everyone they could among those who weren’t quarantined at the time,” continues Fjodorovs. “What can I say, it’s tough to play with just two full lines. On top of that, we were getting minor injuries over the course of the games. Some guys got hands slashed, some were hit in places where there’s no protection. But everyone had to go out and play – there was no other way. Everyone understood that missing a shift would mean that his teammate simply won’t get enough rest. So we played through difficulties and pain. We battled for one another.

“When we would run out of gas completely, we would play a few tricks to get a chance to get at least some rest. Sometimes we would ice the puck to catch a breath during a stoppage of play, or would pin the puck to the boards. Every second of rest mattered.”

Moreover, among ten Riga players only Ernest Osenieks and Nikita Mateiko were defensemen.

“We placed our center forwards on defense. They would switch back and forth between offense and defense,” explains Fjodorovs. “I also had to play defense in the first game. I believe, I did pretty well on my new position all things considered, although at first it felt really unusual. As the game went one, I adjusted to my new responsibilities. Even when I felt like joining the rush, I didn’t have the energy for it.” 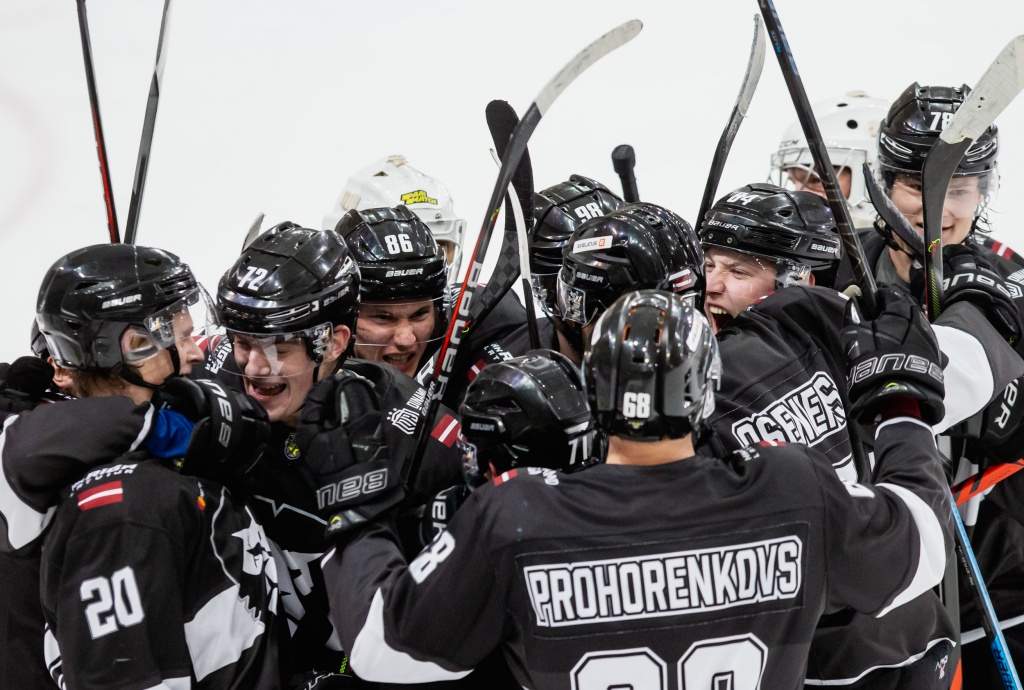 Riga had to draw energy from everything. The team even skipped pre-game skate prior to both games.

“The thing is that we came to the rink just an hour before the first game. We had to wait for a long time for our COVID-19 test results to come back,” says Fjodorovs. “Only when we had received confirmed negative results were we able to leave the hospital. We simply didn’t have enough time for pre-game skate. All we could do was do a little off-ice stretching. We decided that we had a very difficult and long game ahead of us so we needed to conserve energy. Obviously, it felt a little peculiar not to have a pre-game skate and it was tougher to get into the rhythm of the game at first.”

St. Petersburg went on to win the first game of the back-to-back. Riga scored twice early in the game but ended up conceding four goals.

“We were aggressive early on in the first game. We had a very experienced and older group of guys who had played in KHL before. As for SKA-1946, they have a pretty young team so we were outplaying them in the first half of the game due to being more experienced. I believe, going up 2-0 played a bad trick on us. After scoring that second goal we felt that the game was going our way, so we picked up the pace and stopped conserving energy. And it’s impossible to play fast-paced hockey with just ten players dressed for the game. We simply didn’t have the energy late in the game,” points out Fjodorovs.

Second game of the back-to-back turned out to be more dramatic. HK Riga came back from behind three times and then edged SKA-1946 4-3 in overtime.

“Everyone thought that the second game of the back-to-back would be even tougher physically-wise. But our bodies adjusted to heightened workload and it felt like we got second wind. At certain times it felt as if we had full four lines.

“Last minutes of the second game proved to be the most difficult. After we managed to tie the game up for the third time SKA-1946 dominated for seven minutes and did everything they could to avoid going to overtime. Playing shorthanded was really tough in the last minutes and it took a lot of energy out of us. I played almost whole two minutes in one shift over the stretch. I couldn’t feel my legs and breathing was an issue. It was hard to go back on the ice after that,” says Fjodorovs.

“I will remember this game for my entire life and I will be proud of the win!”, concludes Fjodorovs. “I believe everyone has already seen video from our dressing-room after the win. It was an indescribable feeling! Everyone knew that we pulled off something amazing and that we won against all odds. We realized that we’re a real team, bonded, tenacious and with character!”.