NOT A WORD ABOUT HOCKEY. MAXIM MAKHRIN NOT A WORD ABOUT HOCKEY. MAXIM MAKHRIN

In today’s edition of our continuing Saturday series Not A Word About Hockey we’re going to hear from one of the top JHC Dynamo Moscow players and former Sarmaty Orenburg and Omskie Yastreby forward Maxim Makhrin. He shared that not all hockey players are lured by travelling, what dangerous can one encounter rolling into a wrong town and stated that not being tall isn’t automatically bad for a player.

- Our team doctor decides on my diet. I eat whatever they give me. I’m not fussy about it. Solyanka is my favorite meal. As a matter of fact I really like Russian cuisine and our traditional dishes.
- I don’t have any pets. I wouldn’t say that I like pets much to own any.
- On my days off I like strolling down the city. Sometimes I play videogames.
- It’s difficult to name a country I would like to visit or any country I have a burning desire to see. I much rather prefer to stay home on vacations. So I’m not that interested in travelling.
- My friends and I have a variety of activities on our days off. We can go to the movies or some restaurant. I enjoy going to the countryside with my friends from Omsk.
- Fast and Furious is my favorite movie. The energy, the racing – it’s always fun to watch all that. As for TV series, I enjoyed Game of Thrones. The plot is exciting. I enjoyed watching all seasons.
- I like actor Sergei Burunov. He’s charismatic and talented. His characters are always peculiar and with a great sense of humor.
- I listen to everything when it comes to music. The latest track I have added to my playlist was Mamacity by Yanix.

- I’m a kind, patient and persistent kind of guy. My biggest shortcoming, in my opinion, is that sometimes I’m far too kind to those around me in certain situations. Sometimes I shouldn’t be like that.
- A real man must be responsible not only for himself and his actions, but also for his family. I believe that’s one of the key qualities.
- From my parents I inherited a lot of positive traits. I’m grateful to my family for my upbringing.
- Whenever I meet a new person, first thing I look at is their sense of humor. It’s very difficult to hold a conversation with people without it.
- Just as many other hockey players, I’m superstitious but I won’t go into details on the matter.
- I believe that you should be a bit of a gambler in every sport and it’s especially true if you’re on the ice.

- I don’t have a role model when it comes to men’s fashion but on JHC Dynamo Moscow Mark Katsevich looks very good. He’s got taste when it comes to fashion. I think, he’s probably the most stylish of all of us.
- I don’t pay attention to clothing brands or anything like that. There are a lot of black clothes in my wardrobe. I prefer athletic wear in everyday life.
- I have a perfume, which I use regularly, but I don’t remember its name (smiles)
- I can’t grow a beard right now so I go without it. 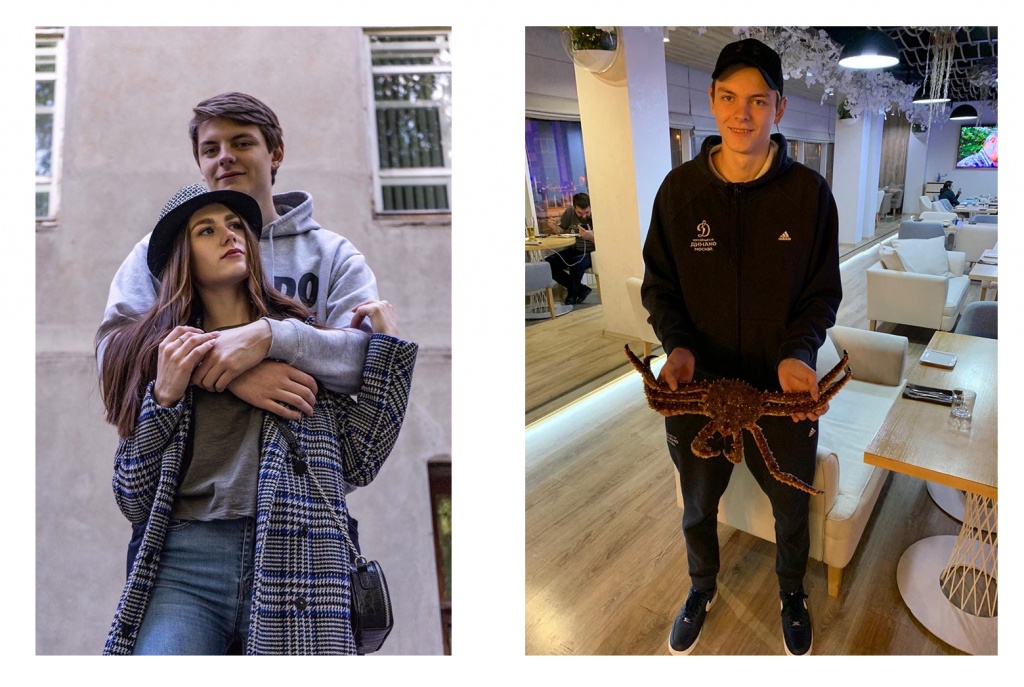 - I have a girlfriend. Her name is Valeri. She currently studies at Timiryazev Institute. She really wants to get her head around hockey. She always cheers for me and worries. We used to be classmates and that’s how the relationship started.
- To me a serious relationship is a necessity. Feeling my loved one’s support is very important for me. I cherish it very much.
- When I’m going to be a father, I wouldn’t want my daughter to be in hockey. In any case, I won’t sig her up for a hockey school myself. As for my son, why not? If he’s going to want it, that’s only going to make me happy.

- If it weren’t for hockey in my life, I would have been in soccer. I can’t imagine myself outside of sports. Sports is my everything.
- I study at Siberian State University of Physical Culture. My major is coaching. I don’t have the time to come to classes so I study online. I know some of my classmates but not all of them.
- It’s very important to get a higher education. Hockey life won’t last forever so I have to have another profession as a back-up and be a high rank specialist in it to keep moving forward.

- A funny story happened to me last year. I was going to join Sarmaty [Orenburg] and mixed up the names of the cities. I flew in Orenburg when I was supposed to go to Orsk. I pay more attention to things like that now (laughs)
- Not a lot of people know that I was the shortest player on every team I played for until I turned 18 and then I had a growth spurt. I’m now 6’3 and one of the tallest players on the team.