ANDREI FEDOTOV: “HOPEFULLY, I CAN WIN ANOTHER JHL MEDAL AS A COACH” 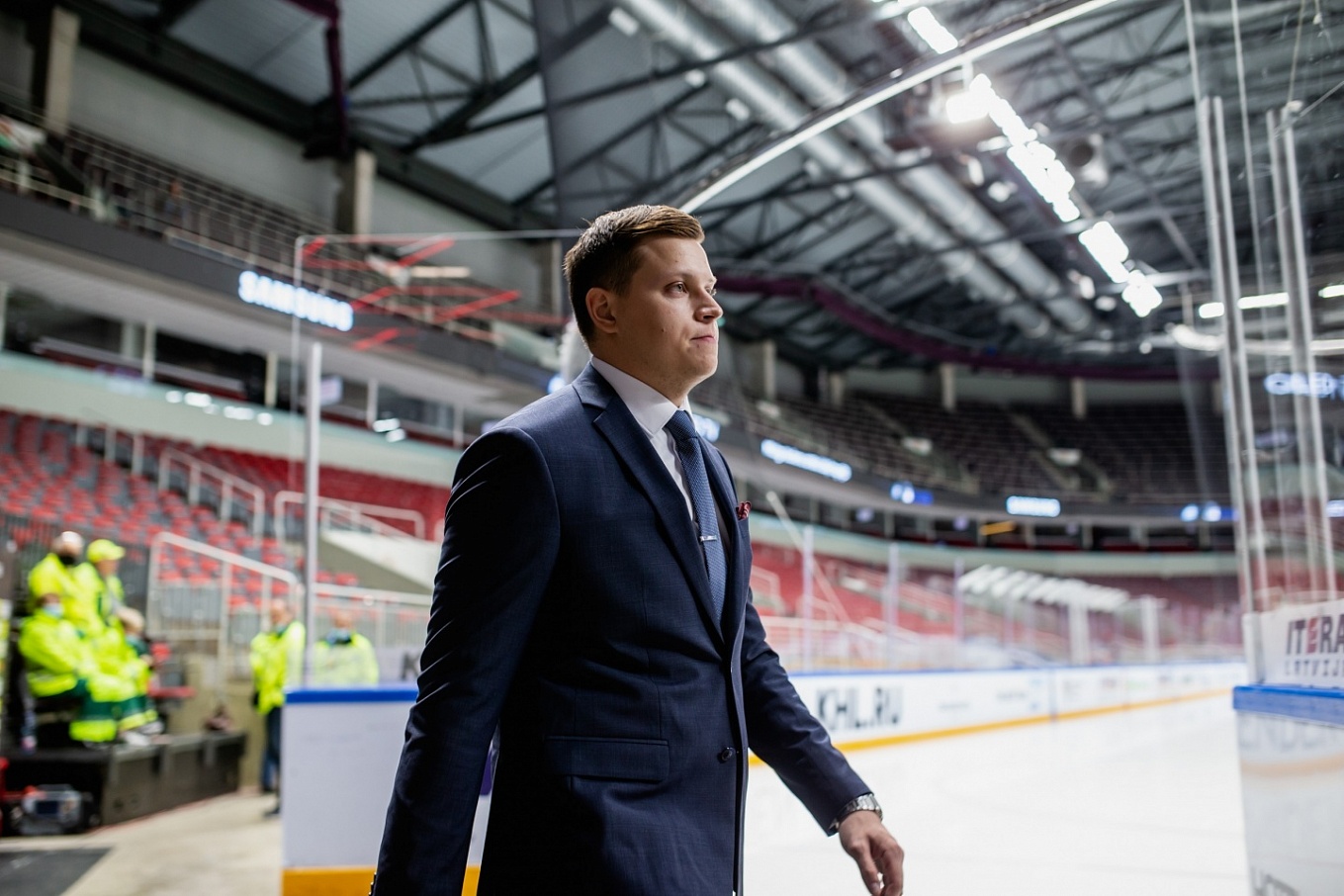 Interview
ANDREI FEDOTOV: “HOPEFULLY, I CAN WIN ANOTHER JHL MEDAL AS A COACH”
Share

26-year-old Andrei Fedotov joined Sakhalinskie Akuly new coaching staff prior to the start of the 2020-21 season. Just six years ago Fedotov was a Junior Hockey League player and won Junior Club World Cup as a member of JHC Spartak Moscow. He’s currently one of the youngest coaches in the league. In this interview to JHL media relations department Fedotov speaks about his early retirement, nuances of working in Yuzhno-Sakhalinsk and his first coaching experience in the league.

As a player Andrei Fedotov spent two seasons in Junior Hockey League. In 2012 he made his league debut as a goaltender with two games for Tyumensky Legion and then began the 2014-15 season by winning Junior Club World Cup with JHC Spartak Moscow.

“It was a very unpredictable tournament. Our team got lucky a few times and everyone really helped us, the goaltenders,” looks back Fedotov. “We began with two losses but found our rhythm after that and made it to the final, in which we beat the hosts of the tournament – Tolpar [Ufa]. I keep that gold medal at home along with my other trophies. Now I’m back in JHL and hopefully I can add to my collection another medal of the league. Now as a coach.”

The 2014-15 season was Fedotov’s last as a player. After playing 16 games for the red-and-white, the goaltender moved to Khimik Voskresensk and hung up his skates after the season was over.

“I knew I wanted to be a coach even back when I was a player,” shares Fedotov. “For the most part it was the injuries that made me retire when I was just 21 and I became a coach almost immediately. I worked for five years at Morozovo junior hockey school. I also coached goaltenders of junior team FSO Moscow Hockey for a few years. Those kids are about the same age as JHL players. That experience really helps me now that I’m with Sakhalinskie Akuly.”

“Besides, I have had my personal camp for several years already. Many players come every year. For example, young goaltender Ivan Prosvetov, who is within Arizona Coyotes system, has come to my camp for three straight years. Although, my former Spartak teammates are yet to come to my camp. For instance, Alexander Trushkov, who is with KHL’s Spartak these days, hasn’t come once to my camp,” jokes Fedotov.

Fedotov played in Junior Hockey League under Vladimir Tyurikov among others. The latter is still the head-coach of JHC Spartak Moscow. This season the two coaches will go head-to-head for the first time as colleagues.

“We have already run into each other in pre-season games,” says Fedotov. “I’m still on good terms with everyone on Spartak coaching staff. I was happy to see everyone. To stand behind the bench against Vladimir Tyurikov, to coach against his team – it’s a great experience! After the game we found time to sit down and talk.” 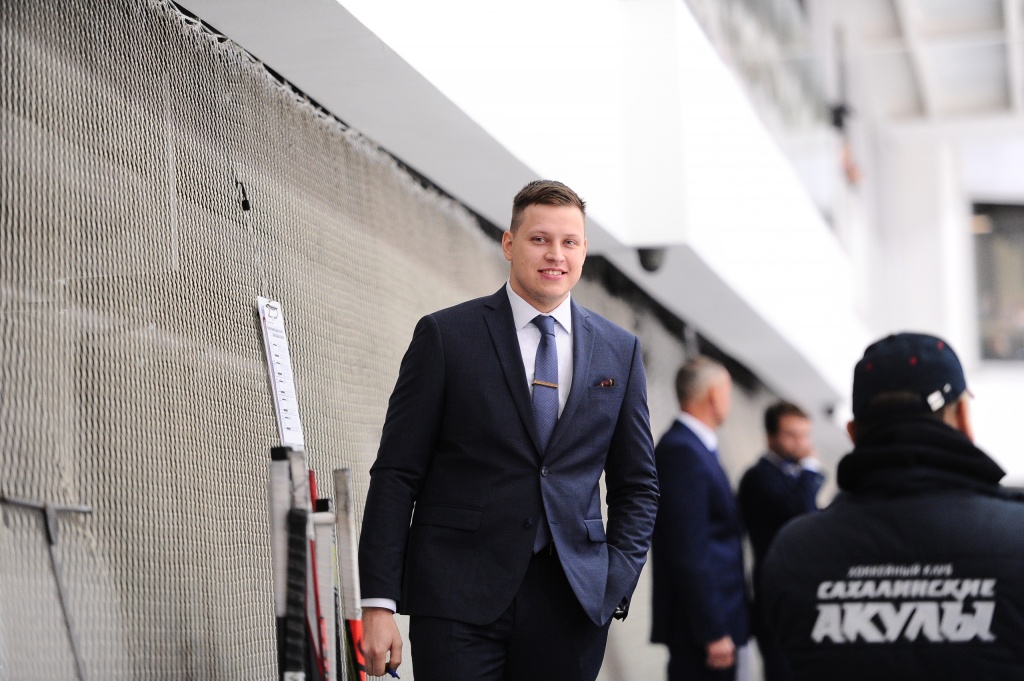 Fedotov became Sakhalinskie Akuly goaltending coach in the summer of 2020. The ‘Sharks’ have become the first professional team of his career.

“In the off-season I was contacted by Sakhalinskie Akuly sports director who offered me the job. They knew me in the club from my past work and decided to make me an offer. JHL is a new challenge for me and a new career step,” says Fedotov.

“Sakhalin nature is very beautiful. There is sea, rivers and forest. The views are amazing! Also Sakhalin is a very athletic island. I’m not exaggerating. Local people worship sports and many are members of various sports organizations. Sakhalinskie Akuly have great fans. Not only they support the team from the stands and come to every game, but they also follow closely the team’s life, statistics and social media. Before the quarantine we had sold-our crowds at almost every game,” added he.

Returning to Junior Hockey League five years after this last game, 26-year-old Fedotov became one of the youngest coaches in the league.

“Despite the fact that I’m not much older the most experienced players on our team, the subordination is still there,” notes Fedotov. “Age doesn’t affect work at all. The players don’t patronize me and we have a good work relationship. We work for the same cause and that brings us together.”

In the first six weeks of the regular season Sakhalinskie Akuly managed to get just one win. Goaltender Semyon Mayko played a huge role in the victory over Amurskie Tigry Khabarovsk as he stopped 36 shots.

“Every game is key for me at this point. I want to win and it’s the mindset I want all of our players to share. Unfortunately, due to coronavirus the situation on the team is unstable, many guys ‘fall out’. But working under these circumstances is also an experience. We work a lot with our goaltenders. All of my goaltenders are of about the same level. I’m happy that all of them make progress and learn something new. I’m certain that this year is going to be a step forward for all of them.”

Sakhalinskie Akuly had a unique road trip in October as they played four games in four days in Riga, Latvia.

“The away games in Riga were the toughest this season,” admits the coach. “It all began with a long trip to Latvia. First we had an 8-hour flight from Sakhalin to Moscow and then we bused it for almost 23 hours from Moscow to Riga! So we crossed the whole of Russia three times faster than we travelled to Latvia! It was hard on the boys. The long trip and change of times zones showed. It was especially hard on the rookies.

“And after the trip and several postponements we had to play four games against HK Riga in a row. One game per day. It was very difficult for all of the guys. They won’t have to deal with anything like that ever again. The team went through the challenge decently. It’s frustrating that we didn’t get any points but, hopefully, our best games are still ahead of us.”